Why do I keep committing suicide?

So for some odd reason, every now and then my Flicker Slayer will commit suicide.

I have taken the proper precautions, so I thought: 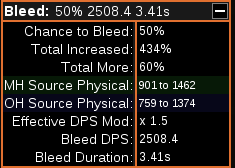 So, at least in theory, I should never be committing suicide. If bleed instances are always lower than leech instances. I've linked my PoB in case anyone wants to take a look at it. Yet somehow, I still keep committing suicide. This is extremely irritating because it happens when I least expect it. I could be leapslamming my way to the boss and all of a sudden I get hit with a massive bleed degen and die right away.

Why do I keep getting struck by bleed?

The maximum leech duration is 5 seconds, but only if you're dealing enough damage to reach that amount. It's possible you simply don't deal enough damage and the leech only lasts maybe 2 seconds instead.

Is it for sure bleed degens that kill you? Maybe there are chaos or other ground effects instead, especially if deaths are happening around metamorphs. Having maximum resists is pretty standard for end game and you are just a bit short.

Check your character sheet and/or gear to see if you have any added chaos damage modifiers. I think that Poison may be instant killing you because resistances for this type of damage is typically negative for the average player. Physical damage and Chaos damage has a chance to inflict Poison, and since it bypasses energy shield. Given flicker strikes innate mechanic to be everywhere at once, you're probably applying way more Poison stacks to yourself than you can mitigate.

2
Why is my Raised Zombie glowing green?
14
How do people commit suicide?
2
Why I don't see the “join pvp” option in cruel difficulty?
8
Why are Jewelled Foils much more preferable to Harpy Rapiers for modding?
4
In what ways can I reduce bleed's duration?