How can I give my male characters long hair?

This is my vampire character. 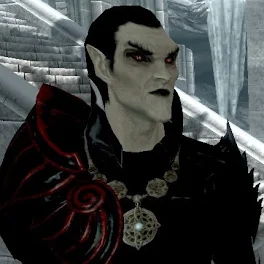 I would like for him to have long hair going down his back, like Kain from BloodOmen or Kabito Kai from Dragonball Z, but all the default hairs are short.

Is there any way I can make him male, but still give him long hair?

Are you interested in using mods to achieve the look you want?

Use ApacheSkyHair mod, and you should find a longer hairstyle you like for your character.

There are two ways you can change the appearance of your character, one which is 'official', and one which is a console hack.

If you have the Dawnguard expansion, you can go to see Galathil in The Ragged Flagon in Rifton, who will allow you to change your character's appearance for 1000 gold.

If you don't want to do this, and are OK with messing about in the console [PC only] then drop to console and then type showracemenu - you'll be able to make any changes you want. Just don't go mad with the changes [i.e. don't change race], since you can mess things up here. It's better, I feel, and safer, to go the 'official' route and consult Galathil.

4
How can I remove dragon priest masks from a follower's inventory?
3
Why is Jarl Ulfric abusing General Tullius?
5
How can I avoid being disarmed by Draugr bosses?
2
Annoying glitch that won't let me finish the "Discerning the Transmundane" quest
6
Can I cure Hert's vampirism?
3
Does my character's customization affect game play?
75
How can I stop NPCs from picking up my dropped items?
15
Can I actually turn this kid invisible?