Which game first introduced the concept of weapon recoil?

This morning while watching a video of Wolfenstein 3D from 1992 and Doom (1993) I noticed that weapons don’t need to be compensated for any recoil. Then on my trip down memory lane I watched a Half Life (1998) video and there, automatic weapons at least seemed to have some form of recoil.

There must have been something happening in between that introduced this feature into the game design of FPS, that is almost ubiquitous nowadays.

Recoil is the backward momentum of a gun when it is discharging bullets and causes players' screens to "shake". This often causes the shooter to sway away from their intended target after the first shot due to the momentum "kicking" the shooter's aim. The higher the recoil, the more the screen will vibrate.

To which I will add a picture to illustrate (CSGO recoil pattern of AK47):

This led me to wonder:

Which game introduced this concept of recoil when shooting and thus the compensation necessary to be accurate while shooting say, full auto or rapidly, in a FPS ?

The first shooter to display weapon recoil, that I have managed to find, is the Dirty Harry (1990) video game.

The game is a side-scroller in which players must guide Dirty Harry throughout San Francisco. He wears a blue suit, although it can be exchanged for a white suit. He wields his signature Smith & Wesson Model 29, and players have the ability to draw the weapon without actually firing it. The Smith & Wesson Model 29 also exhibits a recoil effect when fired.

To fulfill the FPS requirement, Time Crisis (1995) might be your best bet as it was an arcade game so the point of view is your own eyes. I know from personal experience that the arcade machine forced recoil.

Most sources tend to be relating this back to the police Fire Arms Training Simulator (FATS) training systems, like this article does, pg 15::

But if you go to the local video arcade, you’ll find an almost identical device. A game such as Time Crisis for example, in which you’ll find that the pistol, the slide slams back, it recoils in your hand, if you hit the target the target drops, if you miss the target the target shoots you. The only difference is in the FATS trainer, if you shoot the wrong target, you’ll be reprimanded, ultimately even fired.But when the kids are playing the game there is no adult supervision, there is no standard, there is no control.

Or mass murder performed by children, as this article does:

More of an RPG with FPS elements than a pure FPS, but the original System Shock from 1994 had projectile weapon recoil.

This full-sized combat rifle is based on the 2064 Interlocutor KR-5. It's not quite as powerful as it sounds, and it produces a big recoil and thus has a longer recovery time than the other weapons. Still, it's handy to have around, and can dispatch most enemies with a couple of shots. Penetrator ammo is very scarce, but highly effective.

According to Phoenix: The Rise & Fall of Video Games, 3rd edition :

Konix developed other controllers for the system. One was a light gun that had attachments to turn it into a light rifle. It even had a recoil when it fired to make it realistic.

According to wikipedia, the system with recoil was first demonstrated in February 1989 at Earls Court Exhibition Center in London.

(but this was physical recoil, not animated recoil)

In the March 1984 issue of Crash: Micro Games Action, page 25, the game "The Pyramid" is reviewed and the review says:

there is even a recoil effect on the laser 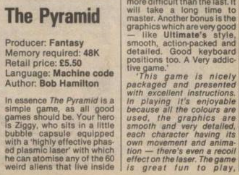 (also if you consider military simulators, already by World War II there were recoil simulators for automatic weapon training)

Quite frankly, I think you answered your own question by posting CS:GO's AK spray pattern. Counter strike 1.6 was released in 2000 and was a mod for half-life even before it's 2000 release. Most certainly the first game to implement a mechanic for compensating recoil(not recoil itself, but compensating for it) that was an absolute must know for playing. There may be other earlier games using some form of recoil before Wolf 3D, unfortunately, I don't know them.

As for Wolfenstein and Doom, both engines used auto aim, as the keyboard isn't that accurate for aiming. The chaingun from Doom had some kind of spray pattern when fired, as such, it was better to tap fire a maximum of 2 bullets to keep the aim straight on far away targets. Firing any more than 2 would offset the bullets in a increasingly more inaccurate spray. Super good at close range, not so on far away targets. In a sense, even Doom had a primitive form of recoil.

Most FPS game engines from the 90s where fairly arcade in essence and not simulating actual recoil. We are talking : Id Tech 1(doom),Build Engine(Duke Nukem),Unreal Engine(Unreal Tournament), Id Tech 2(Quake2), Id Tech 3(Quake 3). Any other engine with better recoil mechanics are basically forks of these. Even Half-life's engine is a heavily modified version of the Quake 1 engine.

So as far as I know, the omnipresent mechanic we know today without going too far away in the past is taken from games like Counter Strike, Call of Duty and Rainbow Six.

Not the answer you're looking for? Browse other questions tagged first-person-shooter gaming-history .