Ask Question
Asked 5 months ago
Active 5 months ago
Viewed 81 times
0
Closed. This question needs details or clarity. It is not currently accepting answers.

I moved Skyrim from Steam to Origin. There is another person using that Steam account and they play the same game on it. I want to download a mod for Skyrim but I don't want to risk messing up their game so I want to get the mod on only the Origin version of the game. I still have the Steam version and the saves are shared between the Origin and Steam versions of the game.

How can I install a mod for Skyrim only on Origin but not on Steam?

TL;DR: Origin won't let you do this by itself. Consider a mod organizer (which you can still run through Origin if you really like Origin that much).

There are some fundamental misunderstandings we need to clear up before we can answer the question. Adding a "non-platform game" to a platform does not make a seperate instance of the game, it simply creates a shortcut. In OP's case, the Skyrim install Origin is pointing to is the Steam install. There's no difference. Now we can move on to mods.

Generally speaking, there are two kinds of mods for Skyrim: mods that overwrite game files, and mods that don't. The most down and dirty way to mod a game is to do the former, simply replacing a Bethesda-made asset with a identically named file. Mods like this fundamentally alter the install, because the original file is gone. Other mods use .esp files to modifiy the game. .esp files are added to the load order and are run when the game starts, and can be toggled off to return the game to its default state. In my experience, most popular mods are of the second type, but there are exceptions. Additionally, there are mods that add to or change Skyrim's animations, which require the user to run a separate tool, usually FNIS, to work properly. At least in the case of FNIS, the tool must be run whenever a change is made, even when disabling or uninstalling animation mods. In OP's case, since mods work the way they do, and Origin is just using the Steam install, there's no built-in way to automatically turn on mods when Skyrim is launched via Origin. We need another piece of software.

For anyone doing any amount of modding to Skyrim, I cannot recommend getting a mod organizer (such as MO2 on Nexus) strongly enough. This especially applies in OP's case, as OP can use the mod manager to run Skyrim with a modded load order, while the other person can just launch from Steam using the default load order. Mod organizers streamline the downloading and installation of mods, allow easy management of the load order, and can let the user know when a mod is out of date or trying to overwrite files. You can even add shortcuts to vital tools like TES5Edit, LOOT or FNIS, so everything is in one place. Some even allow the creation of profiles, allowing the user to switch between present selections of mods in a dropdown bar. Mod organizers are standalone pieces of software and as such can be run straight from the desktop, but can also be added to platforms such as Steam or Origin if the user prefers.

Like Dallium said, you seem to be using the exact same Skyrim game, but just start the game through another 'shortcut'. You are going to need a mod organizer, and I suggest the appropriately named Mod Organizer (2).

Install it, and create a shortcut on the desktop. This will be the shortcut through which you both can start Skyrim (note that in order to play it you need to be logged into the Steam account the game is registered to).

In Mod Organizer 2 you can set up profiles:

These profiles will save activated and deactivated mods, custom .ini settings, and can also enable you to have separate saved games: 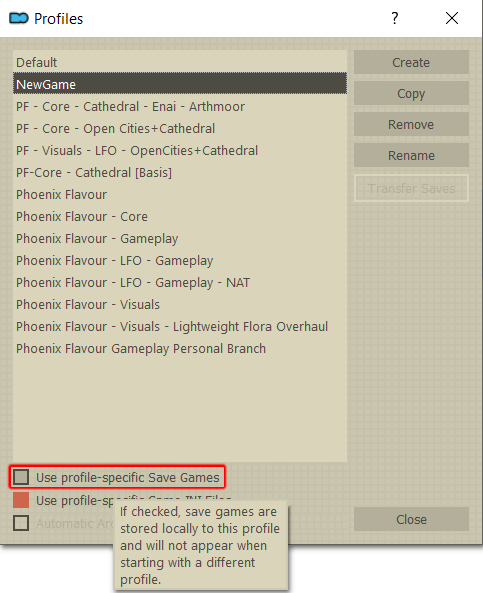 Using this, you can setup two profiles within MO2: one with mods for yourself, and one without mods (or, rather, without any activated) for the other person.

You can easily switch between those profiles before starting the game through the in-application shortcut.

Note that some mods require changes outside the \Skyrim\Data\ folder, which MO2 will be unable to manage (e.g. graphical enhancements like ENB), so I suggest steering clear of those mods unless you want to make it harder for yourself (harder meaning you might have to switch the contents of the \Skyrim\ folder, for example).

18
How do I find out what version my Skyrim is patched to?
2
'Skyrim HD - 2K Textures' mod installed via NMM not showing up in the game launcher
12
Nexus Mod Manager says "Unable to get write permissions for: C:\Games\Nexus Mod Manager\Skyrim\Install Info
3
How do I punch faster?
4
Does Steam save on discs?
5
Steam Skyrim different languages on the same computer
4
I have bought Skyrim on CD, yet Steam is saying I have to buy it
8
Do Skyrim mods work with the Special Edition?