How to protect aircraft carrier especially against submarines?

TIP: Guard Carriers with a handful of fast-moving ships and a battleship, as losing a fully-equipped Carrier is VERY painful and expensive.

I usually deploy a loaded aircraft carrier with 4 accompanying battleships, one of which is always on the same tile as the carrier to protect it from direct attack. This gives good defense against enemy ship attacks because:

Unfortunately, the aircraft carrier is still vulnerable to these enemy attacks:

How would you recommend better defending aircraft carriers from stealth submarine and air attacks? Other than battleships, what other accompanying units should I consider? 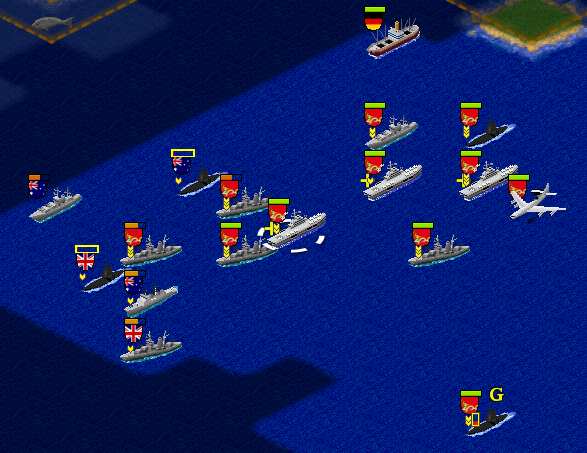 Usually, the strategy with fast-moving ships (i.e., destroyers) is to have a few "sweep" the area each turn for submarines, since they can move more tiles than the carrier. This only works perfectly if you have enough to see every tile, but you can at least give yourself much better odds even if you can only see most of the tiles with the destroyer group.

This is one of the areas Civ is pretty realistic - a proper convoy protects you pretty well from submarines, just like they did in real life.

As far as cruise missiles, they're a bit harder to deal with of course - you can put up a 'screen' of destroyers, making it harder for them to get around you, but that's going to cost you a lot of ships. AEGIS cruisers are better for that, as they get 5x defense against missiles.

I usually won't use many battleships if my opponent goes the submarine/cruise missile route - too easy to lose them. Stick with destroyers and cruisers. Get sea dominance before you send your carriers out, and you'll have an easier time of it.

Not the answer you're looking for? Browse other questions tagged freeciv or ask your own question.

9
Freeciv: attack strategy against computer that already has railroad and cannons
1
How to cancel trade routes in Freeciv?
1
Android Freeciv, how to load unit onto ships?