I've started playing Fallout 4 on PC again after a few months away. As I've been fighting, I've noticed that the dead NPCs I kill will despawn/disappear immediately when the battle ends, with the exception of whoever I kill last.

For example, I just picked up a radiant quest to defend Nordhagen beach. Three raiders wearing power armor spawned and I killed all three. (They were just normal raiders, no Legendaries.) After the fight, the quest marked itself complete successfully. I was standing over the body of the last raider, and could loot him. The other two were gone.

This has caused me to have to change my usual strategy to loot bodies as I kill them, which I find very annoying. (Additionally it sometimes causes me to lose out on possibly good loot when fighting high level enemies since I can't just stop and loot while taking fire.)

While I don't play with external mods, I do have a bunch of the "Creation Club" extras which I added between my last time playing and now. These are:

Of these, the most likely culprit is Gunners v Minutemen since it's a gameplay extra. The Backpack is just an extra item, and the Virtual World extra is just a settlement enhancement. I've looked around, but I can't figure out how to disable the GvM extra to see if it's what's causing the problem. The page in Creation Club just shows "Installed", and the available options are just "Download" (does nothing/disabled) and "Purchase Credits". 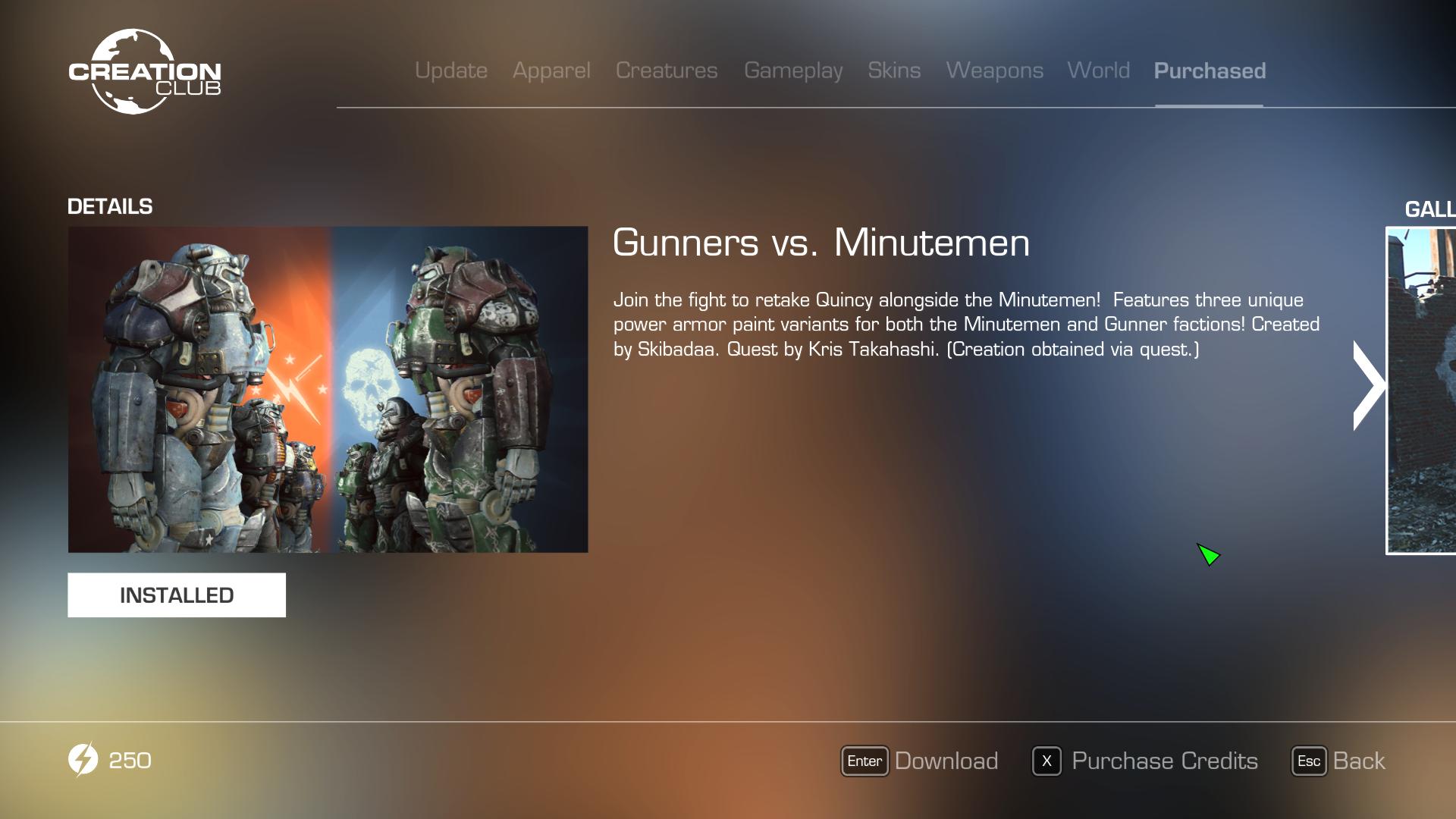 Is it possible to disable this Creation Club item somehow so that I can figure out if it's the cause of the buggy disappearing bodies? I found some Reddit threads which talked about uninstalling the game, verifying the cache, and then reinstalling it and making sure not to download the particular CC items in question. (I'd like to avoid going this route because my internet connection is pretty flaky so downloading massive files is problematic.)

I did take a peek at LOOT but I wasn't able to identify any of the *.esl as being this particular mod. LOOT didn't show any problems, however.

Basically my goal is just to disable this CC item to see if that fixes the issue. If not, I'll re-enable it and try troubleshooting something else.

You can delete all the paid mods from your data folder.They all start with the same prefix, i'm not sure if it's the same filename for everyone but i deleted all the files beginning with 'ccBGSFO4001' in my data folder. For example 'ccBGSFO4001-PipBoy(Black) - Main.ba2' They're really easy to spot and delete as they're not named like the core files.I've got the game blocked on my firewall, and everything runs fine without the files. – webcache.googleusercontent.com

That site kept trying to redirect me to a DL. Do not download from that site. You probably shouldn't even click the link.

7
Preston stops following me after retaking the castle
11
What was supposed to happen at the Battle of Bunker Hill?
2
How do I complete the Taking Independence quest?
4
Are named raiders of any importance compared to normal ones?
14
Can I Find X-01 Parts in Fallout 4?
2
In Fallout 4, can a trash mob drop a critical item?
3
Fallout 4 mod load order
0
Fallout 4 Xbox one "pinned" quest bug
16
Can I complete Home Sweet Home without enraging the Minute Men?
5
Where's Codsworth?