Why is Shadow being referred to as a woman?

While Final Fantasy 6 is really amazing, it does suffer from certain translation issues (you can supply your own examples). Most of these can be ignored or glossed over with a simple "Oh, I see what they were trying to say there."

This one, I couldn't easily dismiss or explain away; it does not seem to be a mistake as it is repeated.

Shadow is rather shrouded, so you don't really get a good look at his face. And of course, Gogo is also "shrouded in odd clothing" and you're never really sure if this is a man or a woman ("... or should we ask?"). But with Shadow, for the entire game up to this point, it was just assumed he is a dude.

Was that a false assumption? This is so weird. What am I supposed to do with this? 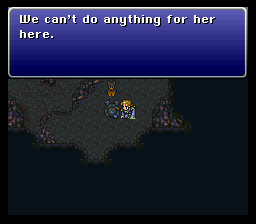 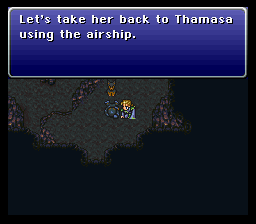 (This appears at the end of the Cave on the Veldt, in the SNES version. What does the GBA version show here?)

According to this GameFaqs post, this was due to a programming error in the original SNES version.

As a result of events prior in the story, the individual you find wounded in the cave is either Shadow (male) or Relm (female). The error incorrectly displays the text as "her" even if Shadow is the one that is found. This was corrected in the PSX release.

First off, the SNES and PSX versions are almost exactly the same, except that in the PSX version, the Sketch bug was fixed (as opposed to only some SNES versions), there were a few MINOR dialog changes (most notable that the "Let's take her back to Thamasa" line was corrected, so it matches the proper gender of the charcter being referred to (female if Relm, male if Shadow)).

This is confirmed on the IGN's game script

Look at those wounds...

Enemy's coming from behind! Another monster appeared!

We can't do anything for him here. Let's take him back to Thamasa using the airship.

As for the GBA release, the dialog in this scene seems to have been changed entirely and, in turn, removed the gender specific text, as shown in the GameFaq's game script

[The party enters into the cave and Interceptor comes toward them.]

Are you trying to tell me to follow you?

These wounds are awful...

[The party enters into a battle with a monster.]

Something's coming from behind!

We can't do anything for wounds like these here... Let's fly back to Thamasa on the double.

Not the answer you're looking for? Browse other questions tagged final-fantasy-6 or ask your own question.

6
Why should I keep my characters at low levels in Final Fantasy VI?