What does this symbol mean in Fallout 4?

I've come across this symbol a few times in Fallout 4. It's reminiscent of the shadow marks in Skyrim, so I assume there's an actual meaning behind the symbol, but I can't figure it out. Does anyone know what it means? Also, is there anything in the game that identifies and explains this and/or other symbols, like the shadowmarks book in Skyrim?

I attempted to attach an image of the symbol, but the app wouldn't let me attach it, so I'll describe the symbol instead: It's a sort of an asterisk pattern of 6 lines radiating from a central point, but none of the lines actually touch; instead, there's an x in the center of the symbol.

You are probably referring to this symbol. 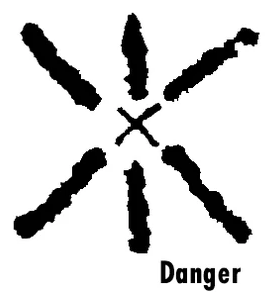 This is one of the railsigns which means "A danger is present nearby".