How can I unlock museum donations as a non-very first relocator?

I can’t get the flimsy axe DIY recipe. I don’t have a prompt to show Tom Nook that, "I found a creature!"

I’m guessing this is because someone else on the island has the titles of:

How can I unlock museum donations as a non-very first relocator? (and unlock the flimsy axe DIY recipe?)

Not sure what the downvotes are about; Game Revolution has an article entitled Animal Crossing: New Horizons’ multiplayer has some major downsides which backs up what you said:

There are some major downsides to Animal Crossing: New Horizons multiplayer gameplay, with players complaining that Player 2 is unable to actually “share” the island in the way they were hoping to. As a result, those sharing an island with another player — the only way to experience Animal Crossing: New Horizons with two or more players using the same Switch — could be left very disappointed.

The article goes on to say:

The first person to create the island is more or less considered “in charge.” That means that Player 2 (or anyone else who isn’t the main player) has some major restrictions for Animal Crossing: New Horizons multiplayer. Other players can’t build buildings or really do anything that advances the story, instead tagging along on Player 1’s adventure. Additionally, the game’s resources aren’t duplicated if another player chooses to play separately on the same Switch. This means that if one player has chopped a bunch of wood or picked up some fruit in the morning, a player hopping on in the afternoon will be left without any resources to gather.

The museum seems to be something that does advance the story and at the moment if you are non-very first relocator it seems like it is off-limits to you.

Also: on day 2 you can start to buy the flimsy axe recipe from Timmy; just work co-op for museum donations for now.

Secondary players will need to wait until the general store (Nook's Cranny) is ready.

This is Timmy/Tommy's first upgrade, requiring the main player to use the axe/shovel to get 30 stacks of different kinds of wood/ore.

In the store, you can purchase either the flimsy tools outright (for bells) or their DIY recipes. 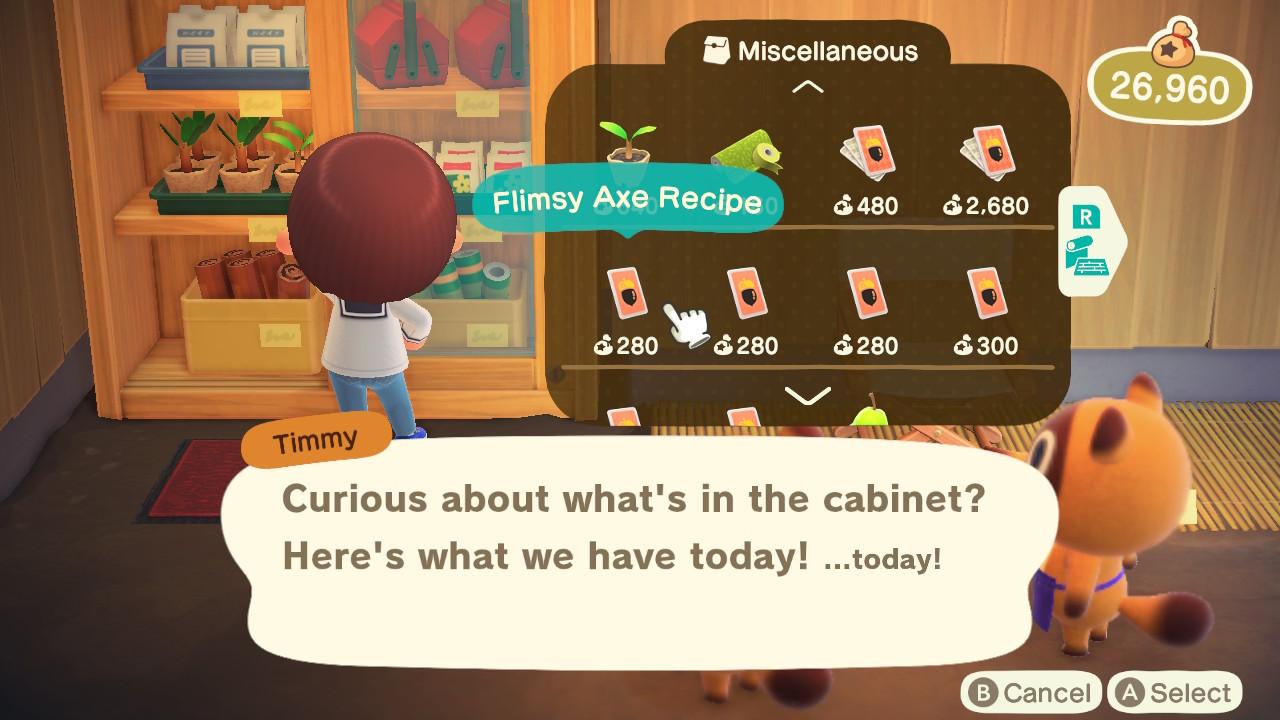 (I tested this by loading a secondary user on my island, which saw the same selection as shown above.)

i feel most of these arent specific about who the second player is. OP, you have to be the very first person on your island, you can donate by going and logging in as the main player, the first person on the island (the one who first opened the game)

Not the answer you're looking for? Browse other questions tagged animal-crossing-new-horizons or ask your own question.

4
How can I get this balloon present?
3
How can I get a shovel?
3
How can I maximize my turnip investment? Does it have price patterns?
2
How do I unlock reactions?
1
How can I obtain more Nintendo Switches?
4
How can I register songs to my stereo?
5
Is there an upper limit of how much money you can throw in a gold hole?
2
How can I get rid of extra fruit or food energy?
2
How can I tell Real Art from Fake Art from Jolly Redd?