How to get over this one little last bit of acceptance lack to actually use diplomacy for anything?

I've had this situation so often (in every game version since 1.6 - I think), trying to make use of diplomacy for anything but no matter how much energy and time I spend into improving relations, I can never get over this little 1-20 negative acceptance level that is left after exhausting all options. So usually I just declare war on everyone to get what I want and it works, while I get the feeling diplomacy never does and the game picks the negative values exactly so that you cannot achieve anything with it.

Currently I'm trying to get the opposites attract achievement that says "Have all eight ethics represented within your Federation". I picked the most likeable Ethics, so I'm fanatic xenophile and pacifist. I'm pretty much on positive terms with everyone close to me (like half the galaxy) and everyone else neutral, except for one Fanatical Purifier on the other side of the galaxy that is almost destroyed by another empire (only two systems left) and two smaller empires that were rivaling me together and then lost two offensive wars against me, during which I pumped up my military power and took enough of their empires for them to never consider that again. So now I'm the biggest empire and there are only two left being considered as equivalent (one has inferior fleet and economic power, equivalent tech; the other has superior fleet power, inferior economic power and equivalent tech). Now I want to get to the actual achievement and wanted to start with the empire next to me that is also a plant species and we were friendly from the beginning of the game and they would add egalitarian and materialist to the conditions. However, I only ever got to -11 acceptance to form a federation due to me not allowing offensive wars; I would like to stay pacifist though, so I tried everything to increase the relation and get over the ridiculous -50 and this is where I'm at.

I've tried to increase our relation with envoys, threw a huge portion of my resources in their face, used all Diplomacy traditions and picked the defender of the galaxy ascension perk to increase opinion (in hope that would change the "opinion" listed in the acceptance flyout and not just the one listed in "their opinion of us" but alas, it was the latter), we have a defensive and commercial pact, a research agreement and migration treaty, their trust maxed out at 150. Little of these actually changed anything in the acceptance. Friendly attitude (which seems to be the best possible) gives 30 and opinion (solely due to the "excellent relation" level it seems) gives 45 and another 6 from relative empire power. We had a mutual rival, which seemed to have added another 10 but that one dropped out, the Pelisimus now don't have any rival anymore. I find it very incomprehensible as to what actions only increase the opinion regarding the relation and what increases the acceptance (which almost nothing does). Now I do not know what to do anymore, as I've seemed to have exhausted all my options. I tried to increase my empire power but I only got from 4 to 6 after way too much effort so I fear this won't ever get me anywhere, either. Their diplomacy stance is cooperative and they're neither militarist nor authoritarion so I don't know why offensive wars is such a big deal for them to blow everything (I've read it's -30 for someone else with the same problem, which is the main reason I feel the game picks the values so you just CANNOT use diplomacy for anything except for ridiculously small things)

So this is my empire (Lilarobius Republic) to the right and theirs in the middle: 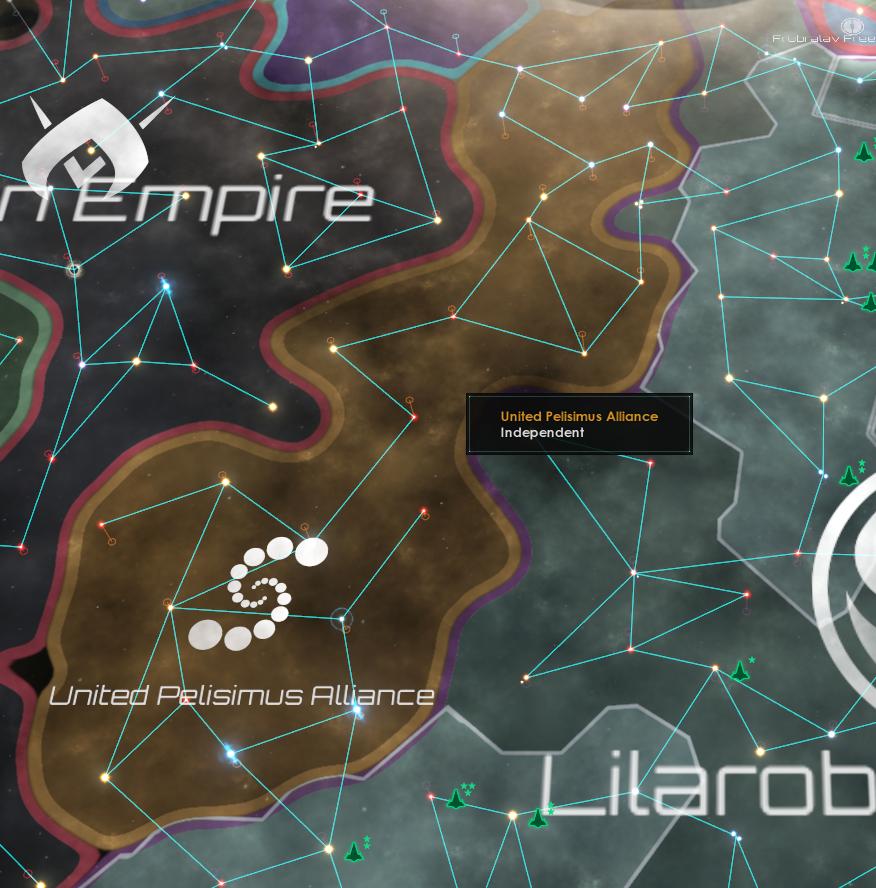 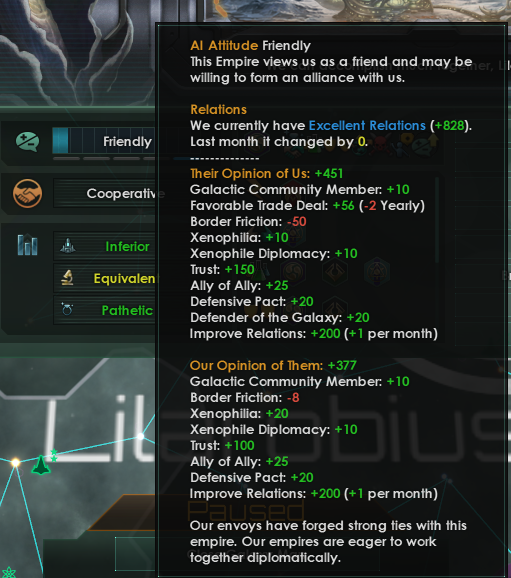 In the same gameplay, both of my former attackers got a rebelling planet declaring independency and I tried to vassalize both but was only able to do so with one that's only one system away (and even there I was surprised that actually worked). For the other I can only offer Protectorate status (which would still be fine) but the acceptance is -6. Again I did everything to improve their opinion but again nothing was enough. Their single system is only four systems apart from my empire but this distance already throws in a crushing -74 acceptance, which is absolutely ridiculous. I can form a federation with them but they have the same ethics than me which wouldn't be of use, which is why I want to bring them otherwise under my control.

Their single-system empire with me at the bottom left: 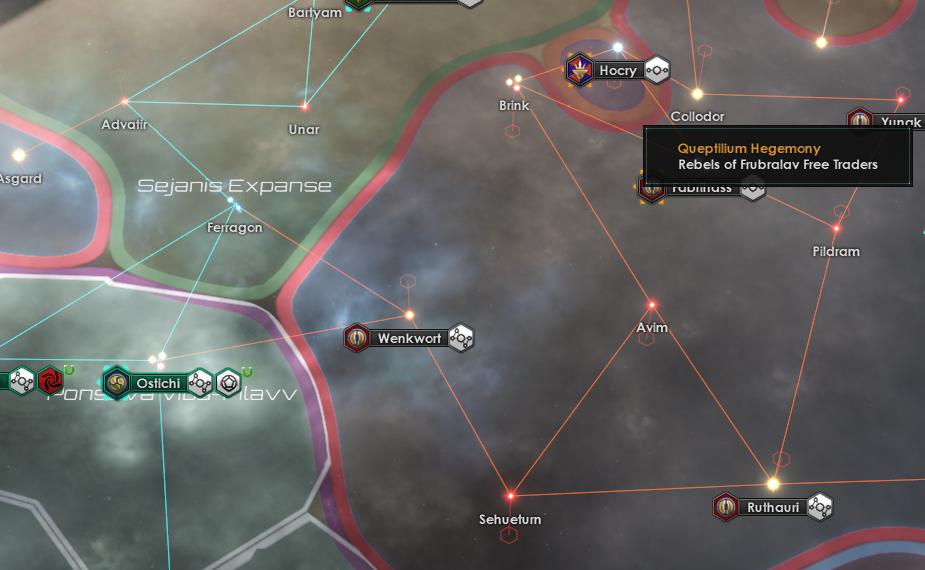 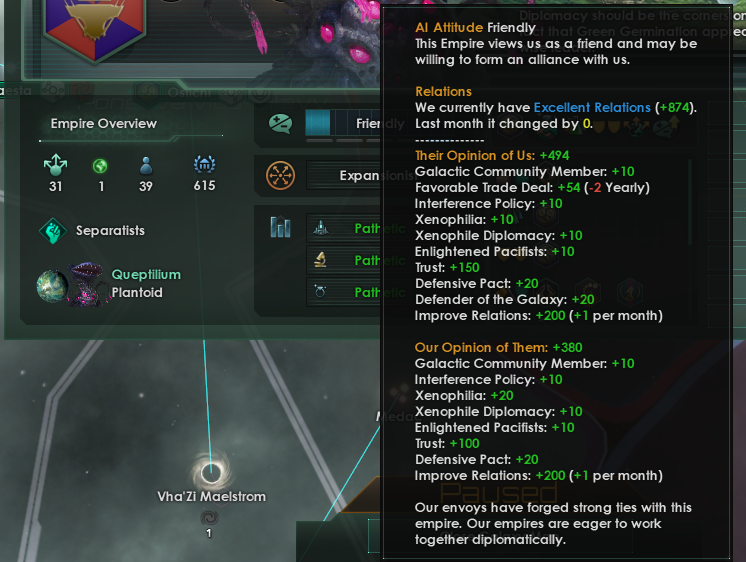 And their damned acceptance:

So, why is diplomacy so damn useless? I think the game is absolutely unbalanced in favor of wars. What actions do actually influence the acceptance in 2.6? And is there anything I can do besides trying to shift my ethics towards militaristic to get rid of the pacifist ethic and allow offensive wars? I feel the only way to actually get this achievement is to be lucky enough to get an awakened empire in your galaxy and forming the league of non-aligned powers being even more lucky catching all the ethics, though I wouldn't know how to form this federation as your own and not just joining them when another empire asks as I fear in the latter case you won't get the achievement.

Well it seems you've answered your own question - in this case you won't be able to form a federation with the "No offensive wars" policy. The fact that everyone likes you because you are a pacifist doesn't mean that everyone wants to be one and not being able to fight offensively. Try switching it to "Liberation Wars" instead (which you can do if you are not a fanatical pacifist).

Diplomacy is not "so damn useless" but you can't expect that everyone will be willing to follow you. Please look at the list of modifiers of Opinion in the Stellaris Wiki and hope for some big events like War in Heaven to show and then pick the same side as your allies.

Also, this might not work in 2.6, but it seems that even asking to join the federation (even if they'll refuse) can change the opinion positively - at least that conclusion one could take from the note on Diplomacy

8
How can I make other empires like me enough to join an alliance?
7
What does the ethics divergence value actually mean?
4
Gifting in Stellaris to increase opinion
5
Is it possible to somehow remove a state from an alliance?
9
How exactly does ethics divergence work?
6
How does government ethos change work in Stellaris?
1
How can I get get a fellow federation member to convert their tributary into a member of our federation in Stellaris?
2
Why and how often do AI Empires change their names?
6
How should our glorious civilization incorporate two neighboring fallen empires?
3
Subjugation casus beli