I'm wanting to make a sort of piston feed tape chamber, a 12x12x12 cube of blocks, that slowly gets fed into a piston feed tape. So the blocks would look something like this: 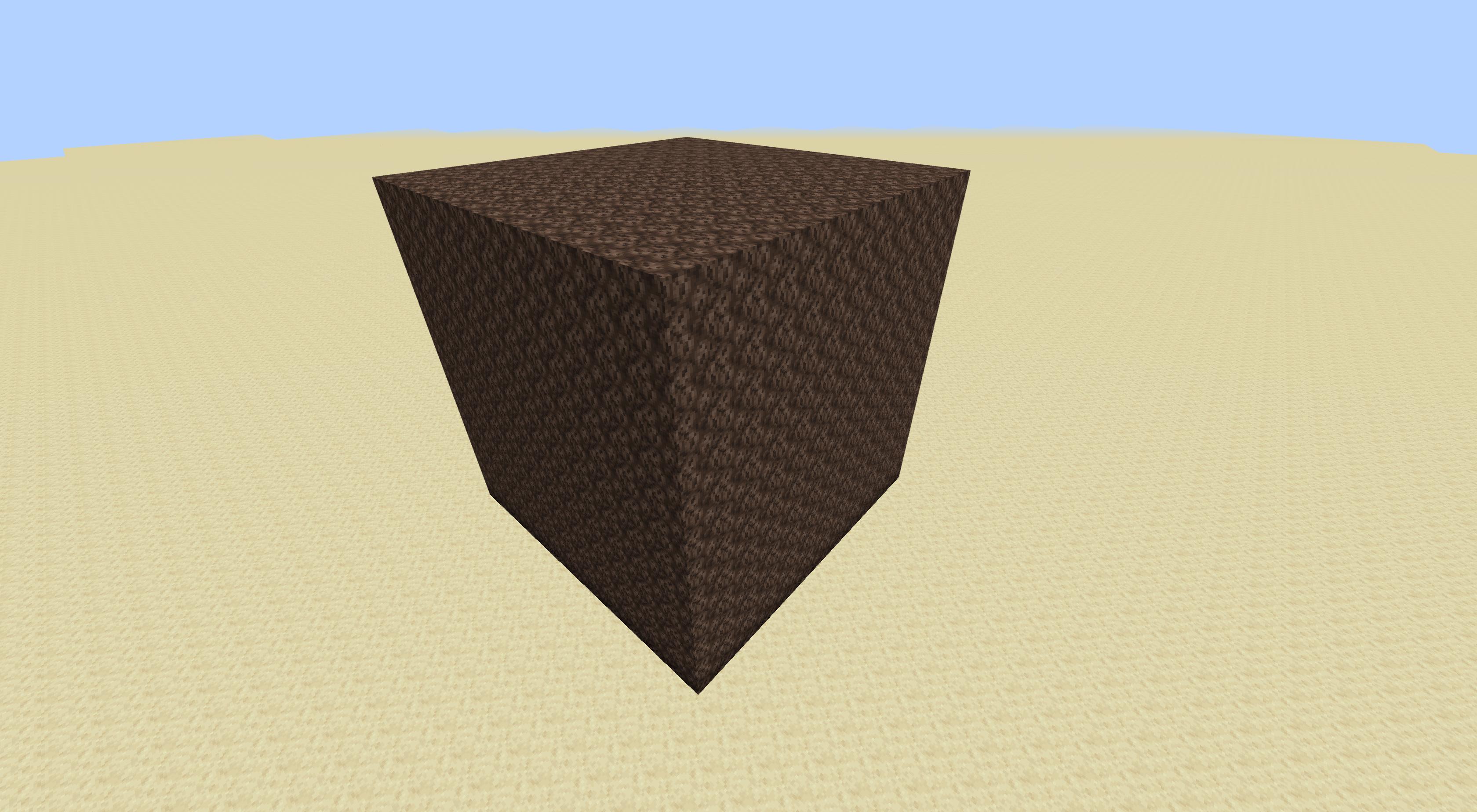 And I'd like to pick out one block at a time, to move into a feed tape. The idea behind this is this will feed into my nether star farm, without requiring an AFK player to place soul sand.

I've tried various things, but not got anything really close, or worth sharing. I thought about using pistons on top to push down, and then fill up the spaces with a cobblegen, but the problem was I couldn't get it to work without the cobble coming through before all the soul sand.

Does anybody have any ideas how I can do something like this?

I don't have a good solution for the cube. I believe the best you can do is a quarry-like contraption where you extract strips of the cache block using flying machines, then reshape them into movable lines, align with input of your feed tape and push them into it. It's a complex slimestone contraption and I'm not good at these.

What I have, is a 4-tileable vertically 2D cache. 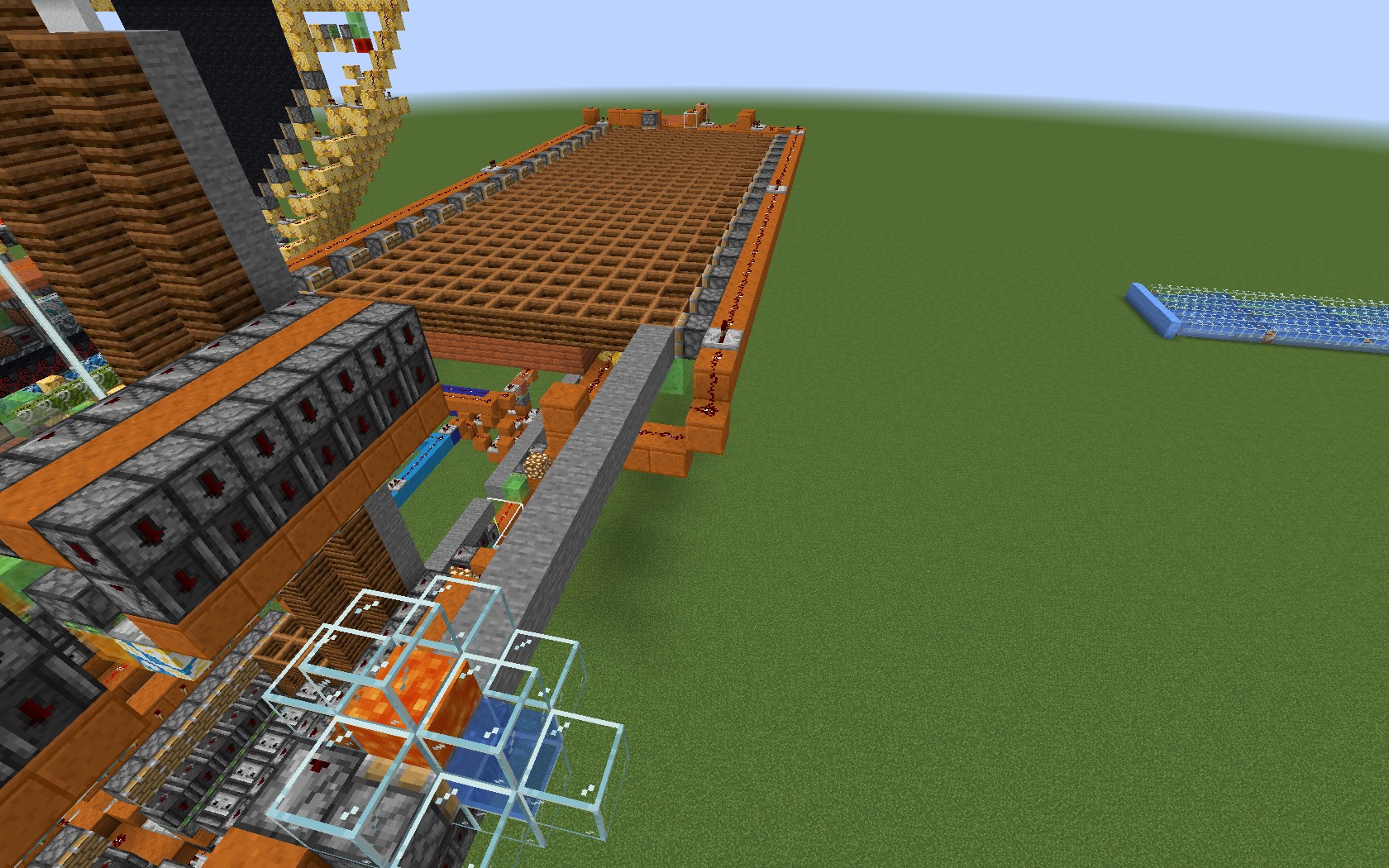 The composters in my cache are displaced gradually by a line of smooth stone. The stone generator attempts to push wherever there's room; it's already at its 12-block push limit so it can't destroy the pattern in the cache. 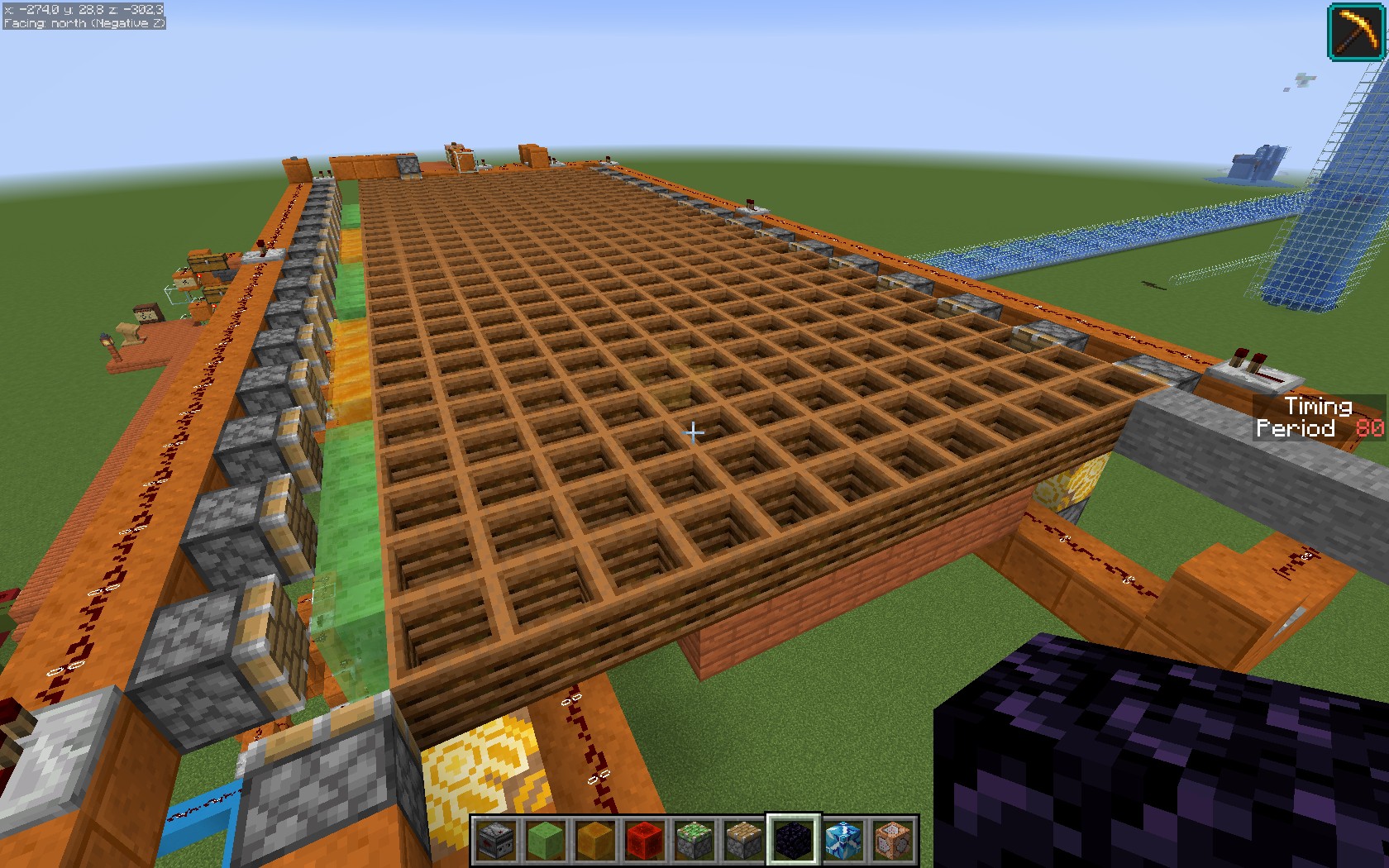 The composters form a 11-wide floor of arbitrary length. The jagged pattern on one side is not necessary - but without it some cycles of operation the cache just won't feed a block, filling a gap in the pattern instead. 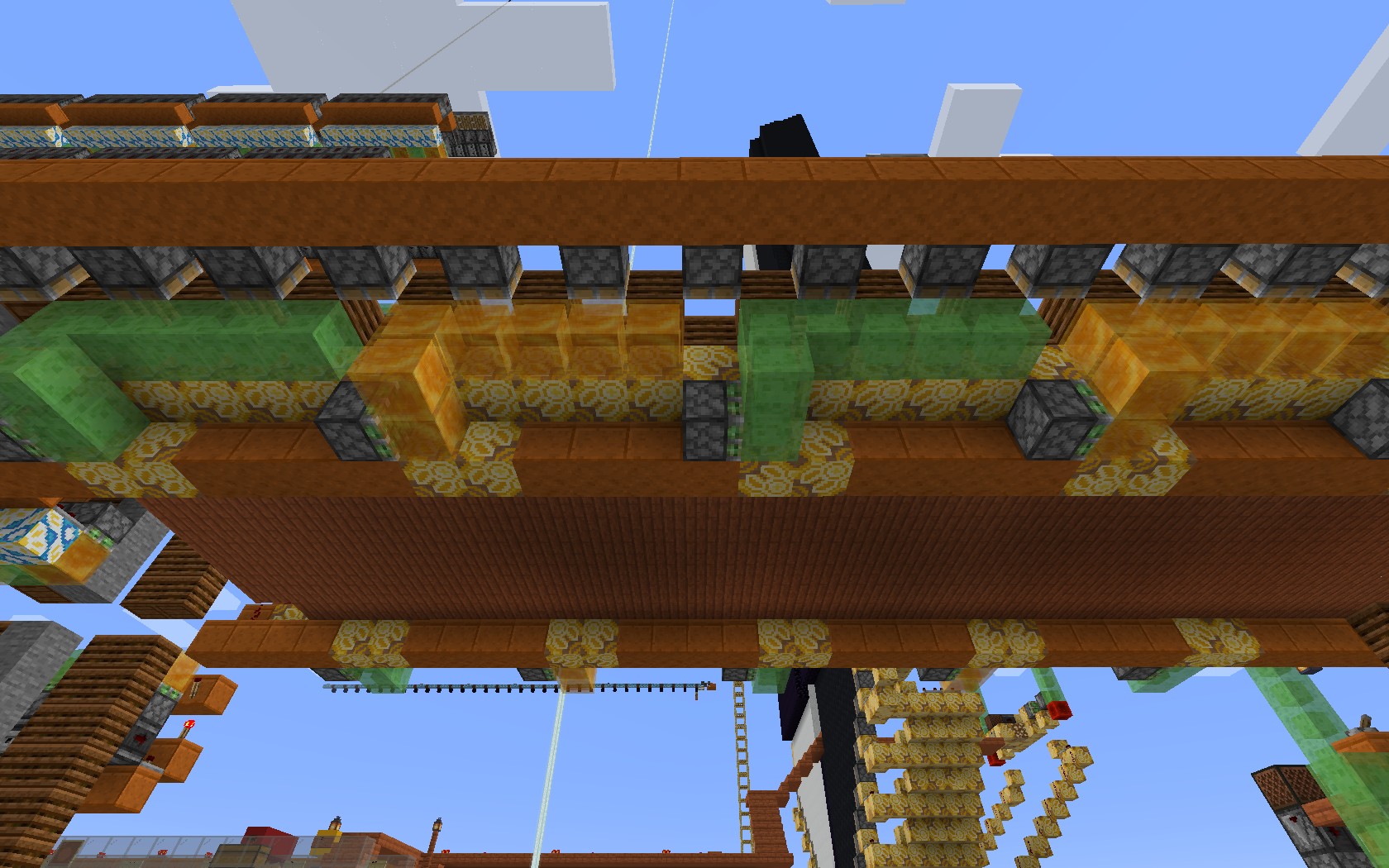 The side pistons are alternating every other block per side. Underneath the space in front of them there are slime/honey sideway pushers. The operation is as follows:

Thus the composter travel in a packed S-pattern. At the end of the line they are pushed out from the line vertically: 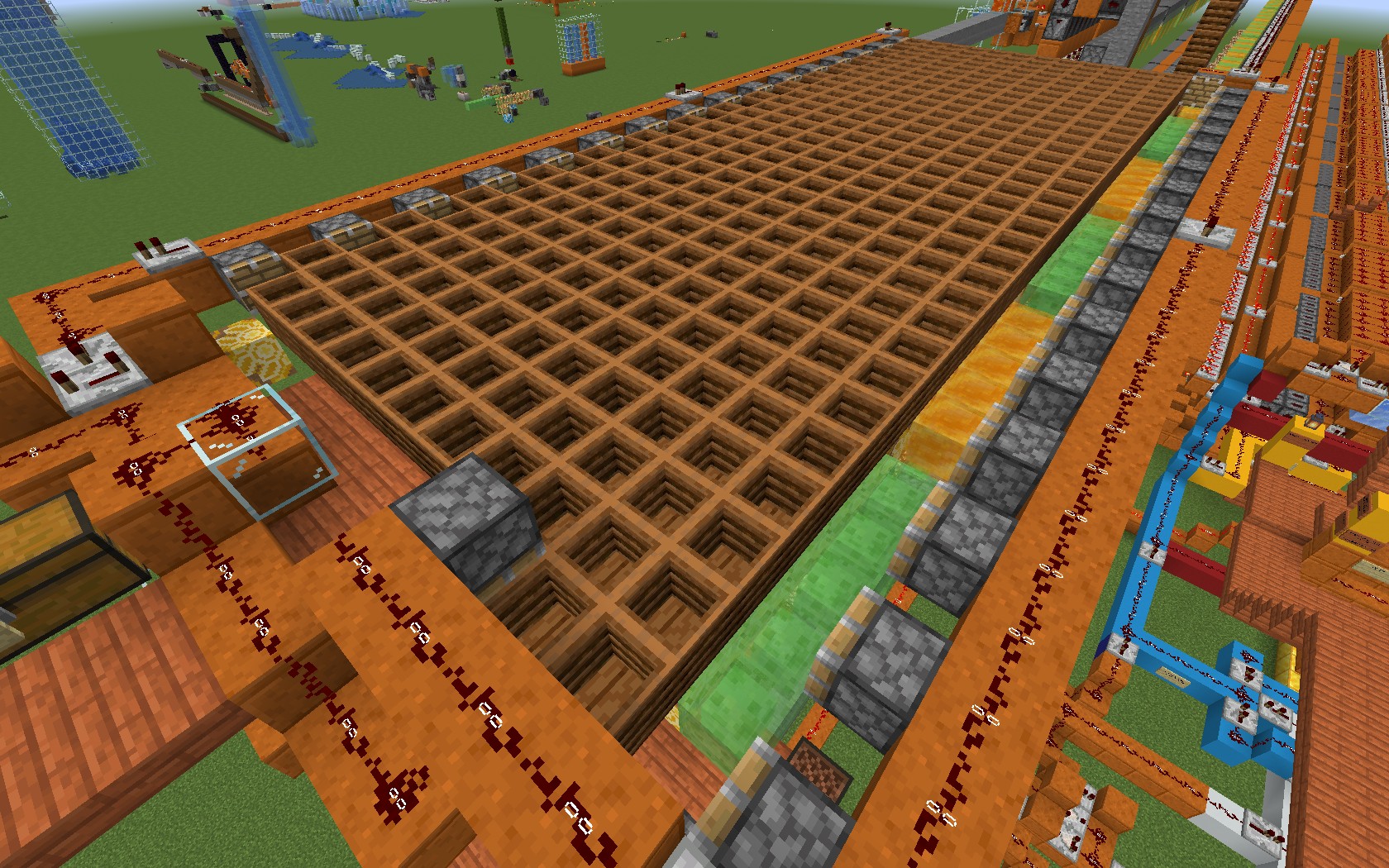 I do not have a full solution, but I have a concept that should work: 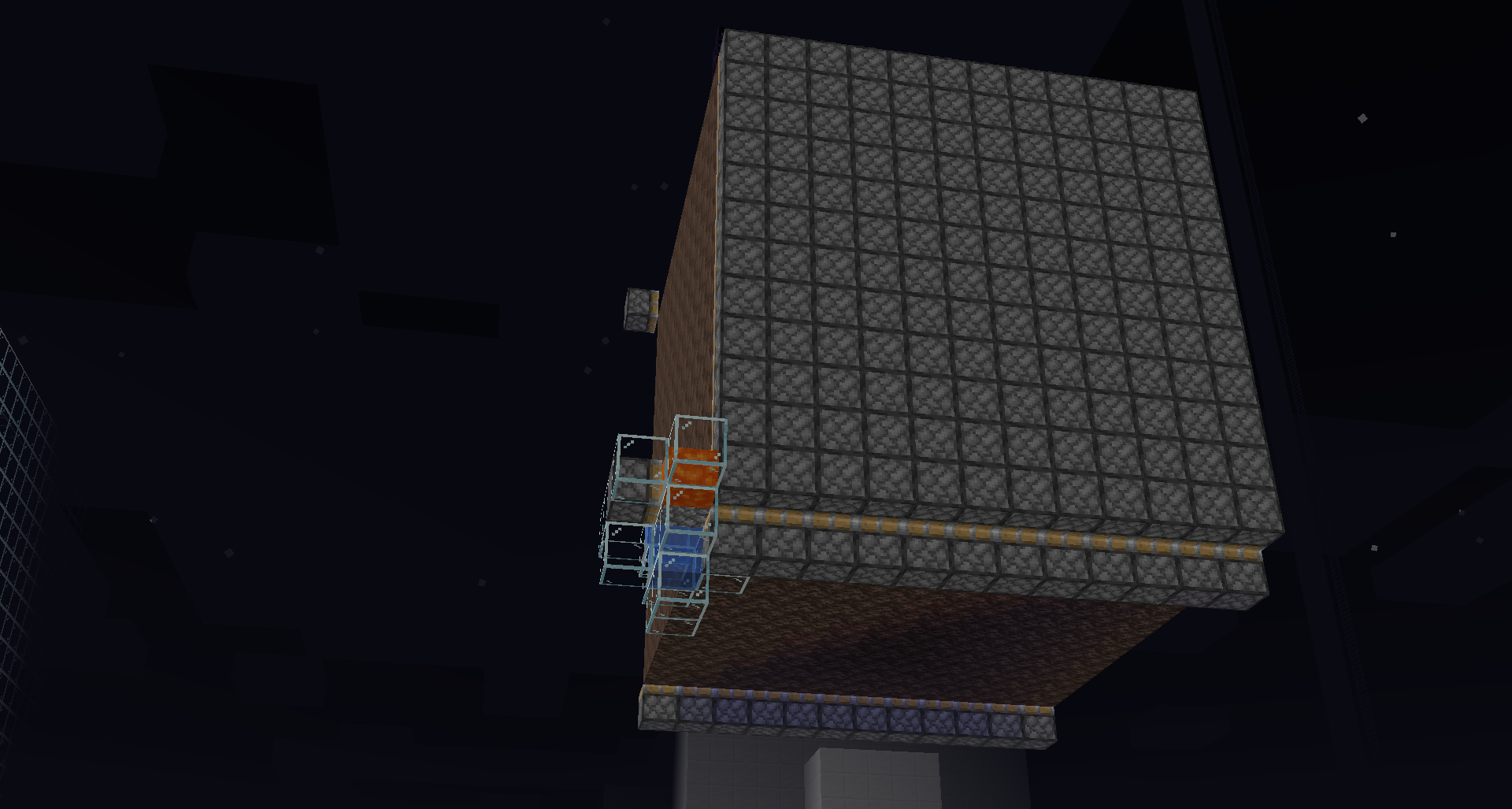 This is essentially just a regular cube builder. The cobblestone farm pushes into a row, which gets pushed up to make a wall, which gets pushed sideways to make a cube. I would just recommend to use counters here, to push exactly the right amount of times and exactly with the right timings, unlike normal cube builders, in which you usually power all pistons every time.

Part 2: Pushing the last wall up once and the last row sideways once 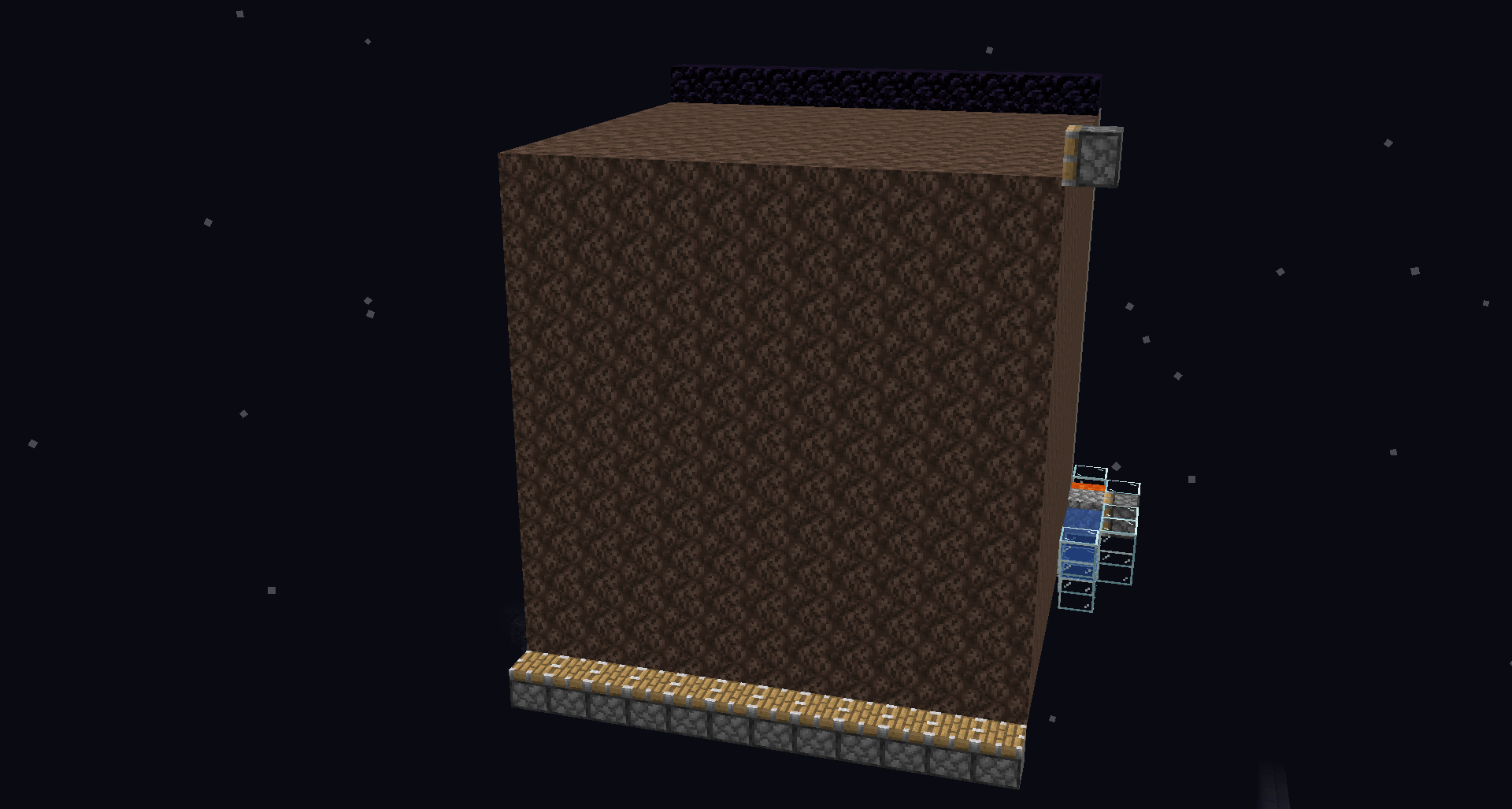 This is also pretty easy, just use a row of pistons again to push the last wall upwards and a single piston to push the top row sideways, into whatever area you want to use the soul sand in. But this only works once per wall and row. To fix that, here is …

Part 3: Filling up the last row with sand 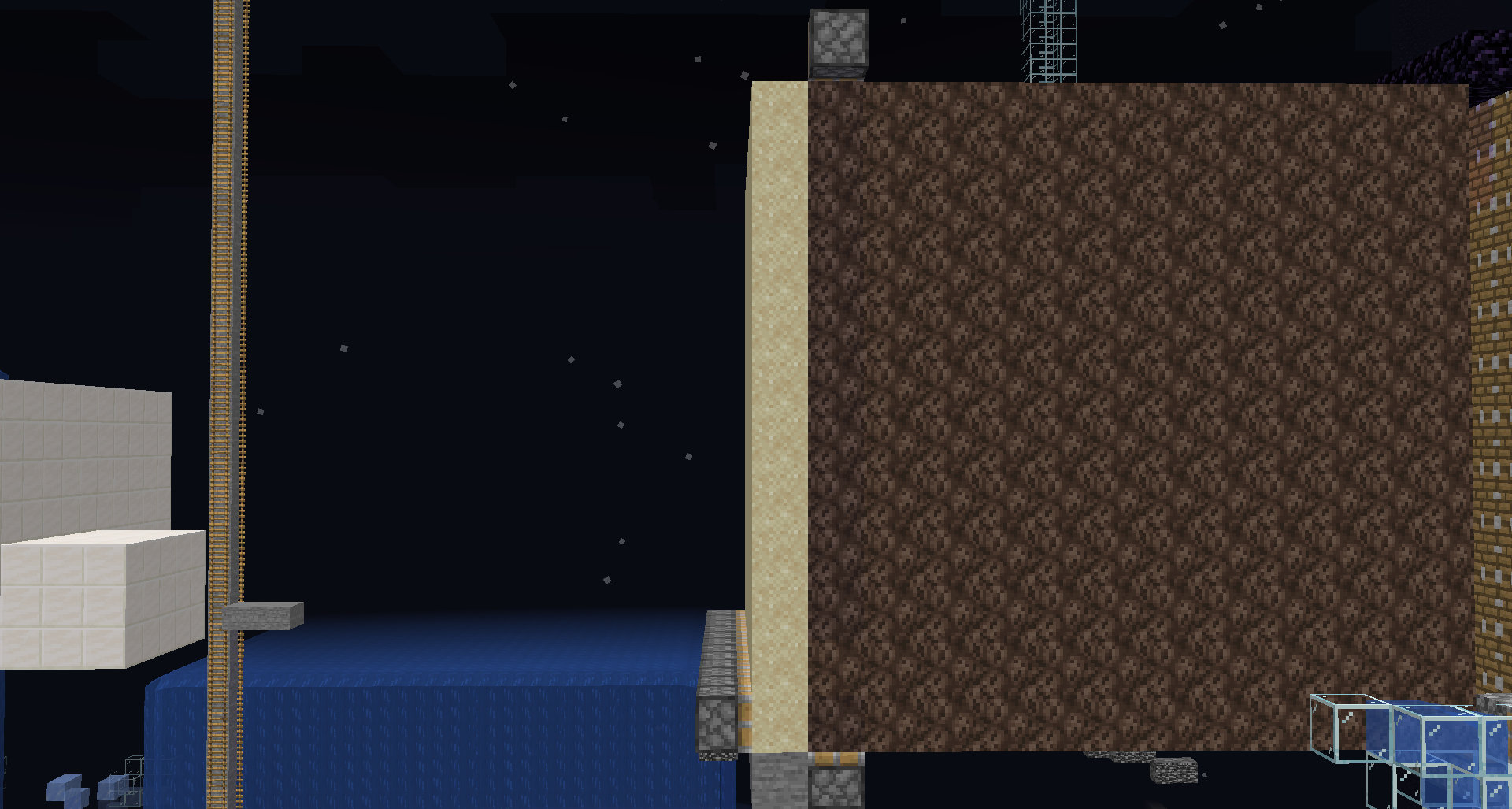 To push the rest of the last wall upwards, the only (potentially working) idea I had was to temporarily insert an additional row of sand whenever you push the wall of soul sand upwards. The sand wall falls down on its own while you replace the soul sand wall with it row by row. Once you're done clearing the wall of soul sand and generating a new wall out of cobblestone, you can simply push the cube over as usual and all the sand will return to its old position.

Part 4: Pushing the rest of the last row

The sand method does not work here. So what seems like it would be easier actually isn't really. The only idea I had that does not involve a flying machine is pistons pushing pistons: 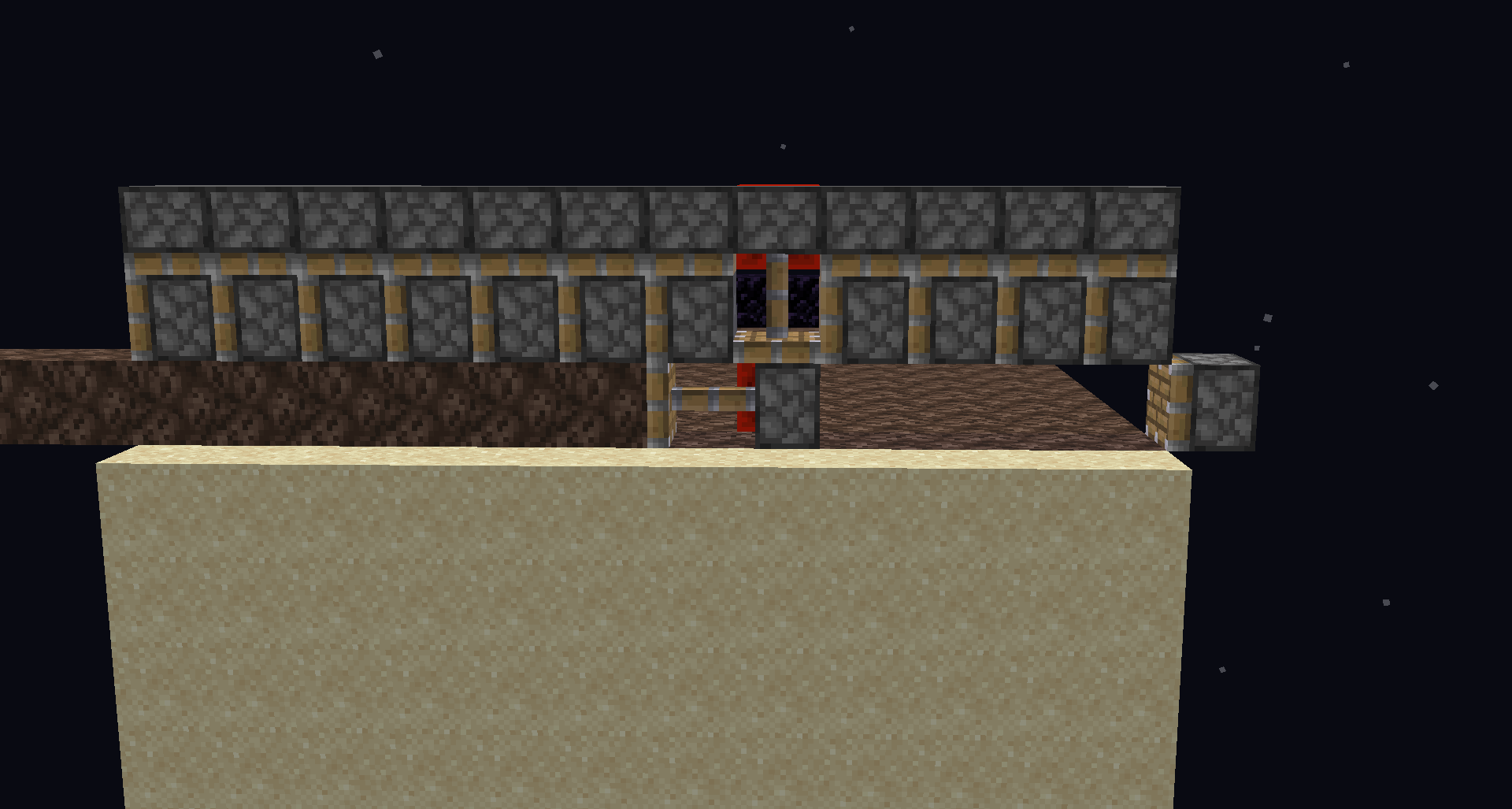 From right to left, you always first power the top (sticky) piston, then the bottom (regular) one, then unpower the bottom one and then unpower the top one, then proceed one block to the left. If it's easier, you can also unpower all top pistons at once at the end. Every bottom piston is only responsible for pushing the soul sand row one block further. This also means that you can push it much further than you could with the single piston on the right, so you have more space for wiring in that area on the left.

As a counter, maybe this one or one of these is helpful or maybe something based on this, but less extreme.

Observers at the end of the rows and columns are probably a good way to trigger more pistons, that way you don't need as many counters in total.

Maybe this contraption by Mumbo Jumbo could speed up the machine, it generates an entire row of cobblestone at once.

If you generate stone instead of cobblestone, you can use an Efficiency 5 diamond/gold/Netherite pickaxe and Haste 2 to instantly mine it, that way you save yourself a lot of time and have a much lower risk of accidentally breaking the pistons (because you can quickly swing your cursor from side to side, never resting on a piston for long enough to break it).

And now have fun wiring up this monstrosity!

3
How to build a triple flip-flop?

4
How to make a tree miller
0
Is there a trick to place a boat without adequate space?
2
Compact, failproof inexhaustible Elytra launcher?
3
Spawn-proofing the nether-top sheep farm
2
How do I force players off a rail when dismounting a minecart?
3
Most efficient way to prevent PP updates in blocks Minecraft, to create floating sand
5
Send baby villagers through flowing water into soul sand elevator
0
How do I correctly rewire this 2x3 flush piston door in 1.12.2 Minecraft Java Edition?