Explain the best Y level (height) for mining in Minecraft

I favor mining in straight, torch-lit tunnels. There aren't any mobs and it's easy to find my way back out. But I've never really been sure how deep I should go for the best results. I've seen all kinds of varying answers, but most of them don't come with any real explanation and almost none of them show their work.

To make the question more specific, these are the resources I'm usually hoping to find when I go to mine:

I value them in roughly this order, though sometimes I want lapis more than diamonds when I really want to enchant some items.

I don't particularly care about:

So, what are the best Y levels to dig across in trying to get these resources, and why?

This answer applies to both Bedrock and Java edition.
This answer was written for version 1.16; later versions might differ if the world generation changes.

I'm taking "best" to mean quickest, or most efficient relative to the effort. In other words, how many valuable resources do we get per block we have to mine.

We need a minimum of two vertical blocks for walking. This allows us to see four Y levels: the two we're mining out, plus the one below our feet and the one above our head.

So the "best" levels would be the four contiguous Y levels where the resources we want are most common.

As you'll see from the graphs, expanding our range to more than four vertical blocks exposes levels where resources are less and less common, so it's more efficient to just keep digging straight than to make the mining tunnel taller.

In order to come to the above conclusion, I wrote my own program (using some of the tools already created by others), to analyze a two freshly created worlds, one in Bedrock and one in Java, both on version 1.16 with different random seeds.

The graphs that follow show the amount of each resource type found at each Y level. The raw data, as well as the program used to generate that data, are available, and links can be found at the end of the answer.

I did the Bedrock test first. I analyzed an area of ~530 chunks (35,676,160 blocks, including air). The area I analyzed didn't include any mountain biomes, so I didn't gather any data on emerald ore, but I decided not to worry about that since it's on the "don't care" list. 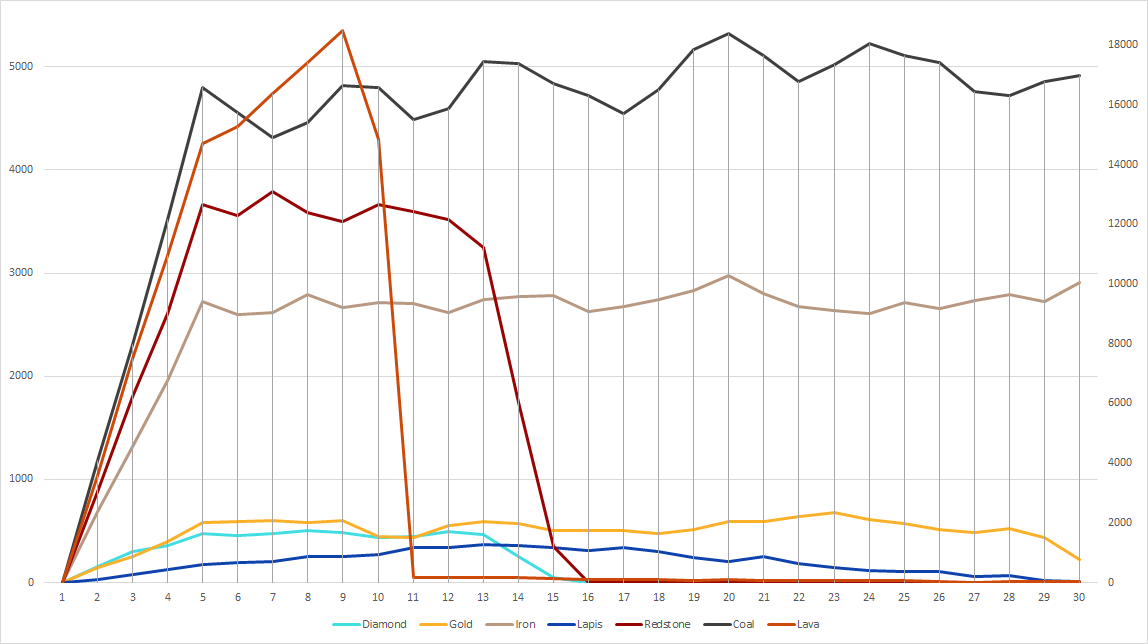 Graph showing every relevant block except for emerald

Note: Lava is on a separate axis (the one on the right), because there's much more lava than ore. All other resources are plotted against the primary (left) axis.

This first graph isn't terribly useful, since all the important resources are squished down at the bottom. Let's take off coal and redstone, since they're on the "don't care" list and are much more plentiful. We'll also take off lava so we can move the much more common iron ore onto the secondary axis. 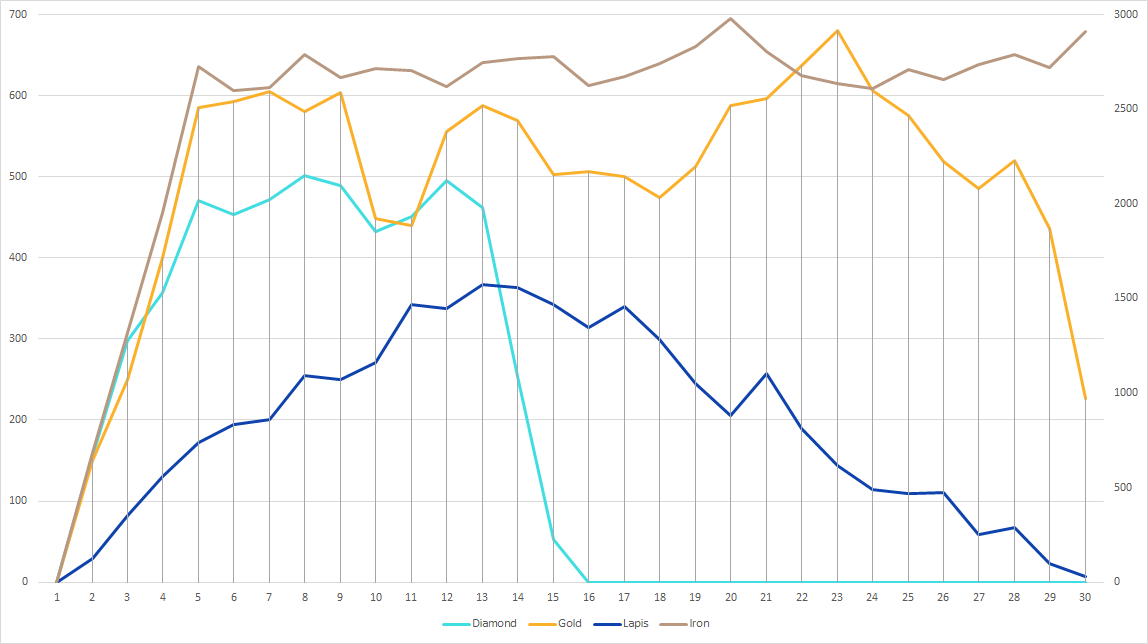 For iron, it looks like we can basically ignore it, since it's relatively constant within the range that also includes the other desired resources.

That said, the first thing I notice is there seems to be a noticeable dip in both gold and and diamonds on Y 10 and Y 11. But there is also a significant spike in lapis on Y 11.

Comparing this to the Java results (which also uses a larger sample size), I still see a (smaller) dip in gold and diamond only at Y 11. But I don't see any spike in lapis at Y 11. I'd say this is most likely due to sample size and random chance, rather than differences between world generation. It's possible, if not probable, that Y 10 and Y 11 would smooth out for all resources given a large enough sample.

For the Java test, I went for a larger sample size: ~1300 chunks (88,150,496 blocks, including air), almost 2.5x the sample size for the Bedrock test. Unfortunately, the output data was slightly larger than Excel could open, so for the analysis I could old use 98.7% of the output data.

This time, I did find a couple emeralds, but very few- too few for a meaningful analysis- so I'm leaving them off once again. 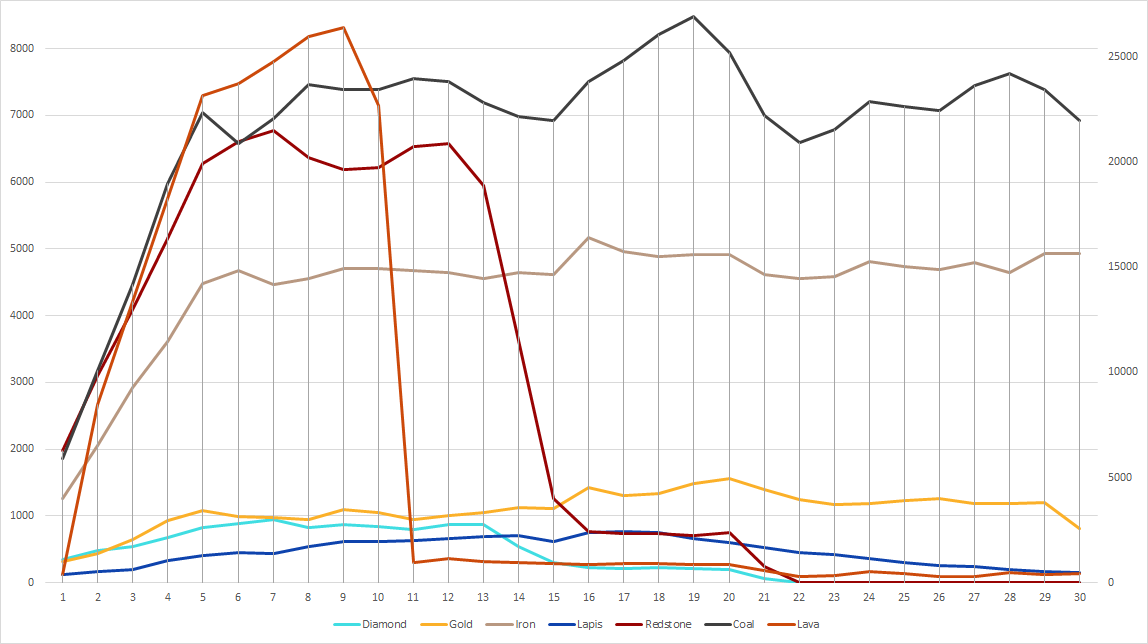 Graph showing every relevant block except for emerald

The full graph shows a very similar result between Java and Bedrock, with lava dropping off after Y 10, redstone dropping off between Y 13 and Y 15... and the rest a bit too squished too see.

Lets clean up the graph a bit the same way we did in the Bedrock test: take off coal, redstone and lava, and move iron ore onto the secondary axis: 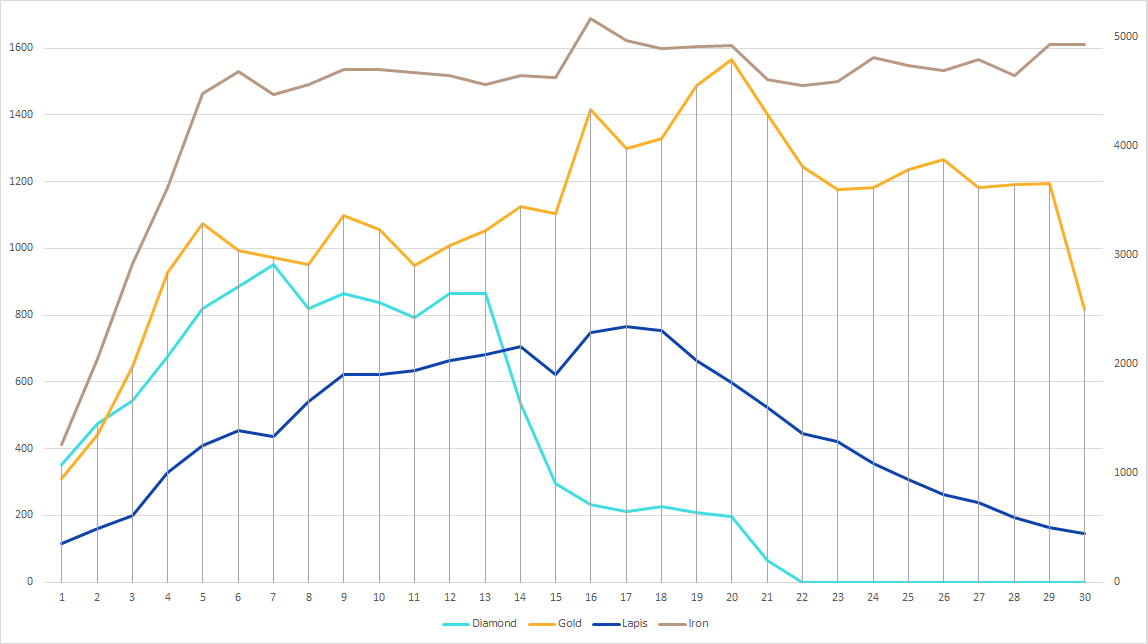 Again, things look very similar to the smaller Bedrock test. AS mentioned before, we still see a noticeable (but not nearly as large) dip in gold and diamond at Y 11 but there is no spike in lapis at Y 11. There is a noticeable dip at Y 15, but that's already too high for us to care about.

This leads me to the "short answer" I gave at the top. Mining at Y 12 and Y 13 keeps us in a good range for lapis (even if you ignore the Y 11 spike from the Bedrock test), while also avoiding the huge lack of diamonds at Y 15.

If you wanted to prioritize diamonds more over lapis you could move down one block and mine along Y 11 and Y 12. This avoids the drop in diamonds at Y 14, but will noticeably reduce the amount of lapis since you're moving away from its high-point. Also, this puts you directly over lava lakes so you'll have to be more careful and you'll be more likely to have your mine tunnels interrupted.

On the other hand, if you wanted to seriously prioritize lapis over diamond, I might suggest digging at Y 13 and Y 14, which would let us see levels 12 through 15. The Bedrock test seems to show this as the peek range for lapis (and not bad for gold either), however the Java test doesn't quite agree. Plus, if we do care about diamonds at all this is a terrible idea, since they suffer a serious drop at Y 14 and are almost gone by Y 15.

Performing Your Own Analysis

In an effort to be scientific and maybe help a few people out, I'm releasing everything involved in this analysis for public use. This includes:

With these tools, not only can you reanalyze my data to find anything I might have missed, but you are more than welcome to create your own Minecraft worlds and analyze those to see if there are unexpected differences.

If you do want to analyze your own worlds, keep in mind that Minecraft only saves chunks that have been changed- it won't bother to save a chunk if it's still exactly the same as when it was generated. To get around this, I used the /fill command to generate a layer of invisible barrier blocks in the sky over the chunks I wanted to analyze.

3
What are the max ores per hour using branch mining in Minecraft that you can mine?
14
How can I get rid of spiders webs?
6
Is Quarry Mining As Effective As Staircase Mining?
2
Best way to create shops for Minecraft 1.7.2 Bukkit/Spigot server
2
IndustrialCraft: Good early power system
1
What are the major levels for Mining?
1
How do I stop Zombie Villagers from spawning or Zombies
3
What are the exact percentages for likelihood of getting 3 diamonds from a diamond ore with Fortune 3?