Why is Kalista such a better pick on red side? (Heard on LEC Summer Split 2020)

Kalista seems to be considered by casters such a strong pick on red side, so much so that most teams on blue side are forced to ban it, unless they feel so comfortable playing it that they can take it themselves first (but casters insinuate this is not usually the case, meaning it must be qute a bit stronger on red side).

I've seen this question, Why are some champions considered to be better at blue/red side?

But still, even though some things I already imagined are mentioned (Dragon side, tribush, etc) I wanted a specific answer on Kalista's case from someone who follows the current LoL and LEC meta, and some other examples of picks whose priority to ban/pick changes depending on side.

Bot lane (where Kalista is normally found in professional play nowadays) is inherently safer when played from red side. Have a look at bot lane's map, where I've highlighted popular jungler ganking paths for each side. The red lines are red side's ganking paths, the blue lines are blue side's. 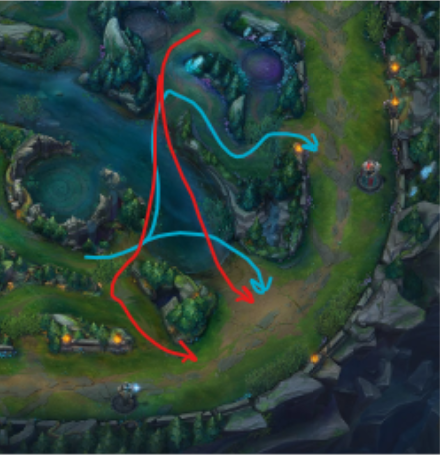 This is why you see a lot of blue side ADC's that have escapes and don't necessarily scale as well like Ezreal; they need to be able to handle red side jungle pressure. On the flip side, you're afforded more safety on red side. This allows you to play champions like Kog Maw, Jhin, and Kai'sa on red side. These champions have little safety but scale very well.

So put a scale heavy champion like Kalista on red side, and not only does her jungler have a much easier time assisting her, she's much safer from enemy junglers. Give Kalista a tanky, engage-heavy support, and you have a mean bot lane with a lot of kill potential if the jungler pays attention.

Let's talk about objective control next. 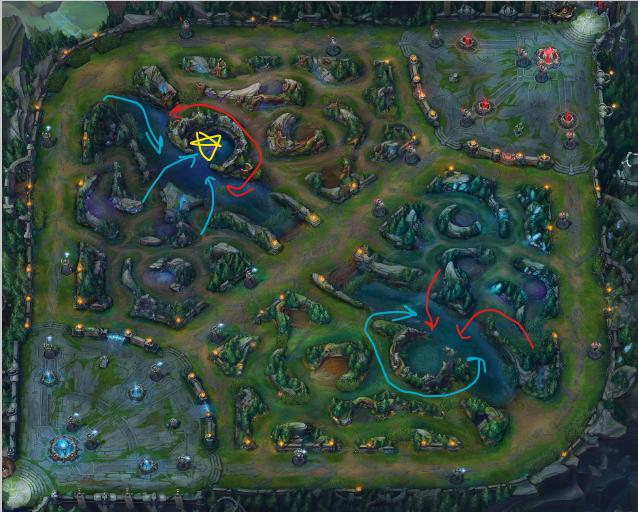 In the lower right part of the map is dragon. With Kalista's E, Rend and terrain advantage (ease of access to the dragon pit) early dragon takedowns are not only possible, they're easy when on red side.

From the question regarding Red vs Blue side, this answer mentions:

Also champions like Lee sin that can just jump into the pit to steal it are slightly stronger when played on the blue side, since the jungle behind dragon is Blue-Territory and thus much safer for Blue team. Trying to steal a Dragon during Early and midgame is usually much harder for Purple Team than for the blue team.

Which is true. However, with Kalista's E damage in combination with her jungler's smite, she should be able to out-smite any other jungler trying to steal.

This advantage becomes even more impactful when you consider Elder Dragon, which presents a very impactful late game buff.

With the ability for Kalista to securely scale into mid and late game (hopefully with a few dragons under her team's belt), she should be able to abuse her relevance as the game continues.

The yellow star indicates Baron Nashor. You'll notice that blue side has an easier time accessing the baron pit, but if Kalista's team is capable of getting onto baron before blue side, this is where Kalista's E once again comes into play. Being able to Smite + Kalista E baron at the same time constitutes a major secure potential.

There are other things we can talk about... Like how blue side doesn't want to play Kalista as badly because of the jungle threat, and the fact that Kalista is simply pretty powerful at the moment, but those seem tangential in comparison to the above explanations.

Not the answer you're looking for? Browse other questions tagged league-of-legends competitive-gaming .

19
Why are some champions considered to be better at blue/red side?

14
How to pick the best support for your ADC?
19
Why are some champions considered to be better at blue/red side?