What is the meaning of Separation Radius for ground units?

What does it mean when they say "Distance between Air units in squadron" for ground units?

Why is it not the same as Movement Radius?

Here are some stasts of separation radius: 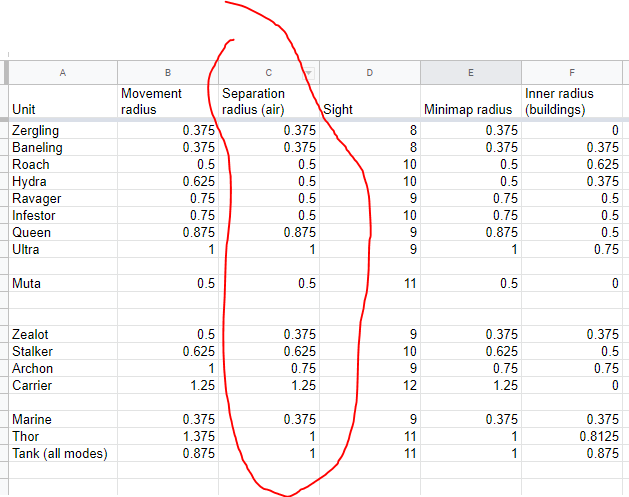 This ties into a system in Starcraft and Starcraft 2 (and Warcraft 3) called "stacking". When you select a group of air units and order them to move, they group up more tightly while moving, and then disperse when idle at the end. Therefore, they need two radii that describe how far apart they should be - one while moving and one while idle. In contrast, ground units don't stack; they have one radius that applies both while moving and while idle.

Radius is the main property controlling how "big" the unit is, both for movement and pathing and things like considering whether it's in melee range of another unit. Separation Radius is specific to the stacking behavior.

0.5 is probably the default value of the Separation Radius property (I think that's what the gray text indicates, but it's been ages since I played around with SC2 data); since the hydralisk is presumably not configured to use stacking movement, it doesn't matter what it's set to. If it were using stacking movement, it wouldn't make sense for the value to be equal to Radius.

5
Why does the # mean beside trained units in SC2?
19
What attack is used against the Colossus?
4
Is there a simple way to spread units out without retreating in StarCraft 2?
0
Marine Arena: Goliath multi-lock weapons system?
15
What are the new units in Heart of the Swarm?
6
In the roach evolution mission what do the multicolored crystals paired with the units Maye, Oynx, and Diamond reference?
9
Do widow mines splash ground units when targeting air units?
6
What are the details of the Thor's new High-Impact Payload mode?
6
How can I achieve a “formation move” in StarCraft 2?