Why were the player icons replaced with question marks in Yoshi Valley Mario Kart 64 track? [closed]

Questions about Game Design and Development are off topic. This includes speculative questions about developer intent, with respect to both mechanics and narrative. You might want to ask over at GameDev.SE, but be sure to read their FAQ

The map modes that show the player icons making circuits around the screen relative to their positions seem to work fine; however, the maze is so complicated that determining the racers' current positions is impossible, so the players' mugshots will just be replaced with question marks.

Were question marks used instead because of a hardware limitation on the N64 itself? Meaning the N64 couldn't keep track of all the racer's positions in real time? I don't think impossible is the right wording, because the first place kart is flashing rainbow on the minimap during the race, so the game tracks the kart in first position.

Or were question marks simply used to add some more fun to the multi route track, and never knowing where you're at exactly when playing? 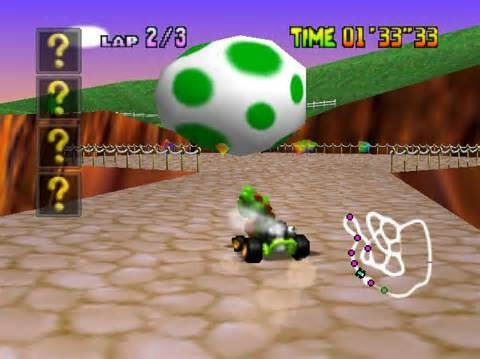 While I do not have insight into the game's code, there is evidence that there was no such hardware limitation.

Based on the evidense, it is very obvious that the Nintendo 64 is fully capable of keeping track of player positions even in Yoshi's Valley. Therefore, I believe that the question marks had nothing to do with hardware limitations, and were actually meant to add more suspense to the game, as players would have no way of knowing whether they chose the right path or not.

Not the answer you're looking for? Browse other questions tagged mario-kart-64 .