Do I need an Xbox Live subscription to redeem game codes I've bought?

So I'm thinking about buying a game key for Xbox One, since some of those are cheaper than the physical/digital copies from the original seller. I was wondering if I needed an Xbox Live subscription in order to redeem a code.

If not, can I subscribe to redeem it, then let the subscription end and still keep the game?

Not necessarily a paid subscription.

Without a subscription, you will keep being able to access games associated with the account. You do need access to the service to continue being able to download or stream game content, so you would require at least a Silver subscription, which is free.

XBox One will currently not support online play for most titles without the paid subscription. This may change in the forseeable future.

I haven't been able to find information on whether developers can directly code multiplayer into their games (i.e. their own account/server infrastructure) on the xbox one. Technially, yes, since xbox is at this point just a locked down x86 pc.

Some games might allow you to play online, but have a degraded experience, such as: won't allow you to see the Friends list or chat. This is actually an implementation flaw: the game doesn't check the subscription at the right time. Other (mostly older, more indie) titles with their own multiplayer infrastructure may also ignore the requirement. What's locked down by the paid account is the Xbox-wide multiplayer features; the friends list, microsoft hosted servers, the Trueskill matchmaking, etc.

Any game you purchase that requires XBOX Live Gold to play will have a warning near the "Buy" button. For example, Fallout 76 requires gold: 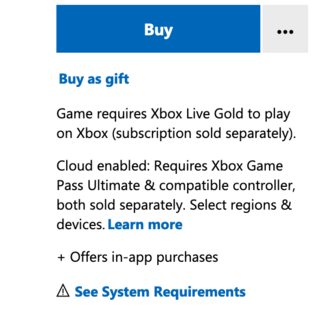 You can redeem any code you want to add games to your library, but you won't be able to play the games that require Gold without a subscription. Gold also offers some "free" games, but if your subscription runs out you lose access to them.

Not the answer you're looking for? Browse other questions tagged xbox-one xbox-live or ask your own question.

8
Entering Xbox Live redeem codes online (rather than on Xbox 360 console)
4
Change my Xbox live Subscription to PayPal
3
When I purchase a game on Xbox Live, will I get a copy on DVD as well?
8
Buying an "import" Xbox one model, what will and won't work?
5
What problems will I face if I buy an imported Xbox One?
2
How can I purchase a 12 Month XBOX Live Subscription from the XBOX Live shop with Bitcoins?
4
I have Xbox Live Gold; Will my son get gold deals with his own credit?
4
Do I need an active gold subscription to play the 360 "games with gold" on Xbox One?