Throughout the game you are presented with dialogue choices, do these matter in any way? I have found talking to some NPCs down a certain "route" will eventually lead to an item reward, but I can just try every route with the NPC and get that reward (at least so far)

As for more important things, like story dialogue, does this have more permanent effects? like character friendship or something? Is a dialogue choice I made early on going to have a butterfly effect for dialogue later?

There are dialogue choices that matter in very specific quests.

In the Archon Quest "Farewell, the Archaic Lord", during the "Downtown" section, there is a portion of the quest where you have to negotiate with specific NPCs to pay them. 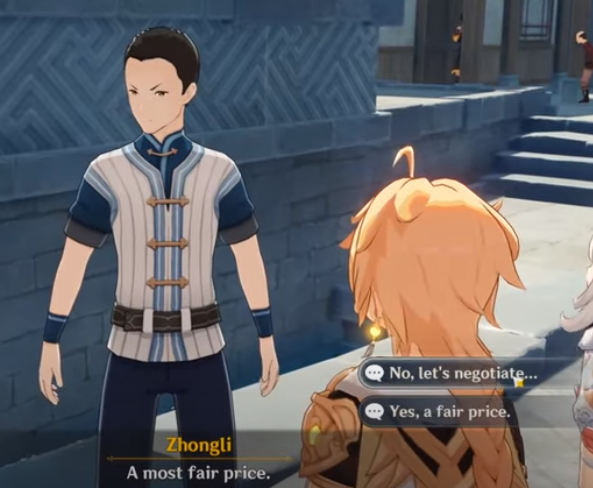 This leads to a better end result at the end of the quest, where depending on your actions, Childe lets you keep whatever is leftover from his initial investment of Mora. If you used up all of it, then you keep nothing, but if your conversation choices resulted in a better negotiation rate, then you'll pocket more.

The same conversation-dependent mood system can also be found in the Story Quest "Should You Be Trapped in a Windless Land" in the "Lionfang's Legacy" section.

All dialogue choices seem to be flavor text, and ultimately don't seem to affect anything after all is said and done. You also don't get any extra rewards for choosing any different dialogue (my group and I have chosen multiple different things and gotten nothing different to show for it).

Not the answer you're looking for? Browse other questions tagged genshin-impact or ask your own question.

34
What defines a JRPG, and how is it different from an RPG?