How can I buy an activation key for a game to activate on Steam?

I would like to buy a game to send it as gift to a friend. This is a Secret Santa though. It should be anonymous. I would like to buy legally a key on steam or any other official seller. Print this key of a postcard and send it by classic mail. How can I achieve that.

If it matters, I am looking for:

Related to (but not a copy because I am fine buying keys outside of Steam) Can I buy Steam Game Keys on Steam?

Nearly every digital retailer that isn't attached to a specific publisher sells steam keys. Humble Bundle, IndieGala, Fanatical, Gamesplanet,... nearly all of them sell Steam keys OR a key that is for a publisher-related platform. Pretty much the only platforms that do not sell Steam keys are Battle.net, Origin, Ubisoft Connect, Epic Games Store and GOG. These stores all have their own distribution platform built into their storefront and as such they do not offer Steam keys.

One thing I'd do different though is not print the codes, but if possible use "anonymous gifting". This is a feature of Humble Bundle and possibly other retailers that allows the person receiving the gift to redeem the game through an emailed link and then copy-paste the CD key into Steam instead of having to manually enter a complicated CD key into Steam by hand. It also means that there's less chance of the code getting intercepted somewhere by a malicious mailman or neighbor.

Note that many of these storefronts have frequent sales that may make one store or another more attractive to buy a certain game from. There are websites that track these sites and aggregate all the sales into an easily readable list. I personally use isthereanydeal, but there are other platforms that work just as well.

Something to keep in mind: there are key resellers out there like G2A or Kinguin that you should not buy from under any circumstance, especially for indie games. These key resellers acquire many of their keys through illicit means like stolen credit cards or physical copies from cheaper areas, and they do the absolute minimum necessary to stop this. There are many indie game developers who would rather you pirate their game than buy it from these key resellers, because if these games were originally bought using a stolen credit card, the eventual chargeback fees financially hurt the developer.

Generally speaking, if a site is listed on isthereanydeal or the /r/Gamedeals Subreddit, the site is an authorized storefront that follows proper commerce rules and should be safe to buy from. If the site isn't mentioned on there, you can probably assume it's an unauthorized key reseller that you should avoid buying from.

You can find the games mentioned on humblebundle.com.

On checkout, you have an option to get a giftable link. You can put the link on a QR Code and print it before sending it by postcards in an envelope. 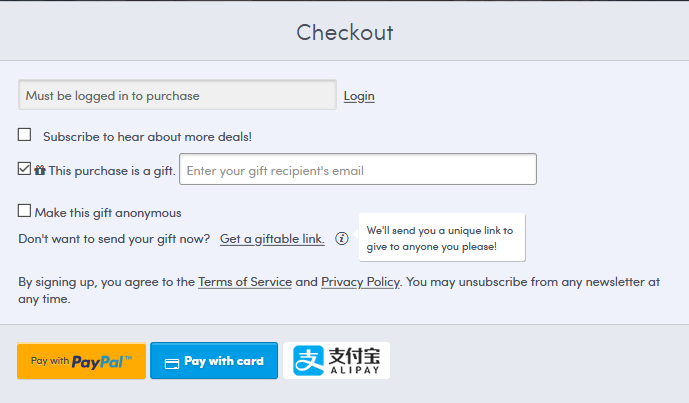 This way may not be the best solution though.

12
Can I buy Steam Game Keys on Steam?

28
What happens if I activate a product key on Steam for a game I already own?
3
Can I activate the Trackmania 2 Steam Key on Maniaplanet?
11
How do I activate a Steam key?
16
How to view CD key for a Steam game?
0
How long does it take for the Steam activation key to activate?
12
Can I buy Steam Game Keys on Steam?
28
Buying someone a Steam game without a Steam account
6
Can you activate a region locked Steam key without a VPN?