How does the Golden Lute (the weapon) work?

When you fight the Necrodancer, you can only damage him using a unique weapon, the Golden Lute. What is the attack pattern on this thing? Does it attack two squares in front of you, one? Does it attack diagonally? How much damage does it do? I can't seem to figure it out.

You attack by moving next to an enemy. The Lute deals one point of damage.

Below, "adjacent" means in a neighboring tile horizontally or vertically, not diagonally.

Source: Once you beat the Necrodancer, you unlock a character who wields the Golden Lute, so you can practice with it in the lobby.

From the Weapons page of the Necrodancer wiki: 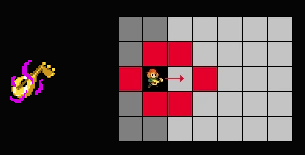 You can hit all enemies (even multiple at a time) in the red tiles when you move. You must move in order to deal damage, so you cannot directly attack an enemy like most other weapons.

Not the answer you're looking for? Browse other questions tagged crypt-of-the-necrodancer .

5
Does the coin multiplier affect money pickups or money drops?
14
How is it possible to get killed by the Green Slime?