Can you reset perks and stats in Cyberpunk 2077?

Is there any way to re-spec perks and stats during the game in Cyberpunk 2077?

You can re-spec your perks but not your attributes (so far--this could change in an update).

To re-spec your perks, you need to buy a single-use 'progression' shard from any Ripper Doc. These are 100,000 eddies, though, so start saving!

The shard is called a "Tabula E-Rasa" (clever play on words, that), and here's what one looks like: 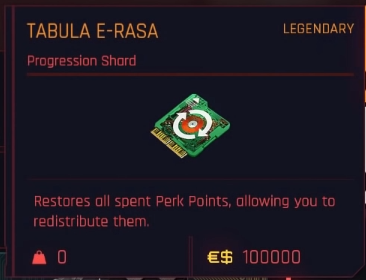 I found a way to re-spec both perks and stats. However this approach will also reset the experience gained for each individual perk category and needs quite some effort.

Therefore you will need the Mod: Cyber Engine Tweaks (you can also find the corresponding Github repo here)

You can find the installation guide here

The Mod provides a console that can be opened with a key that depends on your keyboard language:

The console is using Lua. Then in the console you can execute these commands:

1.Reset spent perk points to avoid any issues that may accompany stat changes and having perks higher than should be available.

2.Set a variable to count the size of your attribute point pool

3.Get each stat value and increase points by the difference between their value and 3 Alternately get the player's level and add 6 to it

i.e. points = 56 is the maximum amount of skills to re-spec because 71 points is the amount of total points you can have

4.Set each ability and its related skills back down to 3 We want to avoid discrepancies between Attribute level and skill level. If the player doesn't wish to lose skill levels, sucks to be them. They'll have to set them manually later using SetLevel()

5.Give out the attribute points

Found the script in the corresponding GitHub issue

However this approach still requires a lot of manual work and I am looking forward for functionality that automates the task of reading the users level to automatically reset the attribute/stat points with one script instead of that many console commands.

Not the answer you're looking for? Browse other questions tagged cyberpunk-2077 or ask your own question.