How to optimise the Four Corners Farm layout with Junimo Huts?

I have access to Iridium Sprinklers and Deluxe Scarecrows for crop coverage, as well as any lower-tier sprinklers.

I've been using this planner to help me plan my farms. I think I got an idea for yours too, but it's not looking pretty... You're also not going to be able to ride your horse into The Backwoods with this layout as the path left is too narrow and there's no way to have your stable right next to your house/cabin for easy access to fast transport. I really focused on covering as much tillable area of the map in as little Junimo Huts as possible. This is the 'optimised' plan, using 15 Junimo Huts.

For your 128 interactable items, I would recommend building a Shed and upgrading it to a Big Shed. This will mean it will only take up 21 spaces of farmland, and if you give the interior a layout like in the image below you'll have 129 interactable items in that space, which are all easily reachable with a controller: 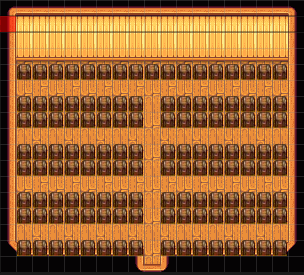 For the 'basic' Junimo Hut area of a square, put a Deluxe Scarecrow either on the left or the right side of the Junimo hut entrance. For most of the huts, then place Iridium Sprinklers, like in the picture below. Leave the space between them free for now, it isn't worth the resources putting in other sprinklers to cover that. Since you're playing the 1.5 version, once you get Pressure Nozzles put those on the sprinkles circled in red. This will increase their radius to a 7x7 square and make sure you have everything covered except the Junimo Hut itself and the three tiles in front of it. 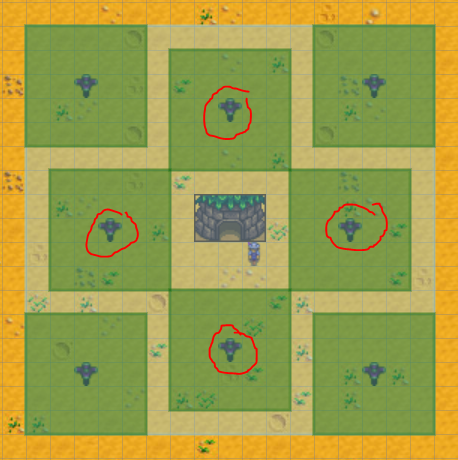 Find the huts that cover the most 'square' areas first and use the above sprinkler placement as a guide. If you really want to cover all the space that isn't taken up by farm buildings with crops and Junimo Huts, you're going to need 4 huts to totally cover most corners. And even then, you're not going to be able to cover absolutely every square as you can't block the Junimo Hut entrance with e.g. a watering hole.

You're also going to have to do some creative sprinkler placement on the huts that aren't covering a square area or are overlapping a lot with already covered areas. There's honestly so much overlap and wasted space, that I would think thrice about whether to spend that many resources on making huts, sprinklers and getting pressure nozzles. Seeing this I would recommend to stick to no more than 1 or 2 huts per corner, and fill the rest with other stuff that also earns money or makes resources that you may need for crafting. Remember that while Junimo's harvest the planted crops, you're going to be spending quite an amount of time just tilling and sowing seeds each season if you want to use all this space. My 'optimised' farm has only two Junimo Huts and I easily spend a day just tilling, fertilizing and then sowing seeds in the area around those two.

The planner doesn't let me do it, but move the finished Greenhouse (which is a 7x6 building) away from the center of the map, and into the corner marked with scarecrows, next to your house. The area that becomes available that way is covered by the huts as placed in the map below. Don't be freaked out by the red areas: They indicate 'untillable' soil, but that doesn't mean they're inaccessible. You can still put buildings some of it, like your silo and one stable next to your house. 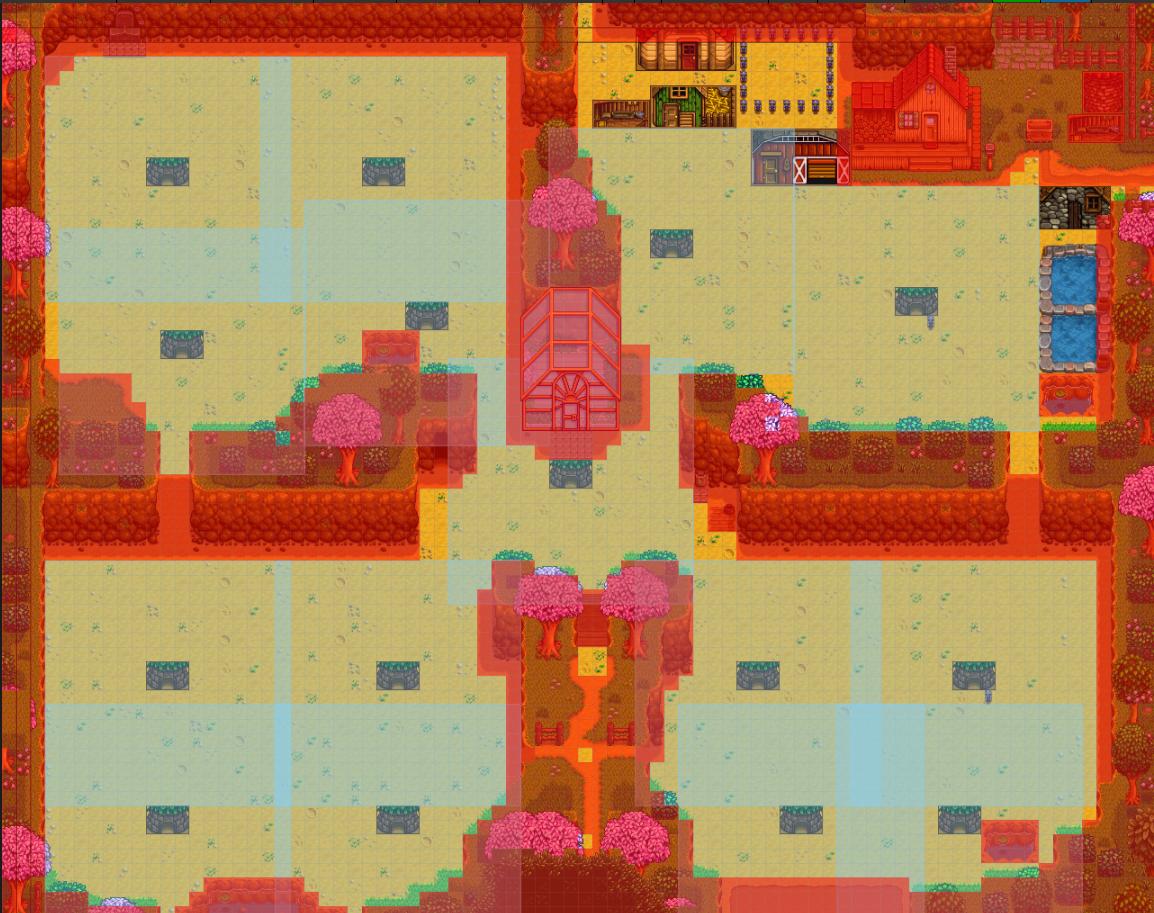 Not the answer you're looking for? Browse other questions tagged stardew-valley or ask your own question.

8
How do I get the keys to the sewer?
23
How exactly does the Tapper work?
12
How do activities with my spouse work?
12
Do pigs find truffles while you're not in the farm?
3
How do I have level 13 out of 12 friendship with my wife?
6
What is the advantage of the wilderness farm?
3
Are the renewable stumps in the new forest farm hardwood?
4
What are the best fishing locations on the new farm layouts?
38
What in the world happened with my cauliflower?