I am looking into Block updates, particularly PP ones, after I discovered this weird, but useful glitch: 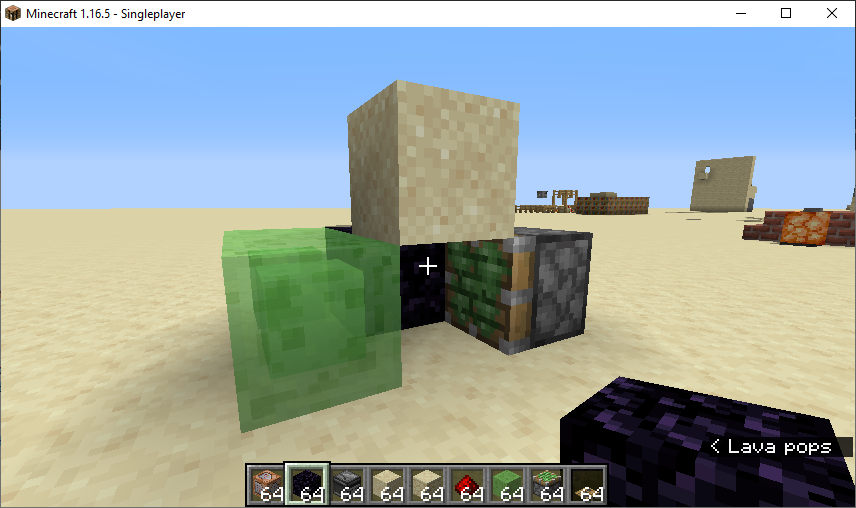 The idea is that when retracting a sticky piston with slime blocks that cannot be pulled the piston retracts without causing a PP update. This means that floating sand is, once again, possible. This method works 100% time, in any direction. also, because of the positioning, you can remove all the blocks, and they will not update the sand, and make it fall.

The old method for doing this was the rosebush, which would hold up the sand, then when breaking the bottom block of the rosebush, would break the top, but the top part would not trigger a PP update, as it was never broken. Mojang fixed this by making it so two-tall flowers could not support sand anymore.

But back to the question: is there any other way of preventing PP updates? This method does work, however, as the top of a piston is not a full block, you cannot place floating torches, flowers, snow layers, and other items that require full blocks to be placed upon. I am particularly interested in any methods that would allow for a patch of floating sand to be constructed. I was able to make strips, which allowed for an alternating pattern, but I was unable to get a completely flat patch, which was my objective: 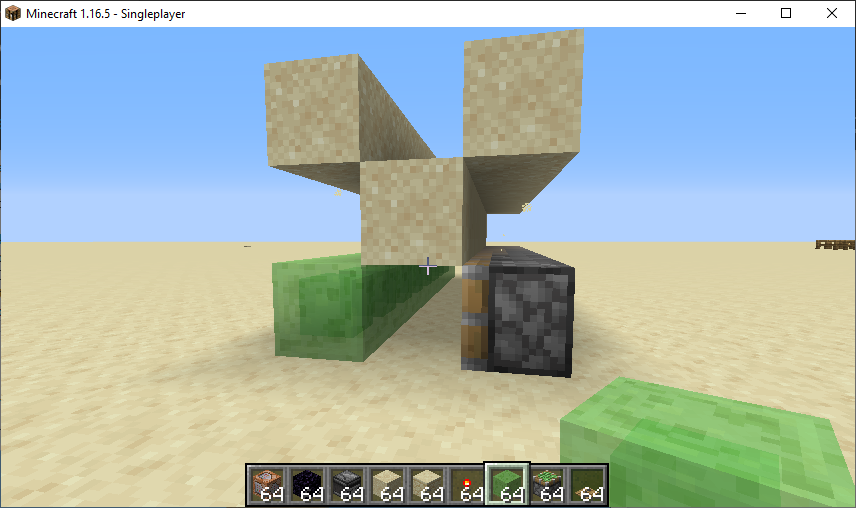 So, to summarize, what are the different methods of preventing a PP update while changing block states, and, could any of these methods be used to make a falling-block floor? And furthermore (although not necessary), could there be a method which removes a full block face, instead of a piston-head side (this would allow for floating snow layers, and floating grass)?

Using a debug stick, I was able to get rotate the piston head to get a full block, so I could get floating snow layers, torches (redstone torches power the piston indefinitely, meaning they do not work), etc. 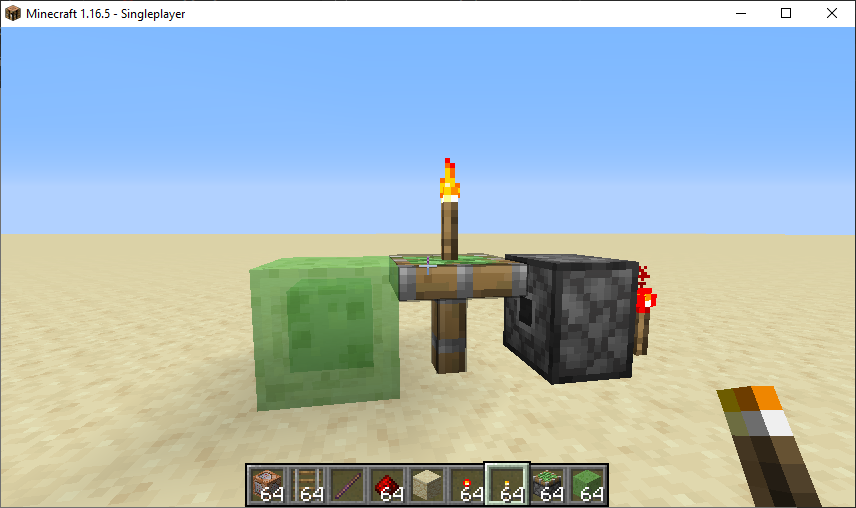 This is a step closer to my goals, however getting a debug stick in vanilla survival without cheats is virtually impossible. Would someone be able to recreate that with headless piston magic?

I was successful in my headless piston quest. 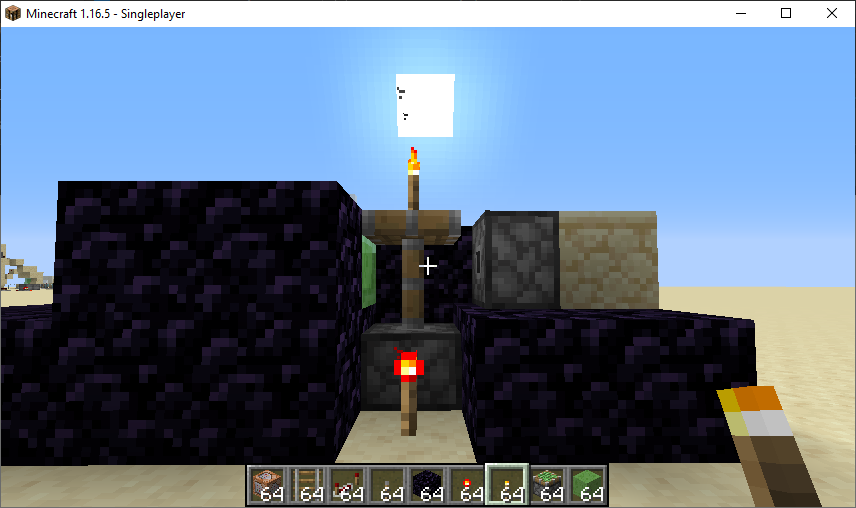 The idea is that the first piston's head is blown away by tnt. Then you extend another piston beside it. When you retract the original piston, it takes it's head away, but because of the glitch described in the question, there is no PP update. this allows it to have a full vertical face, so you can place a torch upon the piston head, something that was not previously possible 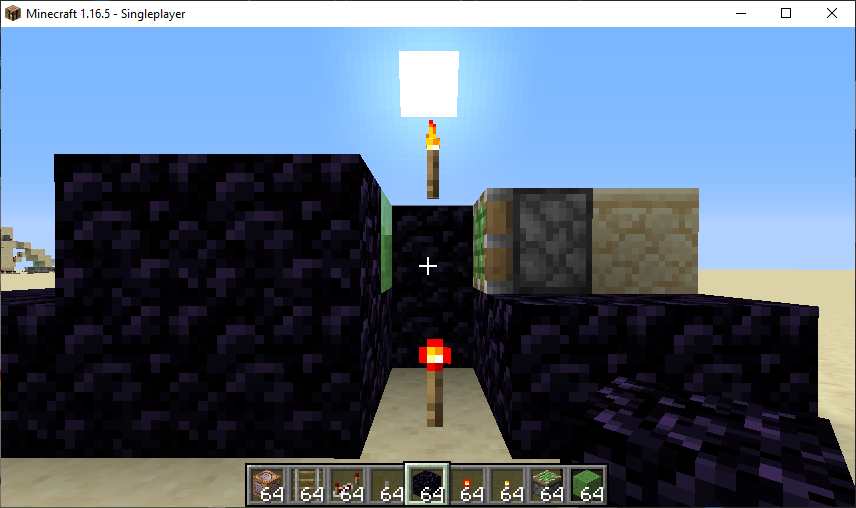 I have attached steps below:

First step You want to build an obsidian floor. Because you are using explosives, this step is just to ensure it does not destroy your world. The floor should be 6x7, with these four blocks removed: 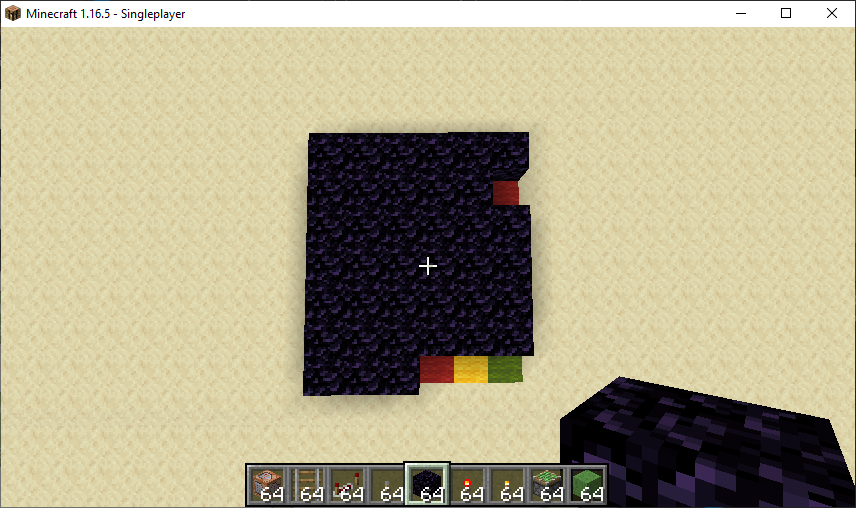 Next, you add walls along the left, bottom, and top (the torches are for clarity, you can add them or not): 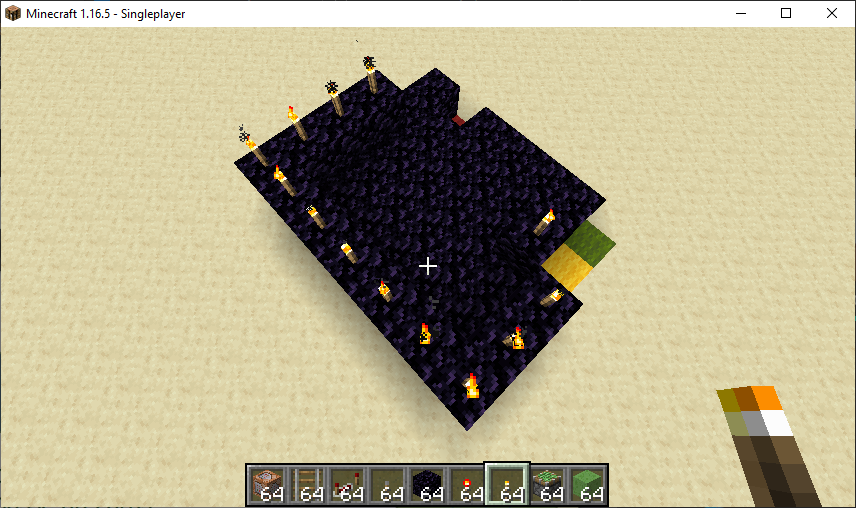 Step three Add redstone. You want to add two pistons in the top-right corner, an activator rail in the bottom left, and a lever in the very bottom left. You want there to be exactly forty ticks of delay between the activation of the lever, and the extension of the upper piston: 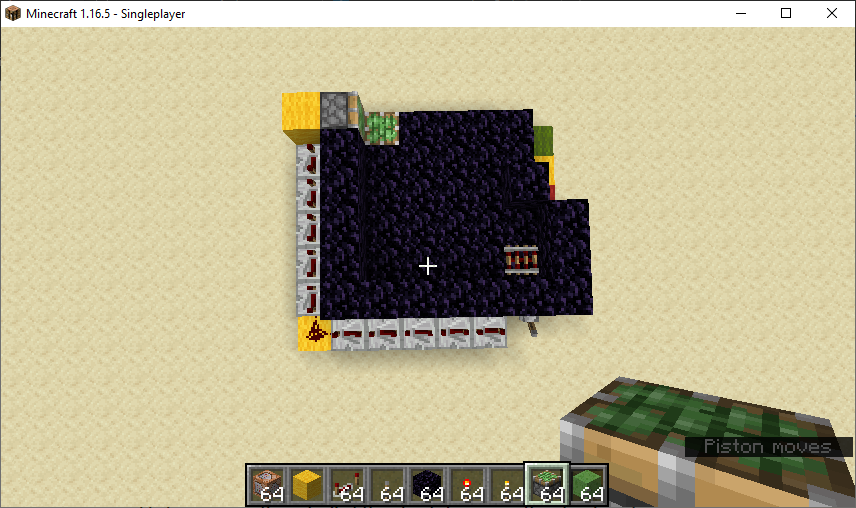 This is a fun step, you get to blow thing up!

Get a tnt minecart, and place it upon the activator rail. Whenever you're ready, flick the lever, and the minecart will explode at the same time the piston pushes. This will result in a headless piston. You may need to try multiple times. 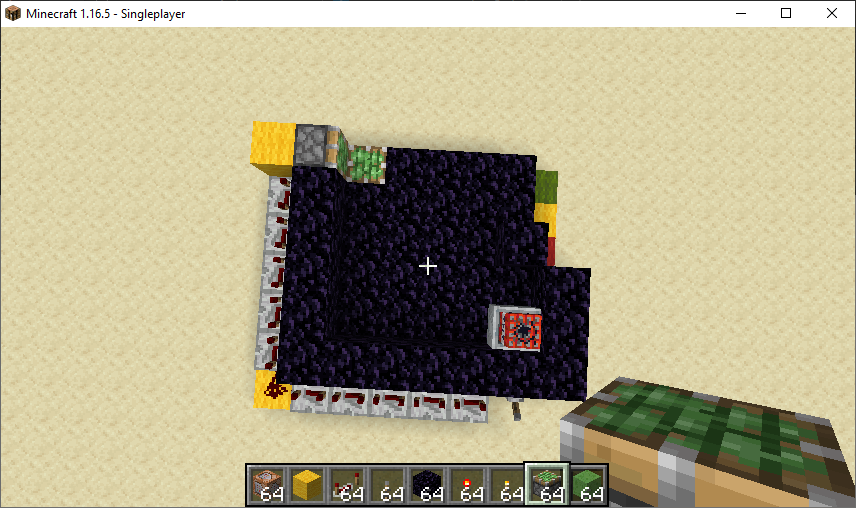 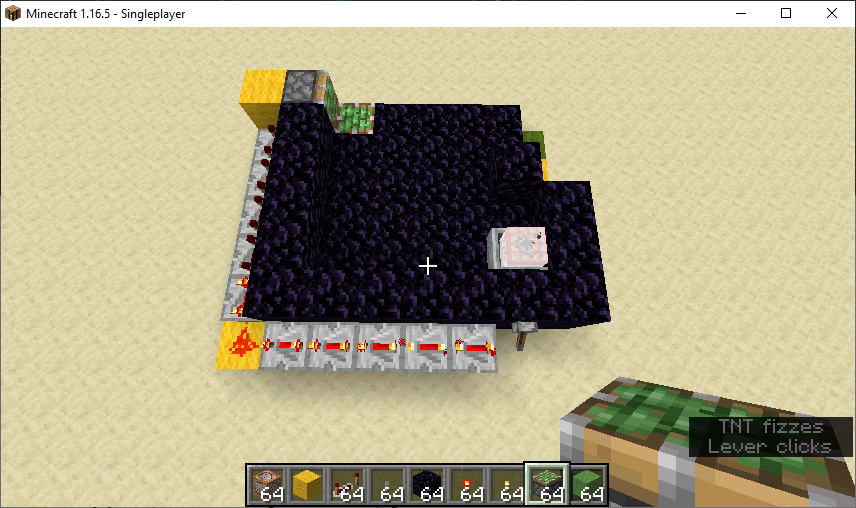 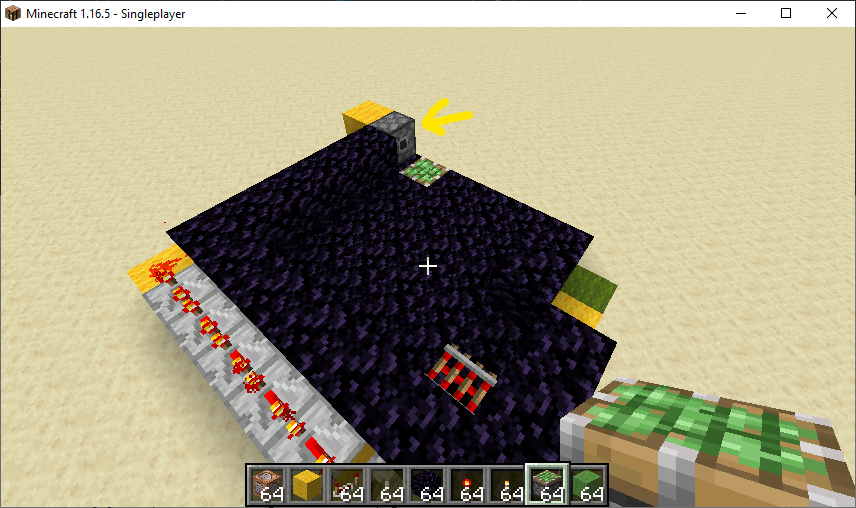 Step five Now, you want to power the other piston, DO NOT UNPOWER THE LEVER. If you do, you will have to repeat step 4. 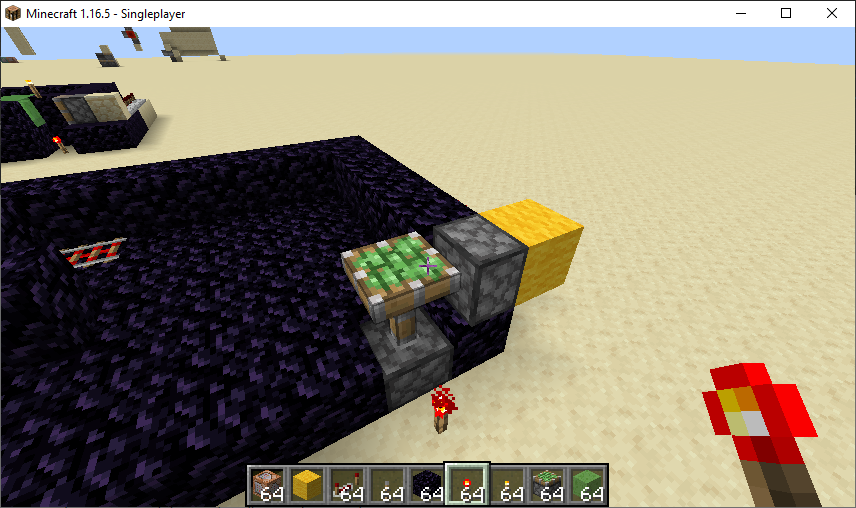 Step six Place whatever block you would like on top of the piston, I'll use a snow layer. Also, build an 'L' shape with slime blocks around the vertical piston 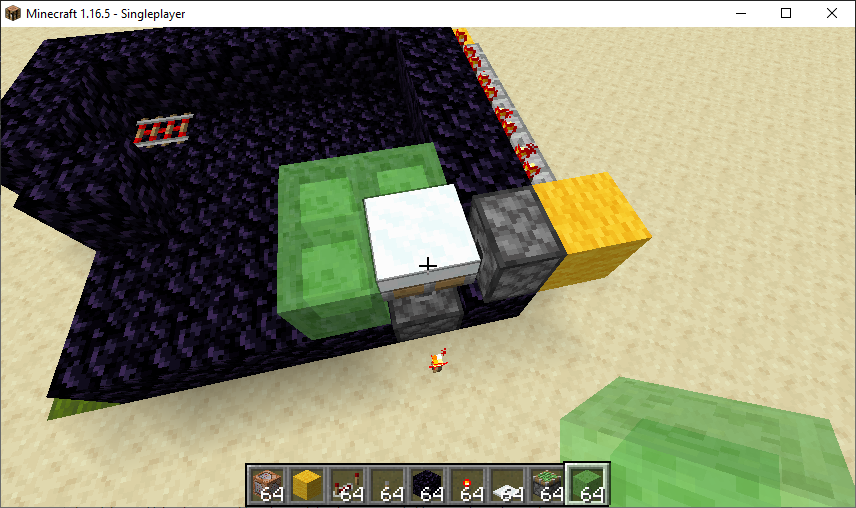 4
How to make a tree miller
2
Snow in the nether
2
Is there a way to make a piston push any block in front of it, when that block is placed?
0
How to make a simple portable rapid piston toggler?
4
Which blocks can't be covered in snow?
0
Change Block State using Command Blocks and Carrot on Stick
2
How to supply a piston feed tape from a large cube of blocks