Can you re-recruit Dorn Il-Khan after dismissing him?

In the Baldurs Gate 2 EE each of the party members can be dismissed after which they usually return to the same place where you've met them for the first time (or to a place significant for them for other reasons). Usually, when dismissing you can also ask them to stay and wait wherever you are at this moment.

However, when I've dismissed the Blackguard Dorn, the only option was to immediately get him back to the group or confirm the removal (in a more or less insulting way). After confirming the dismissal, he just grumbled that "I am a fool", and disappeared.

Can you re-recruit him before Throne of Bhaal? If so, where is he hiding after dismissal? IF it matters, I've completed his personal quest by staying loyal to his original demonic patron.

He goes right back to where you found him originally.

I had Dorn in my party so I ran a little experiment. I dismissed him using the "reform party" option in the character screen. There were no dialog options for "wait here", but if it matters I chose a dialog path that was effectively "you're making a mistake"/"it's been known to happen". He then vanished from my current location.

I found him back where he was originally, loitering on the corner outside of the High Hall of the Radiant Heart, in the Temple District of Athkatla.

Here's the exact location on the local area map. Dorn is the blue circle on the left indicated by a red arrow (the other blue circle is a loitering peasant.) 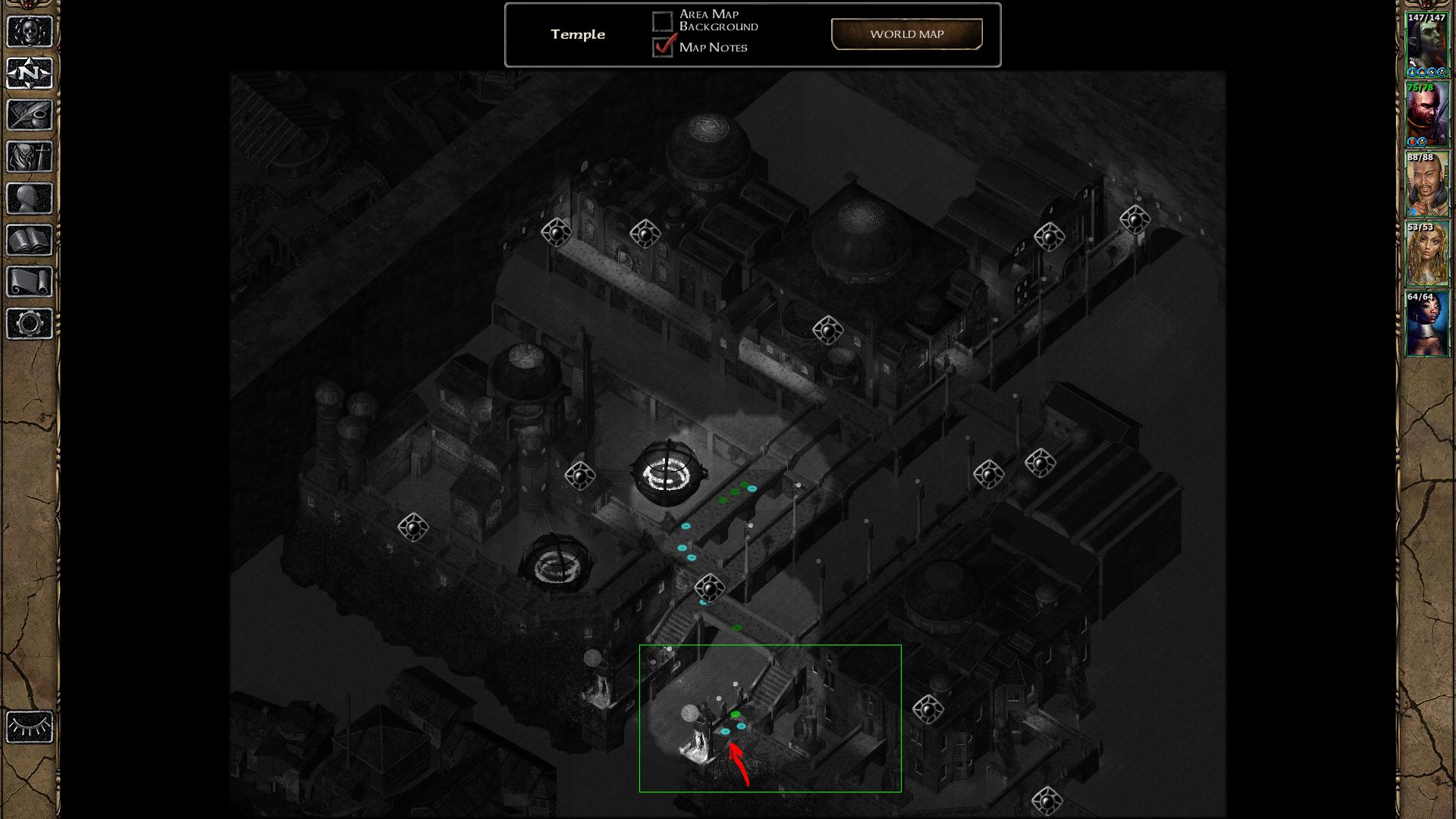 If you talk to him, there is an option to have him rejoin your party: [2] I would have you join me again, Dorn Il-Khan. 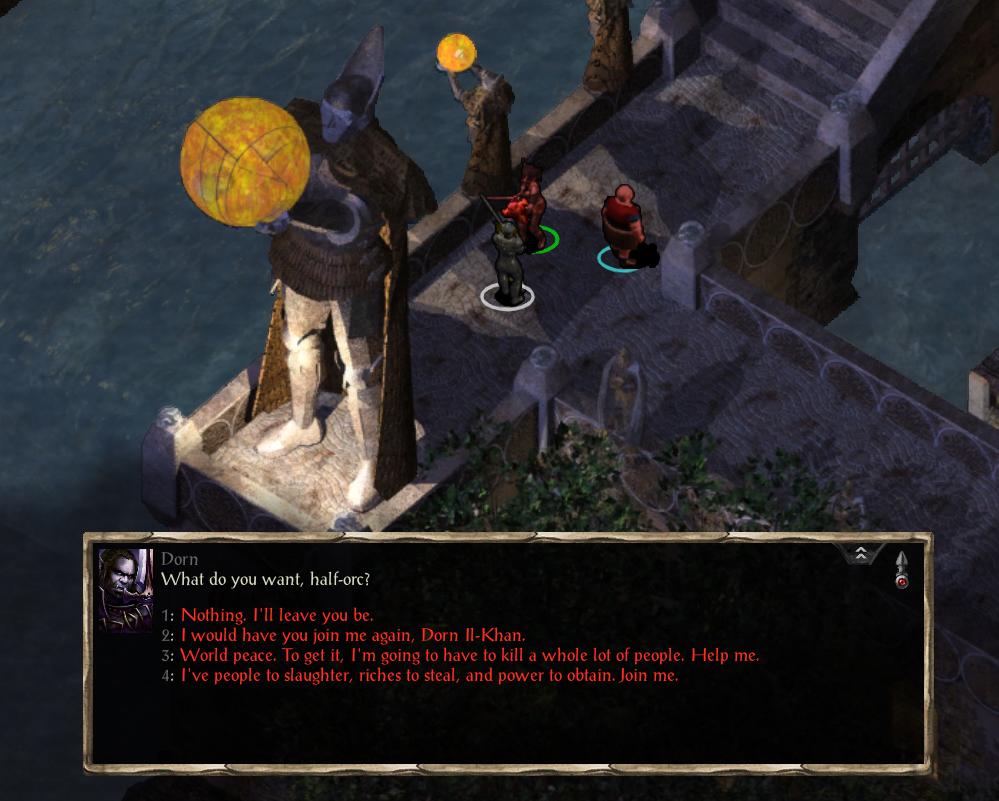 ... Of course he then plays hard to get: 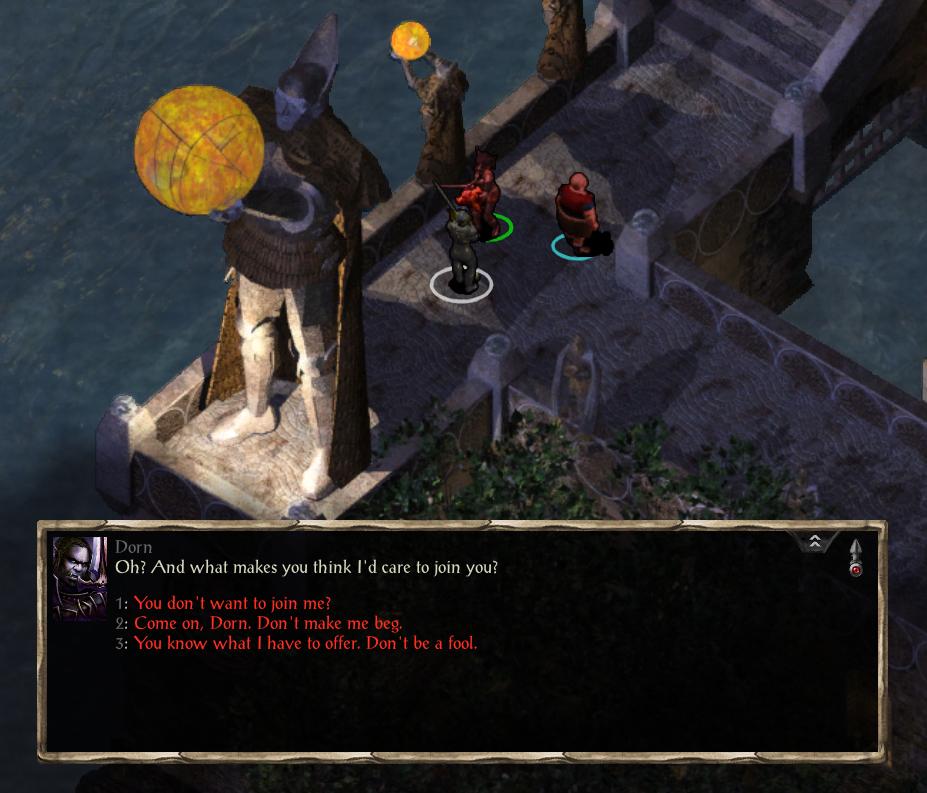 If you go with the third options, he gets annoyed that you've called him a fool, and then agrees to give you one last chance:

I'll give you a chance, <name>. One chance. See that you don't disappoint me

Is that actually the last chance?

Luckily I had nothing better to do to run a third experiment, and I dismissed him again and went through above dialogs again. Nothing changed, and he warned that he was giving me "one chance" (a second time.) So in this regard it seems like he's like most of the other companions in that you can dismiss and rehire him at will.

(Note that I've not completed his personal quest; I've only done the first stage and murdered the priest; I'm not sure if this has any affect on this, but none of the dialog options appear to mention any his quest line.)