Where in the Zelda timeline does Skyward Sword fit?

I thought I read somewhere that Skyward Sword was to be the first Zelda game in the timeline, but now I can't find that source.

Is there any indication where Skyward Sword fits in the timeline?

There's been new light shed on this, by Nintendo itself in the form of a Zelda artbook. 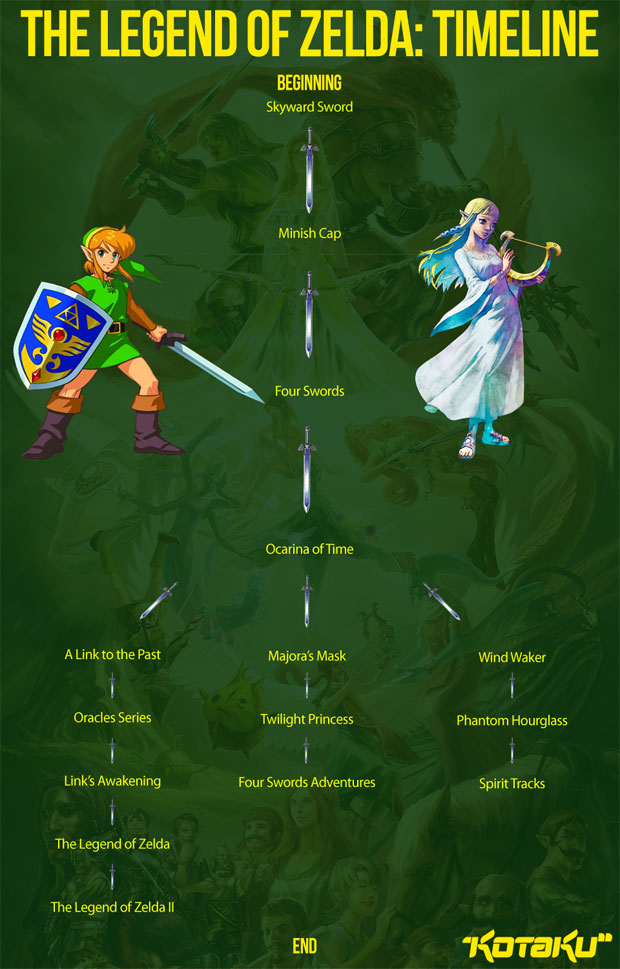 According to Eiji Aonuma (the series producer), Skyward Sword is set before Ocarina of Time:

I have already talked to Mr. Miyamoto about this so I am comfortable in releasing this information – this title takes place before Ocarina of Time. If I said that a certain title was "the first Zelda game", then that means that we can't ever make a title that takes place before that! So for us to add titles to the series, we have to have a way of putting the titles before or after each other.

...which would make it the first chronologically so far (at least according to Shigeru Miyamoto and those theories that previously put OoT first).

The timeline is generally contested and conflicting information is given. The wikia page linked above also includes the "generally accepted" order of groups of games, saying it's unclear how the groupings relate to each other.

Note also that Miyamoto has also said there's more than one Link, which further messes with timelines, although as Ashley notes in the comments they claim to have a magic formula that resolves all the paradoxes :P. I don't believe they have anything that makes any sense, personally.

As expected, the timeline in Jeff's answer isn't as canon as it appears:

[T]ranslations of less sexy parts of the same book reveal that Zelda overseer Eiji Aonuma has thrown up some pretty hefty disclaimers over the canon of the timeline.

Chapter 2, "The Full History of Hyrule," arranges the series in chronological order so it's easier to understand, but from the very beginning, Zelda games have been developed with the top priority of focusing on the game mechanics rather than the story. For example, in Ocarina of Time, the first installment of the series I was involved in, the main theme was how to create a game with pleasant controls in a 3D world. Or in the DS game, Phantom Hourglass, the focus was having comfortable stylus controls. Finally, in the most recent game, Skyward Sword, we focused on an easy way to swing the sword using the Wii motion plus.

Thinking of that way of developing the games, it may be correct to say that the story is an appendix to that. I even think that setting Skyward Sword as the "first story," was merely a coincidence.

While reading over "The Full History of Hyrule," it's possible that some parts may look contradictory. For instance, the Mogma race or the beetle item that appear on the very first story do not appear on any other game that takes place in the future. I'd like to ask everyone just to enjoy the book and to be broad-minded, and to think that those parts are the way they are because of the way Zelda games are developed.

In other words, it's a timeline, sort of, but only in so far as it's what they've thrown together and casually arranged after the fact. So those people stressing out over why some parts fit the provided chronology and some parts don't, relax!

This Loldwell comic captures all of this pretty well:

Seeing as the game involves the creation of the Master Sword, you can assume that it must come before any games that include said sword (or are clear sequels to such games). So, the only games that could possibly come before it are:

So, Skyward Sword must come before any of the other games, while it may or may not precede the ones in the above list.

Just finished the game, wanted to share my thoughts on the timeline debate. What's special about Skyward Sword is that it does not take place at one point on the timeline. Frankly, I think the events of Ocarina of Time take place in between the two key times this game occurs in. Demise is resurrected and defeated in the past. The Master Sword is also planted in the past. The exact time frame is uncertain, but Impa goes from a young adult to a very, very old woman in the present. Also to note that Impa is in Ocarina of Time, still not elderly looking (though that may be limitations of the game itself), but with graying hair. Certainly in between her youth of the past, and extreme age of the future. This too means that the Zones of Ocarina of Time must become what the world is in Skyward Sword, of course that's not hard to figure. Death Mountain becomes Eldin Volcano, Kokiri Forest becomes Faron Woods. I'll get back to Lanayru as it's special. Demise also obviously becomes Ganandorf of OoT, apparent in his story of reincarnation, and in just plain appearance (tan skin and fiery hair, a big ole nose). So, OoT's Link does his short quest within a 7 year time frame, and plants the Master Sword back in place. I also think Twilight Princess takes place before the present in Skyward Sword. Kokiri Forest has already become Faron Woods, but Death Mountain and Gerudo Desert retain their OoT names.

Now to fun Lanayru Desert time. Accounting for the Time Zones, you visit Lanayru Desert a thousands years in the past. There is a vast ocean at this time, and I think Windwaker, Phantom Hourglass, and Spirit Tracks take place here, at varying times before present Lanayru Desert. There's also evidence for Windwaker to Tie in Demise, with his glowing scar across his forehead, a reminder of the fatal stab to the head Link delivered in Windwaker (remember, Skyward Sword is not the creation of Demise, only his resurrection). And I know Spirit Tracks wasn't nearly as popular as main Zelda titles, but I loved it dearly, and so was shocked to see an easter egg from it in Skyward Sword. At the end of the Lanayru Mines dungeon, the turn table from Spirit Tracks is revealed. That being the central hub for the Spirit Tracks region, where it was a rather tall tower (but of course, you travel underground in the dungeon, so the tower has clearly sunken considerably). The distance in time between Windwaker and Spirit Tracks also gives evidence to Lanayru Desert. While Windwaker is in an entirely flooded world, Spirit Tracks, taking place much, much later, has much more land mass, but still a very considerable ocean presence. The receding water levels are well illustrated, and the ultimate result is Lanayru Desert, formerly Gerudo Desert.

I could go on with what came before Windwaker, but it wouldn't relate to Skyward Sword's placement.

Another thing to add is that the dragon's names are used in Ocarina of Time and their symbols are used for the 3 orbs in Windwaker. At the end, there is a curse placed upon them and their next reincarnations forever which explains why all the other games have many of the same characters. Hylia is also the name of the goddess in Skyward Sword which the lake in Ocarina of Time must have been named after.

It is placed at the beginning. There is an official timeline now and Here you could find a Nice explained reason why:

Vi also says in the end (to link) they'll meet again. So its pretty save to say Skyward is basicaly the first.

Not the answer you're looking for? Browse other questions tagged zelda-skyward-sword .

9
What happened to my Loftwing?
6
When does the treasure merchant Sheikah Stone become available?
17
Is it possible to make Link left-handed in Zelda: Skyward Sword?
3
Is there a list of all ancient Hylian text in the game and its translation?
9
Does the original Zelda theme ever play in Skyward Sword?
4
What's the most efficient way to earn Rupees early on in Zelda: Skyward Sword?
1
Legend of Zelda Skyward Sword Silent Realm Skyloft Secret Area?
6
Is the Goddess Harp from Skyward Sword the harp Sheik plays in OOT?
3
Where can you find the dragon of Eldin Volcano?