Is everyone in Bloodborne blind?

In Bloodborne, a lot of the NPCs are wearing some form of eye covering, or showing some form of astigmatism. Until recently, I didn't think much of it until a Youtuber (during a Bloodborne playthrough) stated that everyone was blind.

This does make sense, especially with the concept of "insight" (or sight using the mind's eye), as well as the items like the "eye of a Blood-drunk Hunter", etc.

So, in Bloodborne, is everyone blind? And if so, what is the lore behind it?

To answer the latter first, the combat relies on line-of-sight. Take the regular hunters you fight early in the game: if you walk around a corner and a hunter sees you, he'll attack. If you walk slowly behind one he won't notice you and you can stab him in the back. They even have lines indicating, if not sight directly, the concept of "looking" for the player. ("Found you!", "You can't hide for long!", etc.). You can even look at close screenshots of hunters without their early clothing and you can see they have relatively normal eyes. 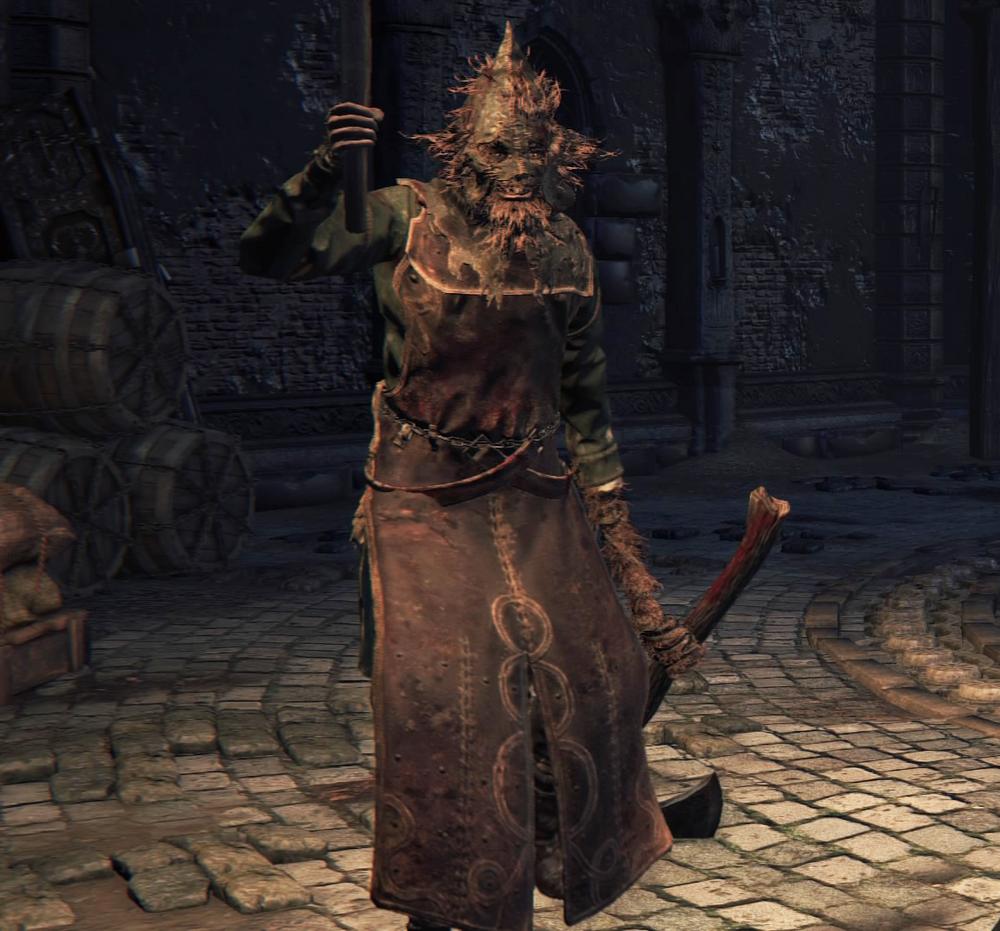 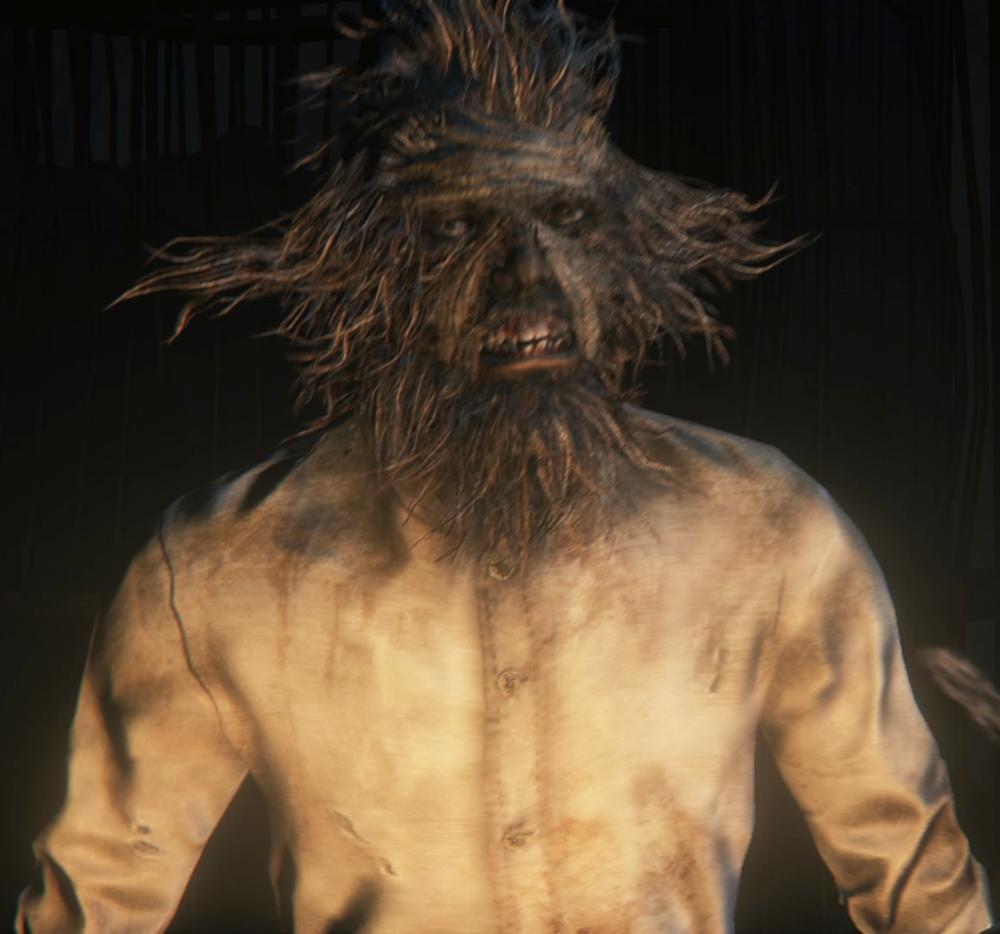 Hunters that you fight who have the same move pool as you also tend to wear eye-coverings, but not always. One guy wears glasses, which doesn't make much sense for a blind person. 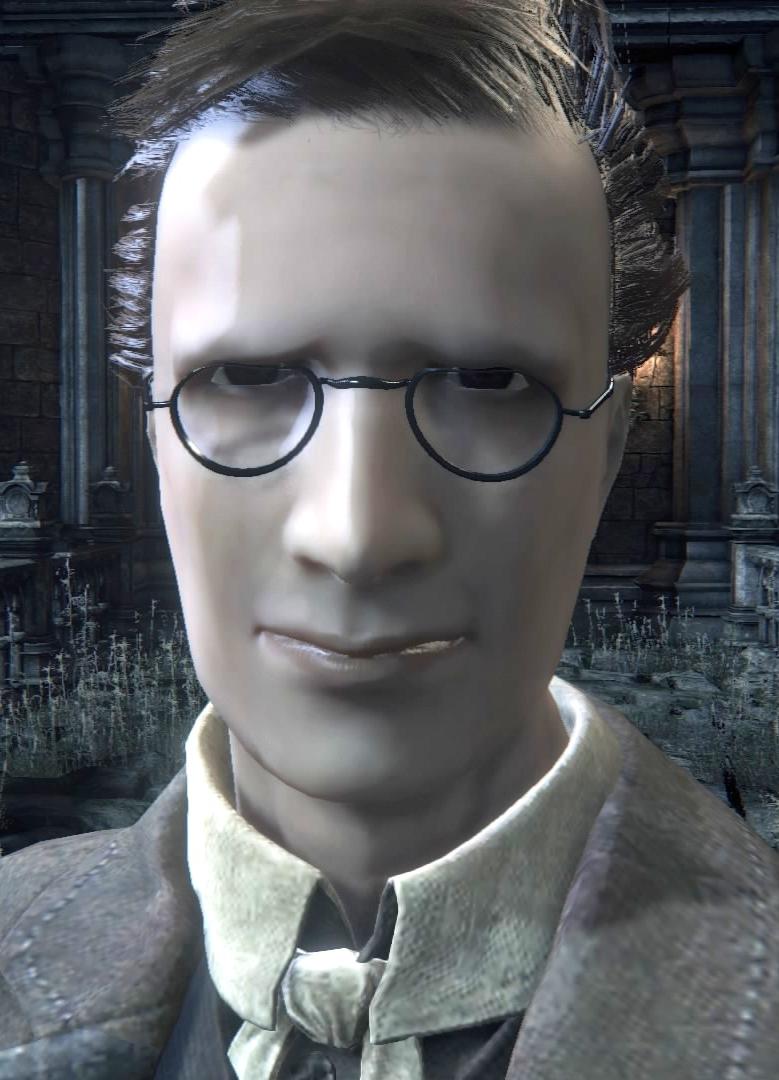 Even outside of the humans, plenty of monsters play around with the concept of seeing the player.

The Winter Lantern enemy attacks by looking at you.

The Brain of Mensis looks directly at the player and sees you move your body in a certain gesture.

Ludwig's mid-fight cutscene shows his eye move and focus like a normal eye, albeit after beating some sanity into him.

Plus, your character and other people can read and write notes on pieces of paper. And the entire gesture system would be kind of pointless if not for sight.

All of this seems to indicate that the eyeless look is more of a cultural dress style than a practical concern.

As for a quick note on the lore reasons why people dress in a way that seems to disable or remove the eyes, that would require almost a full write-up of the game's story. Short answer is, the covering of eyes doesn't have any gameplay modifications that causes people to act blind, it only provides story and motivational information for characters.

Story and lore wise; it's a little blurry1.

As it is fairly well known, Blood Ministration has a physical effect on the body, in many different ways, and depending on the level of blood "taken" (i.e. consumed through healing, or consumption via Blood Cocktails, etc.) it can really start to transform people physically, leading to the transformation into beasts.

A particular state that is mentioned is "becoming blood-drunk" which, as described by the item Eye of a Blood Drunk Hunter, has an adverse effect on the physical eyesight (emphasis mine):

The eye of a Blood-Drunk Hunter. Its pupil is collapsed and turned to mush, indicating the onset of the scourge of beasts.

This is also shown in the trailer for the game.

In addition to this, as stated in the question, a lot of the Characters in the game like the Blood Minister, The Suspicious Beggar, and Master Willem (which is a similar but different case; I'll get to that later) as well as a lot of the aggressive Hunters (Gascoigne, Djura, Crow of Cainhurst, etc.), and even some enemies like the Silver Ladies have some kind of face covering to show that they are not using their eyes, so even if they aren't actually blind, they are certainly unable to see: 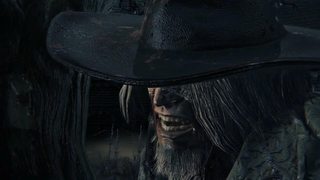 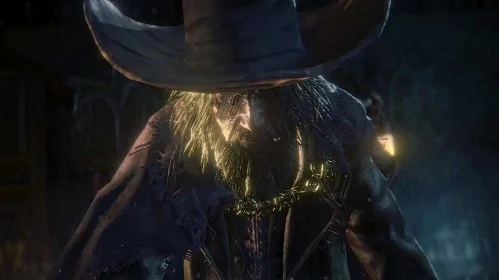 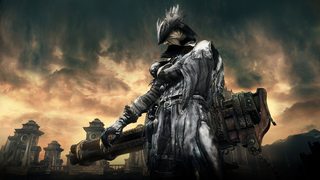 This video suggests that this is actually done willingly, as a means to "shield themselves from the Eldritch Truth".

All of these characters have some strong link to Beasts, and Beast Blood in some way or another, indicating some form of deprecation or addiction to the Blood2. This however doesn't mean they cannot identify you, even without their ability to physically see. There are a lot of references to smell throughout the game as well:

Father Gascoigne (upon entering phase 2 of his boss fight): "What's that smell? ... The sweet blood, oh, it sings to me. It's enough to make a man sick"

Arianna (first interaction in her house): "Oh, my, what a queer scent... But I'd take it over the stench of blood and beasts any day.

Annalise (after kneeling): "Visitor… Moon-scented hunter… I am Annalise, Queen of Castle Cainhurst.

Use and development of "Inner Sight":

As the game goes on however, the story leads into a more ethereal/eldritch reasoning behind the use of "eyesight", Such as Master Willem, having a specially fashioned eye covering, as if it was his intention to lose his eyesight, or not use his eyes, but not due to anything to do with the Blood or its effects; but in fact the opposite. The interactions that are shown with him seem to be pointing out a deeper understanding of the Blood's ability. This also leads to a physical, and meta-physical change in the representation of what exactly "eyesight" is. After killing Rom3, a lot of enemies physical appearances change, such as the Church Servant (their Lanterns become covered in eyes and can shoot magic darts), which can also be revealed when one has enough Insight collected (15 or more).

This then develops further, once the Nightmare is uncovered. Winter Lanterns, instead of having a head, have an engorged brain with eyes. The Brain of Mensis also has this appearance, suggesting an "inner sight" (or "insight"). Micolash also states:

"As you once did for the vacuous Rom, grant us eyes, grant us eyes. Plant eyes on our brains, to cleanse our beastly idiocy." [...] "The grand lake of mud, hidden now, from sight."

Micolash does not have any eye coverings, or even any visible eye conditions, so his request for eyes insinuates the desire for a deeper insight; or revealing something that is hidden from physical sight. In addition to this, the Mensis Cage suggests it is a tool to help reveal this:

The cage is a device that restrains the will of the self, allowing one to see the profane world for what it is. It also serves as an antenna that facilitates contact with the Great Ones of the dream.

And finally, the Research Hall in the Hunter's Dream shows patients that have no eyesight at all, both physical and sometimes metaphysical4:

"Has someone, anyone, seen my eyes? I'm afraid I've dropped them in a puddle. Everything is pale, now..."

This area then leads on to the Fishing Hamlet, full of transformed enemies, (likely due to the curse of Kos (after having killed it), or their proximity to the corpse (speculation abounds), but the Accursed Brew item also suggests an understanding of "inner sight" through the representation/understanding of eyes in the brain:

Skull of a local from the violated fishing village. The inside of the skull was forcibly searched for eyes, as evidenced by innumerable scratches and indentations.

A lot of this points to the evidence of a physical evolution into something higher, beyond the physical limitations of regular eyesight; the desire to see beyond, or to see The Beyond. After all, "seeing is believing".

Long and short, it is fair to say that a lot of the people in Bloodborne are physically blind, either by choice or not. The reason for this however, is not always a by-product. In the early stages of the game/story, it is caused by physically covering one's eyes to hide the Truth, eventually leading to disfiguration caused by the Blood, but as it goes on, it is willingly inflicted in search of higher understanding, making the physical eyesight redundant.

1. Pun Intended.
2. Except Djura, there is little evidence of this; his storyline focuses primarily on the remorse he feels for the beasts of Old Yarnham, and very little about his own status - but the other hunters have clearly tipped over (like the one wielding the Gatling Gun in the Hunter's Nightmare.
3. After Rom is killed the Pthumerian Queen appears. There is a lot of research about the Pthumerians and their link to the Great Ones, and there apparent lack of physical eyesight, in place of their own Inner Sight, and a lot of theories mention their "sunken eye" appearance being due to their lack of need for them.
4. They do however, show signs of auditory functionality; they refer to Lady Maria when you enter the room, showing indication that they can hear your presence, and the aggressive enemies only attack when you aren't walking (i.e. running, thus making noise), get very close, or attack another enemy when they are close; Enlarged Head Patient; Strategy.