What is the name of this Macromedia Shockwave game with a small plumber unclogging pipes from the inside?

This was a Macromedia Shockwave game I played online, which was likely made before 2008. 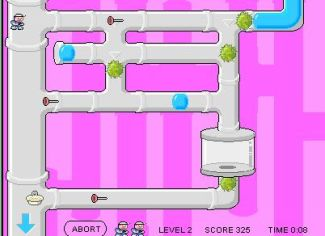 The gameplay was pretty straightforward: we had to unclog the pipes and help all the water flow down. If any water remained stuck, or if the character died (shocked by a power outlet), you lost a life and eventually lost if you ran out of life.

The website on which I played it (when it existed) merely called it "Plumber" (although it's likely that they made up that name; most of the games they hosted didn't have the original name as displayed when you launched them). Unfortunately, the game wasn't archived on Archive.org.

Does someone remember the name of that game by any chance?

The game is called Puny Plumber.

I did a Google Image Search for your screenshot, which found me the website of its developer, Pizmo Games. Their copy of the screenshot is called "punyplumber2.gif".

Searching "Puny Plumber" will find you various Flash/Shockwave game sites that claim to have the game, although I wasn't able to run it. Here's an example: https://www.gameitnow.com/Puny-Plumber-online.

Not the answer you're looking for? Browse other questions tagged game-identification flash or ask your own question.