How to defeat a raid easily

How do I defeat a raid? I keep dying from them, especially ravagers. How do I survive it and get hero of the village? What are the best tools to use?

Raids are pretty hard, but here are some steps to be able to easily defeat them.

Before you start a raid, make sure you have all of these things:

Diamond armour, a bow, a stack of arrows (Or just one if you have infinity), a sword, and as much food as you want (I prefer a stack of cooked beef), and a shield.

Here are some general tips, and how to defeat each enemy.

Pillagers: Pillagers are the easiest to defeat. You can easily shoot them from your roof, or come outside and block with your shield if necessary while finishing them off with a sword.

Vindicators: Vindicators are pretty hard to defeat. Try shooting at them with your bow. These guys hold axes, and run fast while dealing lots of damage.

Witches: You probably have seen these before. They are fairly difficult to defeat, but easy if you shoot from afar with a bow.

Ravagers: Big monsters that are very difficult to defeat. Try to stay indoors while defeating them with a bow, or the door method.

Evokers: Probably one of the nastiest hostile mob, they attack by summoning big spikes on the ground in front of it, and creating vexes. Try to shoot from afar with a bow.

Vexes: These aren't spawned in the raid but are summoned by evokers. They are tiny little ghosts with iron sword that despawn fairly quickly and can pass through walls. Try to stay away in the open and hit them with your sword.

This is pretty much all you need to know about finishing the raid. If you have any questions about my answer, let me know in the comments.

In the former case, Banana's answer is probably the best, balancing the amount of effort preparing for the raid (very little), and fighting it (quite a bit), for a reasonably low "total". You'll get the advancements, you'll possibly get some loot, and you'll enjoy discounts, providing you survive, which won't be that easy, especially with evokers releasing vexes on you.

If you want to get more serious about it though, and get actual good stream of profits from raids, including plenty of emeralds, totems of undying and 'hero of the village' status on demand, you should build a raid farm.

First off - the standard villages are hard to defend, so let's create a better one. Simply kidnap one of villagers (get him in a boat, then "row" over land, potentially using pistons to lift the boat or digging your path in dirt to cover any hills along the way), and transport him a good 200 blocks away from the village, preferably onto some open, mostly flat terrain, maybe not too far from a pillager outpost (but not so close as to be harassed by the patrols while building!).

Next, dig a decently deep hole - deep enough that accidental vexes won't find the villager (~15 blocks deep?), place a bed and a workstation right for the villager's occupation (any for unemployed) at the bottom, a light source so no zombies would spawn to kill your villager, drop him (in the boat) into the hole, release from the boat, then seal everything up. There, a village no raid can harm!

Now prepare means of fighting the raid: mark a 3-wide area slightly (1-2 blocks) to the side from the villager cell, then dig, or wall off (with 1-tall wall) a flat area that will flush all enemies towards the 3-wide hole - a rectangle of 16x19 space with corner sources raised (not to flood everything) is one option, but anything that will flush the enemies to the hole will do.

Example: ice where you want the initial water sources (using ice to generate them is probably the easiest approach) 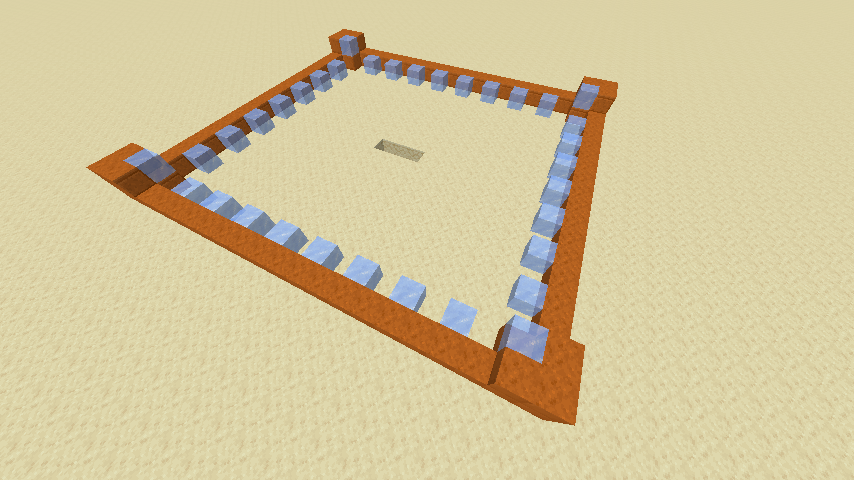 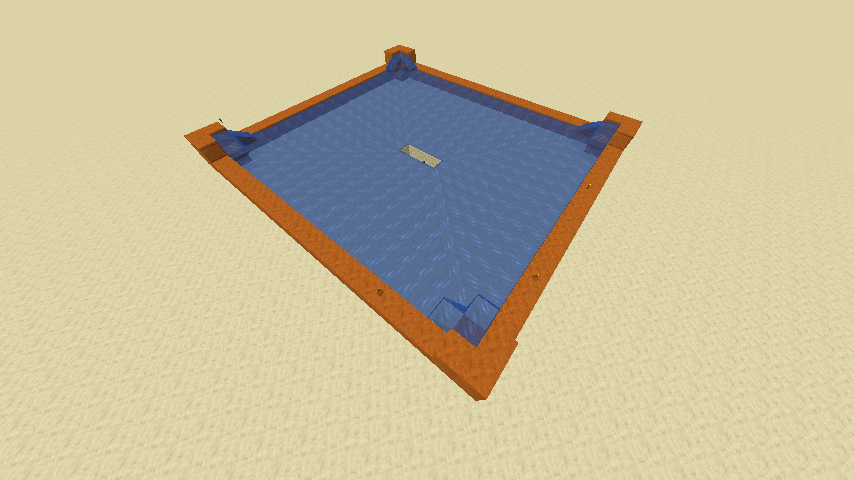 Next dig the 3-wide hole 28 blocks deep, and at the bottom prepare the kill chamber - extend the 3-wide hole into a 3-wide 3-tall corridor, place 3 hoppers connected to 3 double chests under the hole, slabs on top of the hoppers, solid blocks 1 block above the chests (leaving a slab-sized slit to attack legs of the pillagers), and independently a separate exit (a stairway?) leading to the surface a good distance from the farm, and basic comforts like a bed to set your spawn, extra chests to store surplus goods, and a lava disposal chute to burn tons of crossbows. The kill chamber should look like this: 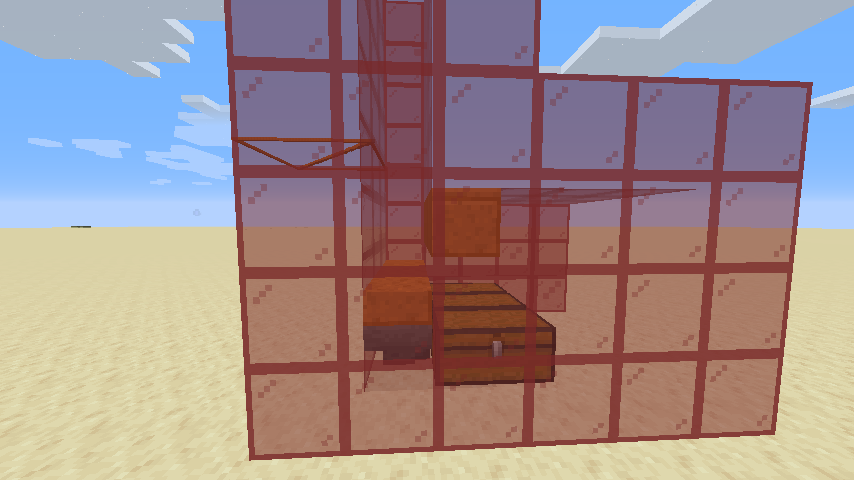 (the red glass represents native rock surrounding your kill chamber, in which you dig it).

Finally, you need means to get rid of ravagers, which won't fit into the kill hole. We need to suspend a single lava block 2 blocks above the center in a "bowl" of intangible fire-proof blocks. The "cheaper" approach is to build the structure of signs - it's an eyesore but works: 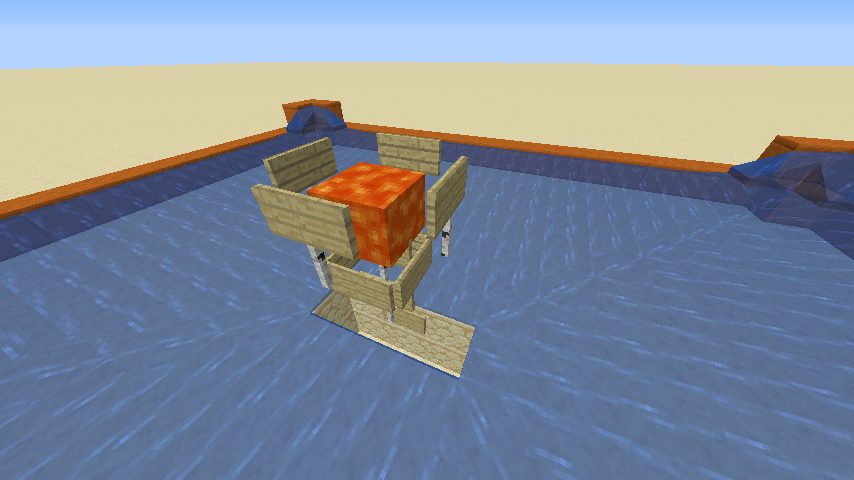 (if you have trouble understanding what you see, it's topologically equivalent to this structure - except with wonky alignment of signs stacked on top of more signs.) 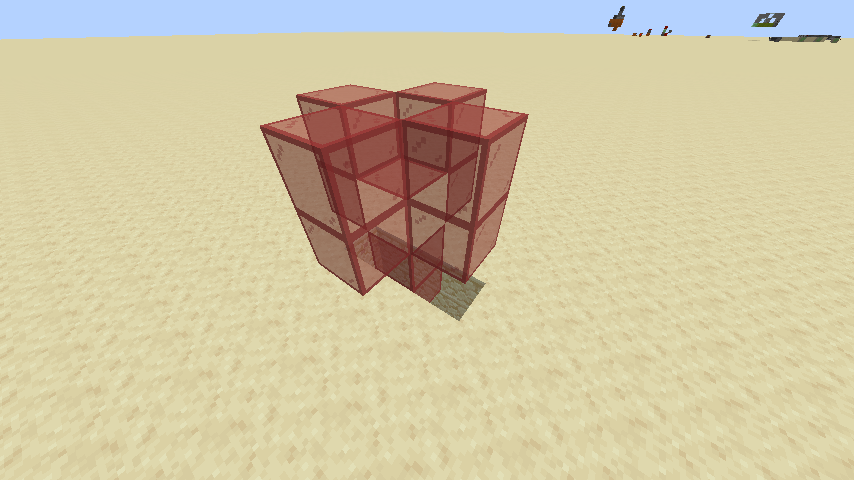 A much neater and easier approach is to use open fence gates made off giant Nether fungus stems (Warped or Crimson) - they are fireproof, and when open, intangible, and don't need supporting blocks. 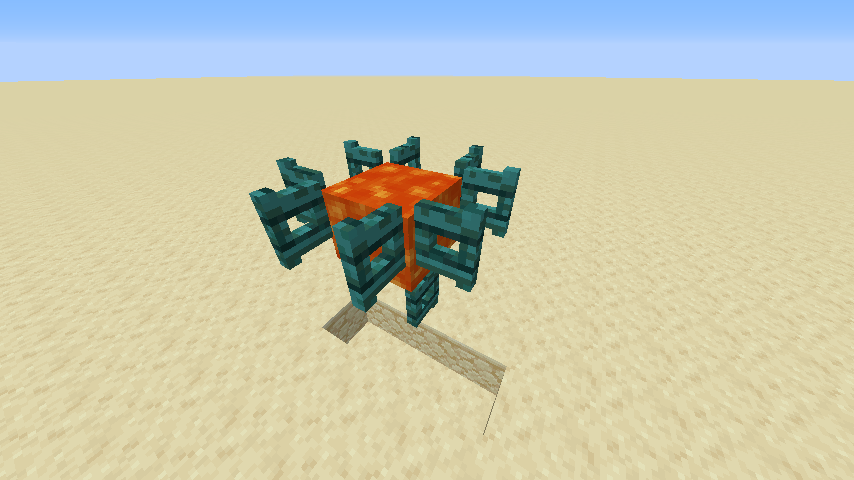 (there is 1 block of gap between the bottom fence gate and the opening of the kill hole. In other words, a typical 2 blocks tall pillager will fall into the hole without burning its head. The huge ravager won't.)

After you're done, get bad omen, visit your 1-villager village, enter the kill chamber through your back entrance, then swing your sword at legs of everything that drops in until the raid has ended.

Credit for this simple raid farm concept goes to Mysticat, he also provides a block-by-block tutorial of a very similar build.

And if that is not enough for you - you may look into stacked raid farms; ones that manipulate what the game understands as villages, to turn a single bad omen into hundreds or raids happening simultaneously. The builds are way too massive and complex for a regular Q&A site answer, the requirements and precision of the build are very stringent, some components (like nametagged evokers) are difficult to obtain and contain, but the rewards are immense. The CSS Covenant's stacked raid farm is currently the state-of-the-art example of this class. While creating this build takes a lot of work, I'd argue ability of afk player to defeat a couple raids per second makes this "the easiest way to defeat a raid".

You should barricade at least 2 villagers' homes (once they get in), and then tower up and make sure you have some water and food, use the good old shooting method. Make sure to have lots of arrows. Or if you prefer to fight with a sword, tower 4 blocks and attack. Use some lava. (this wont work on witches)

0
Are there raid farms that let the player kill ravagers?

3
When is enchanting tools a good ROI?
1
How do you find a village on survival?
6
What happened to my villagers?
1
What influence do experience points have on gameplay?
0
What does the “hero of the village enchainment do?
2
I accidentally changed my spawn location, and now I'm lost. How do I find my way back?
1
Bedrock edition raid farms
0
Are there raid farms that let the player kill ravagers?
1
How do I detect when a player triggers a raid?