Can the SSV Normandy SR-1 frigate get damaged in any way?

When compared to other available frigates in the game, the SSV Normandy SR-1 lacks a landing pad, meaning that the player can't board it like the regular support / explorer / combat / trade / industrial models. 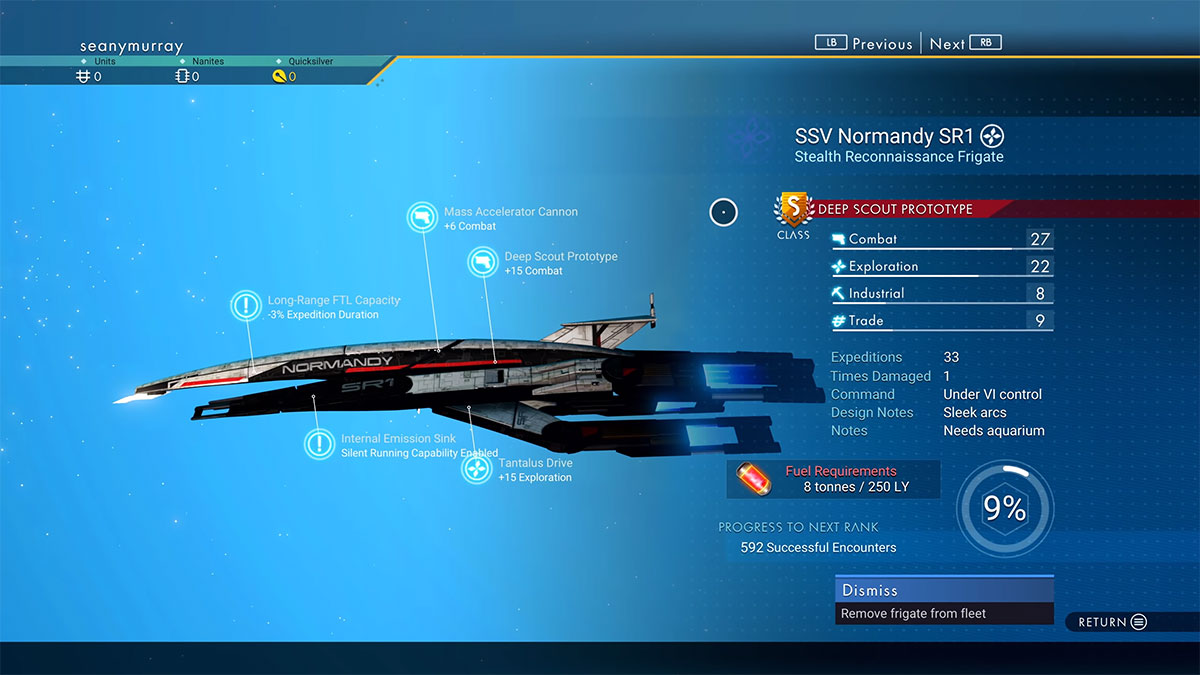 The Normandy seems to also lack a captain - when the player debriefs the SR-1 during an expedition, there is no captain hologram (probably because it wouldn't make sense for the SR-1 to have a Gek / Korvax / Vy'keen crew) and the only feedback seems to come from an A.I. voice.

Regular frigates can be damaged during missions. In that case the player is usually contacted on their starship communicator. Afterward, manual maintenance has to be performed, and this requires the player to land on the frigate and do the required repairs.

The fact that the player can't land on the Normandy seems to indicate that the player wouldn't be able to perform any repair operation should it get damaged. The game doesn't mentions this directly at anytime, but does this mean that the SSV Normandy SR-1 has the hidden perk of being unable to get damaged at all?

NOTICE: Erik pointed out in the comments that the "Times damaged" stats reports "1" in the screen. While it is true that the stat does indeed increase any time a frigate is repaired, frigates seem to start with random numbers on that stat (as in, the initial value is also procedurally generated). The Normandy specifically starts with "1", so the screen doesn't seem to indicate it was repaired "in game". More probably, the "one time damaged" stat is a somehow hidden reference to the fact that the original SR1 should be crashed. At least... in Mass Effect.

18
What's the best way to analyze flying creatures?
13
How can I get an Atlas Pass?
7
Is there an easy way to get out of a cave?
7
Can we visit any star in No Man's Sky?
6
What is the easiest way to find a Crashed Ship?
13
Can you actually get to the center of the universe?
5
Did the Exosuit upgrade in the space stations get removed?
6
How do you get the recipe for projectile ammunition?
6
How to get more Salvaged Frigate Modules?
0
Any way to change my final goal? (Spoilers)