What are the limitations of decreasing my world level?

I may choose to decrease my world level from 8 to 7, but the setting would lock for 24 hours. After that, can I then reduce my world level further? And if I do that, do I lose access to the domains that I initially unlocked by increasing my world level or will I only gain worse rewards at the rate that the world level initially increased them?

No, you can't drop any further. The world level change feature only allows a player to drop their world level by one. Dropping it multiple times is not allowed.

First, let's look at the Special Program stream for 1.4. 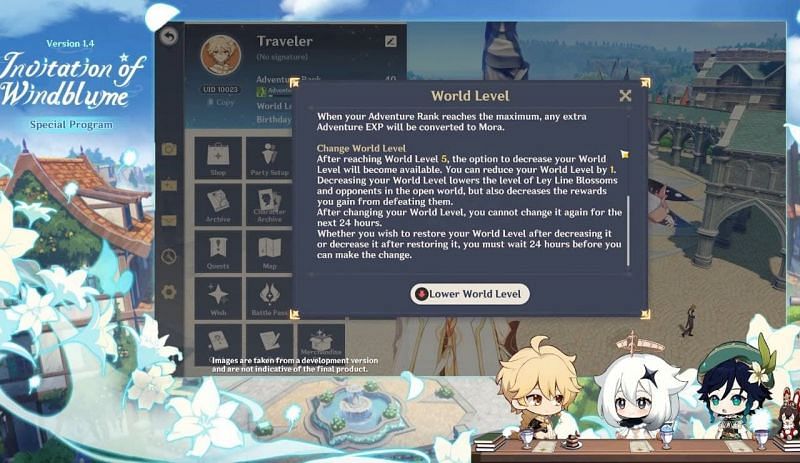 As you can see in the picture, the player here has never decreased their WL. Hence, they get only an option: Lower World Level.

If you then wait 24 hours and return to the menu... 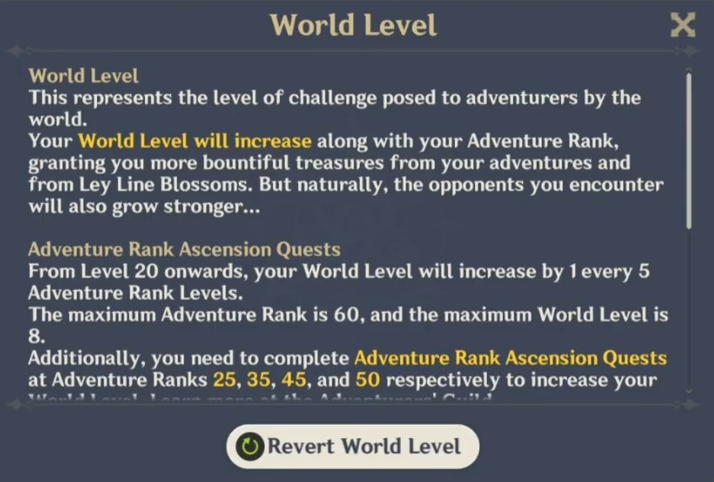 You aren't given the option to further drop the World Level, only to restore it.

Now: why is the system built this way?

With one odd exception at AR 50 world level increase alternates between an automatic increase, then a quest-gated one, then automatic again and so on.
What does this mean? Since Ascensions Quest also lock your adventurer rank until you complete them (for example, your AR can't go past 25 without completing Ascension Quest 1 but you can still get Adventure Experience over your current cap) if you delay on completing the Ascension Quest you can easily get to the point where as soon as you complete it your stored experience will make you jump multiple AR levels in a row. In the worst case this can take you straight to the next cap with a full 10 level AR increase. Basically that means that completing an Ascension Quest has the potential to increase your WL BY TWO because for example you just jumped from AR 35 to 45.

The World Level drop feature, proposed by many players in the surveys before getting implemented, probably aims at correcting this specific issue (it would have been harder to retroactively gate every WL increase with a quest - and also it would have meant that old players never got the primogems rewards for the new quests). Now, the real question is: why the system needs WL 5? On paper, it is quite easy to jump from WL 2 to 4 (AR 25 to 35) too.... probably, whoever designed the feature though that the difficulty spike was still manageable.

As for the other side question, as far as I know decreasing the WL does not influence unlocked Domains in any way. Your AR stays the same so you can still access any domain you would be able to at your current AR. Notice that Domains prices and monster levels are based on the selected level of the Domain, so that WON'T scale to your lowered WL since... domains drops weren't never scaled to the WL in the first place. A special notice though should be given to world bosses that are fought outside a domain (and therefore don't have a level selection like Stormterror Trounce Domain)- especially the weekly ones like Andarius. Andarius and the others DO scale to the current WL, so yes, the rewards you will get from them will be of a lower quality. Basically assume that any open world Ley Line Blossom is scaled.

In case you are interested, here are some further proofs that Domains prizes wouldn't scale down. 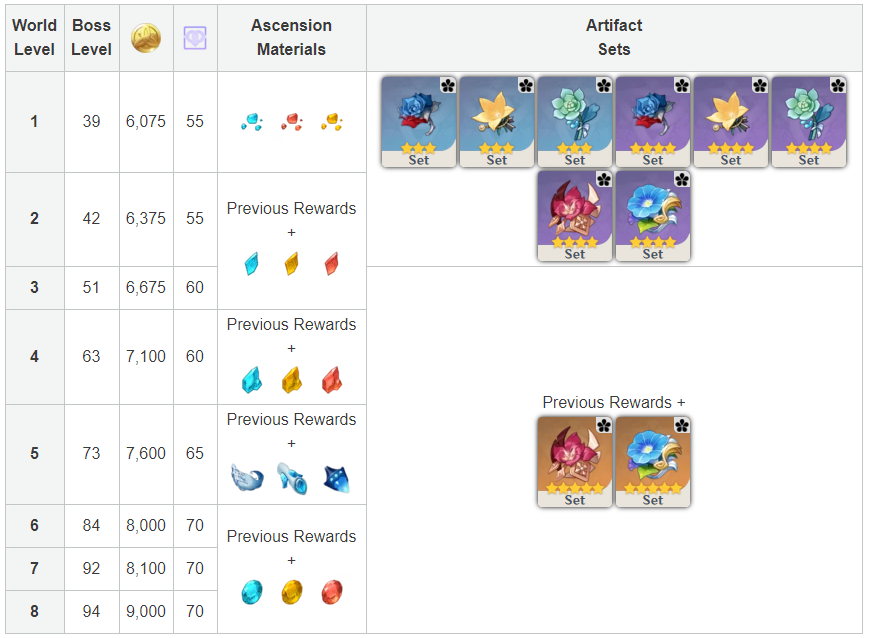 The above table was taken from the wiki. As you can see the drops directly depend on the WL. That means that if for example your current WL is 5 and you drop to 4, you would no longer be able to get the Ring / Tail / Spirit Locket drops.

If you compare that to a Domain drop table: 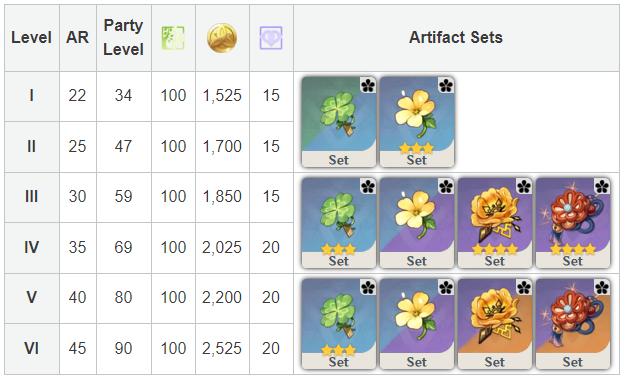 you can clearly notice that the Domain drops are only based on the Domain level instead. This means that in the above example as long as you are able to complete the lev 5 Domain you would still be able to get an Archaic / Bolide gold artifact no mater what your current WL is.

Basically, it seems that the Domain unlock feature only exist to prevent low AR player to be able to complete high level domains in co-op, since they can't join higher WL world and even if an higher level player joins them , they wouldn't be able to play difficulty levels that they haven't "unlocked" yet.