Why are mammoths so much harder to kill than dragons?

In Skyrim, I noticed that it is much much harder to kill a mammoth than it is to kill a dragon. Why is this? Am I just bad at Skyrim, or is it like this for everyone?

Enemies in Skyrim are, within certain bounds, adjusted to your own level. So the first dragons you meet will likely be pretty low level, as you're probably still at a very early level yourself.

The giants are one of the enemies that are present very early, but they don't adjust down to your early levels. They always have a certain minimum level, if you meet them early in the game they will be probably tens of levels above you.

The first giant I met killed me with one hit, flinging me high up in the air. Now at around level 40 I can kill a giant with 2-4 hits of my daedric mace.

The dragons are part of the main quest, they are more closely adjusted to your level as the developers also had to expect some people directly starting with the main quest, not earning levels before that with side quests. The giants are passive, you can avoid them pretty easily. So having them far above your level doesn't stop your progress at all. 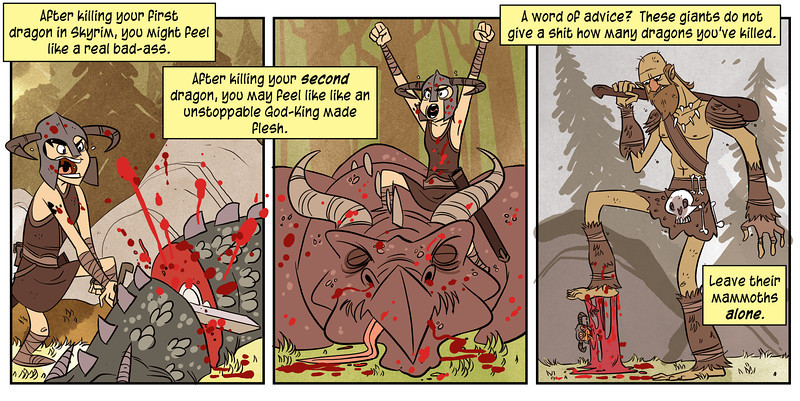 6
Why can't I kill any escorts?
24
Can you obtain a mammoth tusk without fighting a giant?
1
Killing a dragon with a single Dragonrend shout?
6
Can NPCs kill dragons? How to avoid it?
6
Which followers are a different level than the Dragonborn?
21
Why are coins called Septims by NPCs in Skyrim?