How can I tell a player scav from a bot scav?

In Escape from Tarkov player scavs have the ability to loot while bot scavs do not. When trying engage in PVP the ideal target would be a poorly-armed player scav, as they would have gathered various trinkets which could be looted after they're killed. Bot scavs have nearly nothing, and it is rarely worth the effort to engage them outside of quests.

Is there any way to tell a player from a bot when they both use the same character model? Likewise, when killed by a scav is there a way I can tell if that was a player or a bot?

From what I've seen, the only way to really tell is their movement. The developers of the game made it harder when they added the ability for them to sprint, eat food, lean, etc, but as you play, you'll be able to still tell an AI from a player scav over time. AI scav will still sit in one position for a number of seconds, which could be a giveaway. Most player scavs like to keep moving, but it's not out of the realm of possibilities for a player scav to imitate an AI one.

Probably the biggest give away is their voice lines. Most player scavs don't use voice lines often, while AI ones will periodically say something. Another potential giveaway is if you see scavs fighting a scav (or what you think is a scav if you aren't sure). This usually means that a player scav killed an AI scav around other AI scavs, and now they are hostile towards the player.

You can tell if the scav that killed you was a player or not if the report player icon is present in the "Raid Ended" screen after dying. If it was an AI scav, the icon won't be there: 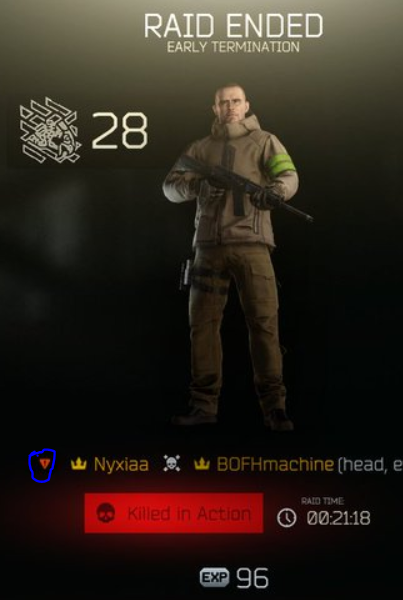 You have to rely on your own experience to discern players from bots. The developers will try to confuse players about this the most they can. For example with a recent update, bots scavs can now pick another weapon on corpses, wiggle back at players. They continuously add AI cases that emules how players scavs routinely behaves.

But after a while, you understand that most players scavs will shoot you on sight.

When someone does this, you are looking at a human player:

When someone does this, he is likely trying to let you know he is aware you are watching and may want to either cooperate or bait you:

While we can expect some or all of these distinguishing behaviours will be patched in the future, these are currently giveaways you are looking at a bot:

I have yet to see an AI Scav pick up & equip up an armband - but lootable armbands are rare and if you see one of those, it is much more likely you are watching a PMC trying to pass as a Scav.