This new Season of the Splicer sidearm is in the top slot, the 'kinetic slot', but is a Stasis weapon. This means it deals Stasis damage and and counts towards kills with Stasis.

However, as it has an energy type, just like Solar, Arc and Void. Does this weapon count as an Energy Weapon for bounties or Exotics which specify energy weapon kills.

Energy weapon kills grant Death Throes, which provides a bonus to the damage of your grenades and grants you grenade energy. When you have Death Throes and throw a grenade, nearby allies gain greatly increased grenade regeneration for a short time.

The bounties available today seemed perfect for testing this out, so I picked up 2 bounties from Shaw Han and one from Zavala: 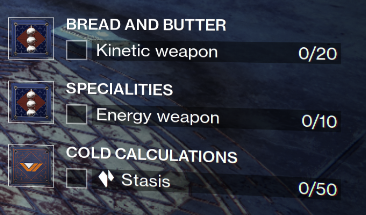 Defeat combatants in the Cosmodrome using any Kinetic weapon.

Kinetic weapons do not have an element associated with them.

Defeat combatants in the Cosmodrome with any Energy weapon.

Energy weapons have an element associated with them. Hitting combatant shields that match the weapon's element will deal bonus damage and cause an elemental explosion.

I then loaded into the Devil's Lair strike in the Cosmodrome and tried my absolute hardest to progress the energy weapon kills bounty with Cryosthesia.

A normal kill with the weapon progressed the kinetic weapon kills bounty and the stasis bounty, but not the energy weapon bounty. Not sure how to embed video, so here is a link to a clip of the bounty progression after the first such kill.

I froze the next target, then killed it with Cryosthesia (even though a Hive Knight really really didn't want me to). This progressed my kinetic weapon kills bounty by +1, and the stasis kill bounty by +3 (possibly due to stacking the events "stasis kill" with the weapon and a "combatant frozen with stasis" kill, since the bounty has multiple different conditions for progression and I don't know how they're weighted). The energy weapon bounty never progressed.

It doesn't seem possible to kill anything with just the Cryosthesia freeze, since neither the stasis freeze nor the opponent breaking free deals any damage at all, so I believe normal kill or freeze-then-normal-kill are the only options here, and neither count as an energy weapon kill. Both options count as both a kinetic weapon kill and a stasis kill.

The short answer is No. The weapon is in the kinetic slot. Stasis is a kinetic type, not an energy type.

7
What does the flashing ghost icon mean?
5
How to determine if it is a kinetic, energy or power weapon?
3
How does exotic weapon quest scaling work?
3
How is progress towards the Moments of Triumph trackers calculated?
6
How many kills does it take to unlock new subclass abilities?
18
How does Destiny 2 save?
3
What is the weapon masterwork progression?
3
What does the Drifter use motes for?
3
Best Way To Farm Shotgun Kills For New Light Players?
3
How does Armamentarium interact with Surplus?