I've been playing Pokémon GO for a few months now. I live in a major metropolitan area in the US, and pretty much since I started I have 4-5 PokéStop in range of me when I'm sitting in my apartment.

In the past two weeks, I got super busy and didn't log in. Today, when I logged in, all the same PokéStops are present, my avatar is in the same location, but I'm only "in range" of two of the PokéStops.

Has the algorithm Niantic uses to detect if you're in range of a PokéStop changed? Does this happen often? (I've only been playing since February, and this is the first time for me.)

I took a screenshot to demonstrate. In the below screenshot the two PokéStops highlighted in green are the only ones that I am now "in range" of. (For some reason the one on the left is out of range at the moment.) The two circled in red were previously consistently in range as well. The one in yellow was sometimes in range if there was some GPS drift.

Niantic has reverted their plans again. According to their Twitter post the default distance is 80 meters from now on.

You were just used to the COVID-19 bonuses.

According to this article Niantic started to revert some of the changes made to take lockdowns and curfews into account. Since these are no longer a thing Niantic has decided to change some interaction ranges again in select countries (including the US). 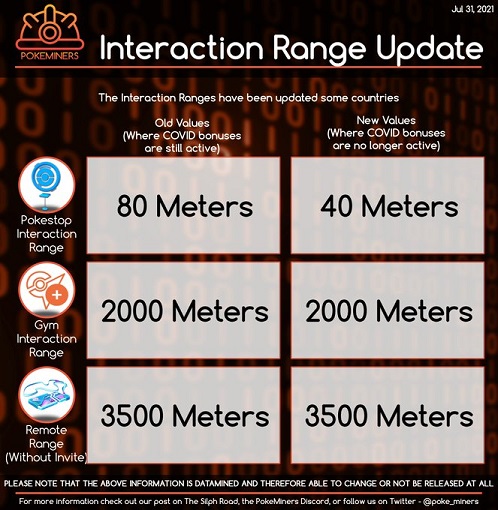 66
How does egg hatching distance relate to the hatched Pokémon?
1
Why has my Avatar in Pokémon GO disappeared? My accounts are intact
3
Pokémon Go: Thrown back to gym menu as soon as countdown ends
2
What does the distance to the Pokémon change?
12
Is total distance walked specific to a single Pokémon, or to a species of Pokémon?
9
Which Pokémon had their CP changed?
6
What does the Pokémon Go Plus use to track distance walked?