I gave up on this Minesweeper board. Is there a correct move that makes this solveable with certainty?

I have stared at this board for way too long and can't figure out how to move on. 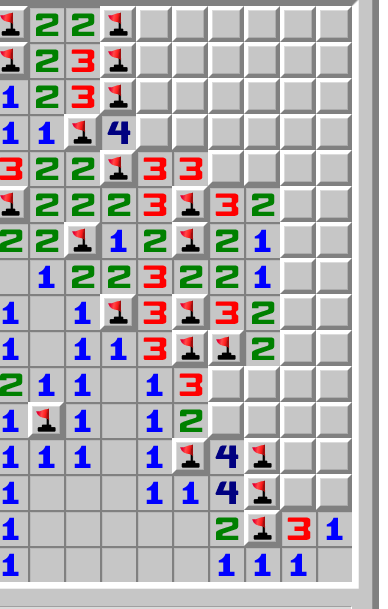 As far as I can tell, the main problem is the bottom part with the double stacked '4'. It seems to me that I have multiple possible solutions there that would all work out, so I can't decide for certainty which one is the correct one.

I've been looking at this for several minutes, and I can't figure out any safe move to do.

I feel the only solution left is to guess, and the less dangerous move should be here: 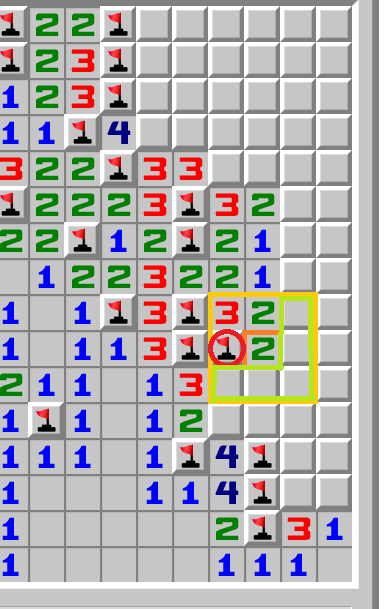 That 2 already has an adjacent mine, so those 5 tiles in the green L-reversed shape only hide a single mine. This means that you, more or less, have 80% chance to do a safe move and get an empty slot. Hopefully, with another hint to let you progress.

I'll probably avoid the left-most tile, since you should have 50-50 chance to hit the mine there.

Edit after OP comment:
Another possible move is to choose one of the white tiles on the right, and since we don't know how many mines were remaining, let's use the default numbers:

Which is pretty much the same chance of choosing a tile from the area highlighted in the above image.

As others have said, you’re right: multiple solutions are possible, and so there is nothing to do here but guess. Pinckerman’s answer points out a range of five squares that, in theory, are equally likely to hold a mine, giving you an 80% chance of survival. Here’s some more analysis of those possibilities.

I’ve allocated each of the five squares a coloured dot—if that square is a mine, then so are the other squares marked with the same dot. As you can see, there are some squares that should definitely be avoided, as they hold mines in three or even four of the five scenarios! (Squares not marked with any dots are independent of these five possibilities.)

However, it’s only an assumption to say that each of the five scenarios is equally likely. After all, from the point of view of the “3” in the lower left of my image, the two squares to the right are equally likely (50%–50%) to hold a mine… but the above analysis suggests that it’s actually 20%–80%. It makes sense that other factors might likewise change our risk assessment of the five squares to no longer be equally likely.

One possible factor is the number of mines remaining to be found. The purple, green, and blue scenarios each flag four mines, while red and orange only flag three. Other areas in your screenshot (mostly cropped from mine) give us three to five other mines. Does this alter the probability of any given outcome? I dunno!

In the unlikely scenario that there are exactly six mines (the bare minimum) left to be flagged, it may in fact be solvable without guessing. But I doubt it.

…And I was right to doubt it. As NotThatGuy points out, there is no situation in which the two lowest squares can be anything but a fifty-fifty guess.

A lot of the existing answers consider strictly the probability of any given cell being a mine, but seem to be missing what happens after you make a guess. You may be forced to make additional guesses, which would decrease your chances of winning quite significantly.

Of course a lot of this will depend on what you actually find, but there are some cells that seem promising than others. Below is the best I can come up with.

I'm ignoring how many mines are left (which also wasn't provided), but this can also be an important consideration. 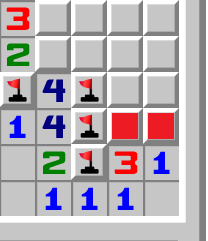 You should pick either of the bottom-most 2 cells.

This may not seem like a great choice as it may not be the least likely to be a mine and it's not that likely to open up the board.

But nothing else being revealed will give you any information whatsoever about which of those cells you should pick, so it's a guess you're going to need to make regardless. This is always the case when you have 2 neighbouring cells containing only 1 mine with 3 mines (or a wall) on both sides.

This is objectively the best guess you can make if your goal to win.

If you need to make another guess, I'll probably suggest this: 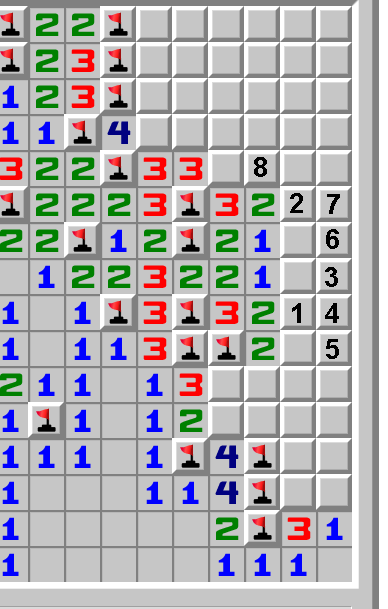 Start off opening the cell marked "1". This should have about a 1-in-3 chance of being a mine (depending on how you calculate it, of course).

If "7" is safe, this combined with "2" will tell us whether 8 is a mine, which can lead to opening up the whole upper area.

Having things work out exactly like this is fairly unlikely, but it seems much more promising than any other choice, which involves going much more into the unknown. Having that wall right next to you is good and bad: it means there aren't any potential mines in that direction, so the adjacent cells have fewer possible values, but you're also limited in how much you can open up, since you can't expand in that way.

Unless you have a more compelling guess, I'd generally recommend making a guess somewhere in a straight line next to open cells (the longer the line the better). There can be some guaranteed chains (like "2" above) and 1 cell can often give information about multiple cells behind it (like "3", "4" and "5" above).

If I need to make another guess, I may go with the cell below "1", since if the cell above "1" is safe, the 3 cells in front of the 3 below would all need to be safe, which just doesn't seem particularly likely (which may also support the above guess).

The rim consists of 4 isolated groups not affecting mine placements within other groups.

Of those, 3 are simple dipoles.

In the more complex group, all five second mine locations for the key "2" results in valid boards, with no overlap between them.

Since there are three groups with varying possible mine density (two 2-1 dipoles, one complex 3-4), the board is only deterministic if the number of remaining mines is at its minimum, in this case exactly six mines.

This is a breakdown of the non-trivial possible mine patterns. A given pattern family has a shape, and each pattern has a colour. 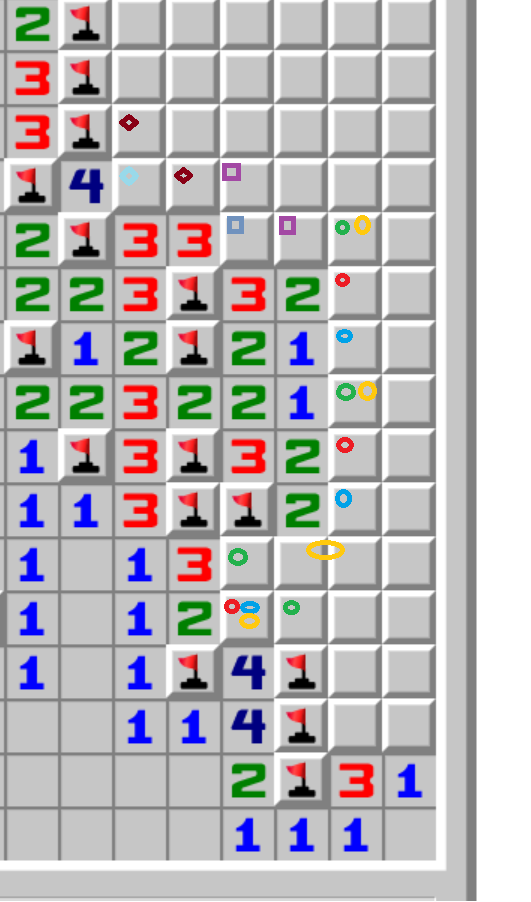 There is no deterministic way to find the next spot.

But we can seek to maximize information at minimal risk.

By far the most likely place for there to be a mine is between that 2 and 4 near the bottom. Assume there is a mine there. Now click on the 2 green circles next to it.

If red, blue or either of the orange circles are the real mine pattern, we live. And we get information about the pair of orange circles under the 2, and can start advancing, and we get to clear more territory regardless of what the actual pattern is. We could get confused between red, blue and a rightmost orange, depending on where other unrevealed mines are.

If green was the actual solution, we die. Too bad, so sad.

It is possible that one of the other red/blue cells is less likely to have a mine than those 2 green ones. But the fact you can clear 2 cells and mark a mine and either mark another cell (solving everything) or clear another cell if you make this guess makes it good information to risk choice.

71
What do I do when two squares are equally valid?
15
Best move when they are no more certain moves left

83
Is this minesweeper board inconsistent?