Resources packs are missing from the DLC page in Dead Space 3. How can I spend my ration seals?

As you know, the game has a mechanism that allows you to earn ration seals. These seals can then be used to buy resources packs from within the game, which give the player with some resources and some "MK-V" parts to upgrade your weapons. The advantage being that the "MK-V" parts, unlike their normal counterparts, have extra stats bonus. 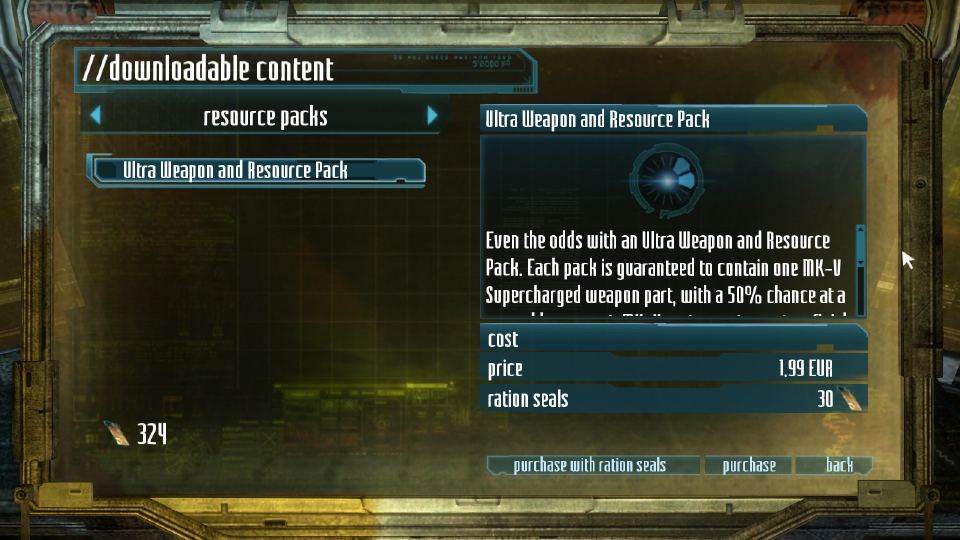 However, many PC players (both on Steam and off Steam) have experienced problems with the ration seals: they can't spend them.

They're supposed to be purchasable with real money or with ration seals. But for some reasons, for many players, the ration seals don't appear among the list of DLCs anymore.

Is there a way to fix this issue and spend ration seals to purchase resources packs as intended?

UPDATE 6th September 2022: According to this post, the following solution doesn't work anymore, so ration seals can no longer be spent.

I just now tested this, and it looks like my solution no longer works. Might be that they decided to remove it completely, or their related servers are down/broken.

TL;DR: You need a computer with Windows 8.1 or higher in order to perform the solution below. After you're done, you can keep playing on whatever operating system you usually use.

While I was searching up some information, I stumbled on some reasons as to why it might be happening:

Some users suggested some solutions over there on EA forums, one of which worked for me.

Before doing the solution, make sure to:

After making sure you have the game installed with all your saves on a computer with Windows 8.1 or higher, do the following:

25
How can I fix the mouse lag on the PC version of Dead Space?
9
How can I change the browser home page in Steam?
6
Can I use DLC from Origin with the base game from Steam?
4
How to unlock all the achievements
5
How can I remove older items from the downloads page, and display newer ones?
3
How to defeat the boss in chapter 9 of Dead Space 3?
1
Are the Dead Space 3 collector trophies dependent on optional side missions?
4
How did I just build the Shootbanger in Dead Space 3 for zero cost?
2
In Dead Space 3, what are the possible reasons for a Scavenger bot to disappear?