My main team is Keqing, Beidou, Chongyun and Barbara, so mostly Electro.

When I am doing a quest and the dialog leads me to fighting the Fatui, often one of these chaps is in the group. 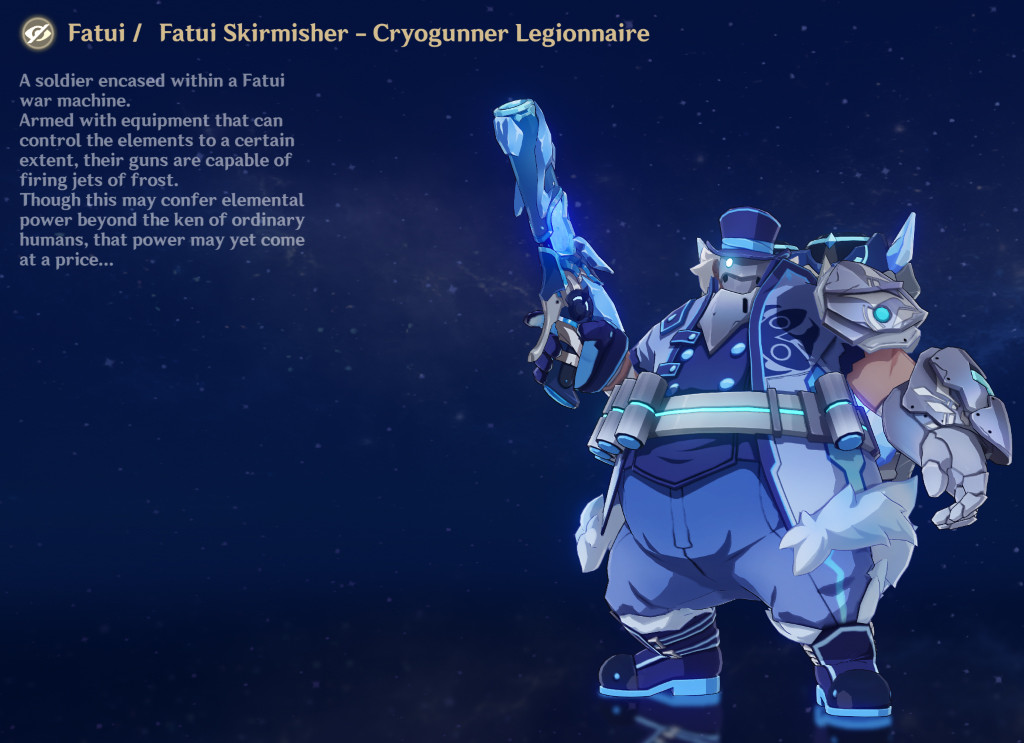 It's my understanding the best way to break the cryo shield is to cause a reaction with it, however, Hydro and Electro do cause reactions but don't seem to take the shield away.

This means I have to just tank the enemy with food and attack it with physical damage until it dies. I am in combat so I'm unable to swap my team members.

Do these enemies really require having a Pyro hero in your team? Or is the only real option I have to waypoint away, change my team and return to the area?

Sadly, the fastest reaction to destroy the Cryogunner shield is indeed Pyro. So, if you don't have Pyro at hand, either you find a way to be creative or you have to resort to slowly abuse reactions that will do thick damage past the shield.

One option that comes to mind is to use some external source of Pyro damage. If for example you can have another enemy ignite some grass, then swirl could do wonders - but it does require some other enemy that uses Pyro. Another option is to use attacks that can partially bypass shields (Xiao Bane of All Evil comes to mind, Jean Gale Blaze can also slowly work), but those are also not always available. Other than that... there aren't many other options right now.

Some players currently believe that the missing Dendro element will be tied to poison/damage over time and that could mean it will bypass shields somehow (and considering the new mechanics that bypass player shields in Abyss that could make sense) but until then, your best option is sadly to bail out and return with a Pyro character if you can.

Further clarification.
To really understand how shields work, you can refer to the wiki here. Over-simplified version follows.

There are three types of shields:

A shield can be reduced either by damage or elemental reactions. Both scale with a factor that is dependent on the shield element and mob type.

Fatui Skirmisher shields are considered "Armor" shields (with some further differences for the Anemoboxer) - this is why you can cause damage to their hp even when the shield is on. In most cases Armor shields have a damage ratio of 0, meaning that raw damage does not decrease the shield gauge.

For this reason damage won't reduce a Cryogunner shield gauge, leaving reactions as the only way to counter the shield.

With that said, let's look at the standard elemental damage coefficient table.

Again, skipping the actual formula, this should easily show that to destroy a Pyro shield Hydro is the best option, followed by Electro (again, ignoring other factors like application speed and so on).

Problem is that while basically every enemy shield uses this table, there are exceptions. And Skirmisher are one of those. 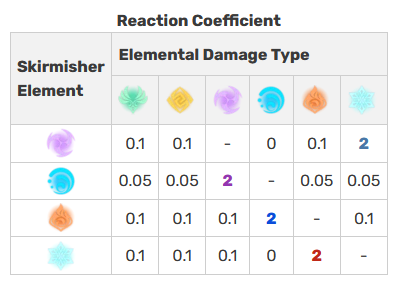 And here is the issue I mentioned. Skirmisher reaction coefficient is 2 for a specific element and "almost zero" for every other option. So, while for regular shields the max difference is a 4:1 ratio (Pyro VS Anemo on a Cryo shield)... for the Fatui the ratio can be as bad as 40:1 (Pyro vs anything else on the same Cryo shield) - ten times as bad. This basically means that with the sole exception of a single, working element, most reaction are basically "useless" at removing the shield.

I hate fighting these guys in Inuzama because it'll be raining half the time which applies wet effect to my entire team and causes them to be permanently frozen by this guy...

Anyway, the first thing you wanna do when engaging the Fatui is to defeat the hydrogunner first because he can heal the others.

Then next for the cryogunner, obviously pyro is the most effective against his shields but if you don't have a good pyro you can also try geo. If you have a geo traveler or zhongli, you can generate a constant shield and just keep hitting him until he eventually dies.

If you insist on keeping your current team line up, then Beidou will be your best bet (I also use Beidou in my team as a sub-dps tank, so I would know haha). When he starts his frost attack, run away first and count to about 3 seconds, then approach him and activate Beidou's elemental skill. Try to time it so you get a max damage perfect parry. Then feel free to rough him up a little, but start running again when he readies his gun. Beidou's perfect parries deal so much damage that you should be able to kill him with a few cycles of the above steps. Most likely, he'll die before his shield goes down haha.

Despite the things SPArcheon have said. Keep in mind that Fatui Skirmisher's shield is different than other shield. Their shield can only be destroy by applying special element or deal a huge amount of damage(don't have a specific number), which is more than the HP of the Fatui. Pyro shield can be destroy by applying Hydro, Cryo by Pyro, Electro by Cryo, Hydro by Electro.

Other shield can be destroy by applying any of the reactions. You could think of that, the shield is a compose of elements. You could deal damage and break the shield, or you could apply reactions, because reactions will consume elements.

By the way, someone have tested, if you could freeze the one with Cryo shield(which normally can't be freeze by apply Hydro), and use claymore or Charge attack to cause Shatter, it will be even faster than using Pyro(If you could keep the rate of frozen) , because Shatter will consume the Cryo element in the shield(It doesn't work on Cryogunner, as I have said in earlier section.)

0
Elements to bring down Abyss Lector and Abyss Herald shields

4
What are the fastest ways to take down Abyss Mage and Fatui shields?
7
How often do chests respawn?
1
How do you fight against Geovishap Hatchlings?
7
How long can you ignore Paimon?
6
How do you unlock the craftable Inazuma weapons?
5
How does Genshin Impact judge area completion percentage?
11
How can I get... just a little bit higher?
7
How do elemental shields work?
3
How can I stop a Ruin Guard's bayblade attack?