Is there a way to light stuff on fire without attacking it?

I'm playing Assassin's Creed: Odyssey (PC via Steam, all DLC). When I equip my torch, I know I can light stuff on fire by attacking it. Is there another way to do it?

When I played Origins, there were certain objects that Bayek would just light if you stood next to them holding a torch. Braziers (regular ones not the alarm ones), sconces, mounted torches, that sort of thing -- simply hold the torch, stand close enough, and Bayek would reach out and light them. I found this very useful not just because I am a pyromaniac and I like setting things on fire, but also because I could use it to track where I'd been. For example, if I was sneaking through a pyramid, I'd light all braziers as I went down a corridor, so if I had to backtrack to go down different side passages I'd always be able to tell where I'd been previously.

Example -- the brazier on the right of this screenshot snippet was lit by standing near it holding a torch. 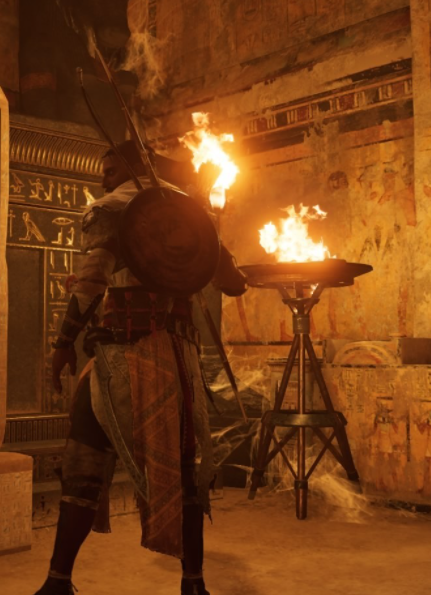 When I have Kassandra hold the torch and stand close to an unlit brazier ... well nothing happens. Standing or crouching, she makes no move to light the brazier. The only way I've figured out to do this is to actually "attack" the brazier with the torch. Unfortunately, Kassandra's torch attack is a wide arching swing, so we usually end up not only lighting the brazier, but also the wall, the roof, innocent civilians, and sometimes ourselves on fire as well.

Fire arrows are, of course, an alternative ... but that seems a waste of arrows. Other than these two methods (torch attack and fire arrows), is there another simpler/less wasteful way to light things on fire? (I'm specifically interested in lighting things like non-alarm braziers on fire; the torch attack/fire arrow is fine for destroying military supplies on missions.)

Comparative example: Kassandra can stand here with her torch next to this brazier all day and will never just light it. 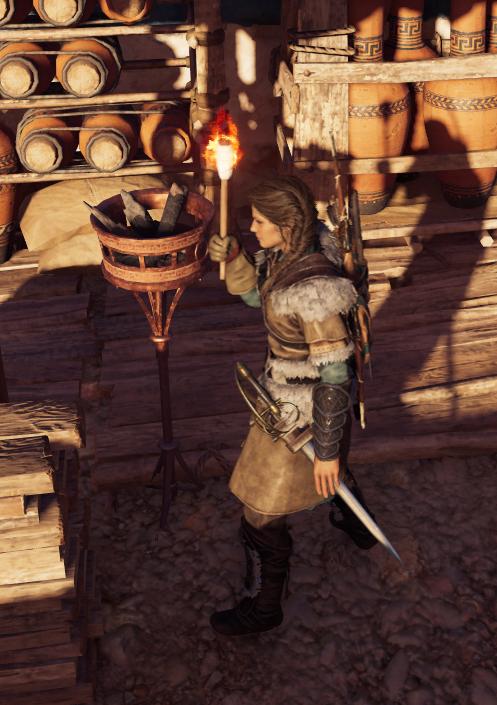 I don't know if you'd count this as attacking, but you can throw torches in addition to swinging them. Right click to aim when holding the torch, left click to throw.

This gives you better precision than attacking and, unlike fire arrows, doesn't cost anything.

You can also use this technique to create a light source down a corridor, or, apparently, to light arrows on fire (which I haven't tried out myself).