How do elemental shields work?

In Genshin Impact you can pick up crystals that will generate an elemental shield around your character like this: 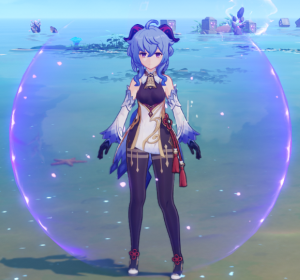 I find these pretty handy when fighting certain enemies but the in-game guide doesn't really explain how they work in detail - specifically:

How strong are the cristallize shields and how does the type affect the damage?

Shields gained from picking up the Elemental Shards dropped by Crystallize reactions have shield health based on the level and Elemental Mastery of the character that triggered the reaction. These shields additionally have 250% effectiveness against elemental damage of the same element; in other words, they only take 40% as much damage when absorbing damage of their own element.

Base Crystallize Shield HP is only affected by the character level.

Further increased by Elemental Mastery(EM) with the given formula:

When the shield takes damage, the damage is scaled down based on the shield's elemental damage absorption bonuses and the active character's Shield Strength attribute.

If the damage exceeds the shield's health, the damage taken by character is the excess damage multiplied by the same shield bonus multipliers.

What happens if I pick up another shard?

Picking up a new shard simply replaces the old Cristallize-Shield with the new one. Only one cristallized shield may be active at a time. Multiple character shields may exist at the same time, just replacing itself (with Thoma as exception who may buff his own shield further). However, as stated by @SPArcheon in the comments, they take damage simultaneously.

Can I compare shields of different characters?

The shields of other characters such as Diona, Noelle and Zhongli simply got their own base HP and absorption. For a comparison of these, you can look up Shields/Comparison.

Credits go to Genshin Impact Fandom Wiki, where it's well explained in even further detail. All data for current Version 2.4.

Not the answer you're looking for? Browse other questions tagged genshin-impact .

4
What are the fastest ways to take down Abyss Mage and Fatui shields?
7
How often do chests respawn?
1
How do you fight against Geovishap Hatchlings?
7
How long can you ignore Paimon?
2
What is the difference between the various elemental symbols?
4
How to defeat a Fatui Skirmisher - Cryogunner Legionnaire?
5
How does Genshin Impact judge area completion percentage?
0
Elements to bring down Abyss Lector and Abyss Herald shields