How can I use High Templars effectively?

It seems that the High Templar is weaker in SC2, particularly, the storm's damage is weaker, the spell duration is quicker, and the AOE is smaller, than it was on SC1.

How can I use High Templars effectively in Starcraft 2, despite these changes?

The original question was more about the difference between High Templars in StarCraft 1 (:Broodwar) and StarCraft II and if the "new" version is weaker. I really want to adress this rather than the current "How to use effectively". Also because I find the change pretty interesting.

Ok, so far this does not look like a real difference?

In both games two High Templars can be morphed into an Archon without any special upgrades.

Feedback is an offensive spell cast by the Protoss High Templar. It is cast on an enemy spell caster (cannot be used on buildings), depleting the target's energy pool and dealing one point of damage for each energy lost. Feedback can only be cast on units with energy.

Dark Archons (morphed from 2 Dark Templars) used to have the Feedback spell in Starcraft 1.

In Brood War High Templars were useless (except for making archons) without any researches, but could learn 2 spells aswell:

Yeah... still looks pretty similar except I already have sentries for my hallucinations and can feedback w/o additional units and any upgrade cost. What you can tell me more??? Well then...

I haven't watched Brood War too much to know every little trick and usage of HTs in SC1 so maybe correct me or add sth. if you feel like.

Most of us should know the Mutalist Magic Box trick in SC2 (explanation video here), but something similar made caster control in Brood War so lovely. It means you could spread out your e.g. 4 templars, order them to cast Psi Storm once (1x hotkey + 1x click target position) and if done right they cast 4 storms that do not stack but are perfectly spread out and cover a pretty decent area. 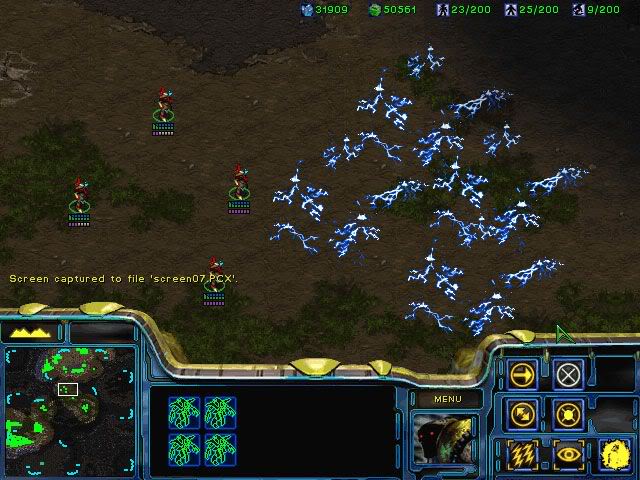 an example screen from a TeamLiquid.net Guide: The key to spread spells

Demonstration video right here. As far as I know this is not possible with the smart casting mechanics in SC2, although you can hold down the hotkey for a spell and click at the desired position - which may be more accurate.

Besides this, storms are considered to be stronger in SC:Brood War because it did more pure damage and units had generally fewer hit points. For example it was able to chase away a whole terran army (consisting of vultures (80hp) and tanks (140hp)).
Some people may think the removal of Khaydarin Amulet weakened the HT even more (in comparison to SC:BW), because if it was researched you could storm right after the unit was warped in - now you have to wait ~25seconds to do that.

Yeah, maybe the SC2 storm does less damage and units nowadays have more hit points, BUT:
Keep in mind SC:BW and SC2 are two different games with quite different mechanics and therefore the unitroles have changed a little bit. All in all our lovely High Templars have their importance in both games. Get them, use them, win with them.

And don't forget some support units because they are squishy ;p

If I find some more nice screenshots and/or guides for storm usage in both games I'll add them soon.

One way to make the storms more effective in SC2 is complimentary to the use of force fields. Since storm does damage over time, enemies can simply walk out of the way of it suffering only a part of its full potential damage. If you use force fields to split the enemy army in half (or even just throw them right behind their army) and then storm on them they will be forced to engage and take full damage from the storm. Another good thing is to use storm in choke points (like ramps) where the enemy units have to run right through it. 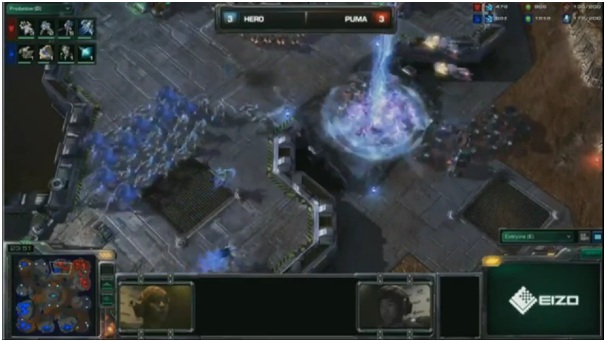 Players will often have a few templars flanking a zerg army if they have infestors (which are typically towards the back of a zerg army) and will be able to pick them off with feedback before the infestors can get off fungals or the zerg player will notice the templars coming in from the side.

Another use for storm is to take out a mineral line. Ever since the patch getting rid of the Khaydarin Amulet you are no longer able to warp in a templar with enough energy to perform a storm. Players have gotten around this by warping in 2 templars from a warp prism, loading them up into it, waiting until they have enough energy, then dropping in the enemy base. This is a very strong tactic since you can dismantle an entire mineral line with the 2 storms severely hindering your opponent's economy. Here's an example video of a perfect stormdrop by HerO.

If you have a mothership later in the game storms, along with archon toilet, can be very effective at damaging the entire army of your opponent. Casting storm shortly after vortexing the enemy army will cause it to hit almost everything that was just in the vortex. Cheat the storm towards the direction that their army came in from if your army is also in the vortex otherwise you will kill your own army too! An example video from Dreamhack Winter 2011 where HerO kills quite a few Broodlords this way

When used alongside the other spells available to protoss in SC2, storms can be very strong since you can effectively force the opponent to stay inside of them.

Note: Storms do not stack damage. That is to say that if you have 2 storms available and you cast them in the same spot one right after the other it will not do any more damage than if you were to cast a single storm. You need to remember to chain storms so as to cast a new storm once the previous one is about to run out.

Also remember to keep your templar spread out so they don't lose their energy to ghosts when playing PvT!

11
Psionic storms - how exactly do they work?
15
How should I effectively use Fungal Growth?
3
Looking for a Starcraft 2 Graphics Guide
12
How long is StarCraft 2's typical input delay compared to other competitive games?
5
How can I effectively use Tempests?
4
Is it possible to ask Starcraft II to use OpenGl instead of DirectX?
10
Do starcraft 2 professional players play with minimal visual settings
1
How to keep sentries and templars in the center of death balll?
3
How do I effectively use cloaked units?
5
Since when were carriers and mothership so good?