How can I get monsters to pick up and use attack wands?

Intelligent monsters in NetHack will typically use any carried attack wands instead of their melee attacks, even if the wand is weak and their melee attack is instadeath. Is there a good way to exploit this behavior by giving extremely dangerous monsters spare wands of magic missile?

Throwing the wand doesn't seem to work, as they just ignore the item that's now on their square. Dropping it on the floor and walking away sometimes works, but not other times, and I don't know what affects this. I also don't know if they would ever seek out wands on the floor, or if I have to get lucky with their natural movement and hope they walk over the item while chasing me.

I'm mostly asking about the endgame riders, if there's any special behavior involving them. The Wizard of Yendor would also be a good candidate, but I think his covetous nature would make giving him a wand too difficult. I'm also not positive it takes priority over spellcasting, which is the real danger for him.

According to the NetHack wiki, intelligent monsters should pick up and use charged attack wands. I just tested this in wizmode and it does work with the riders too. 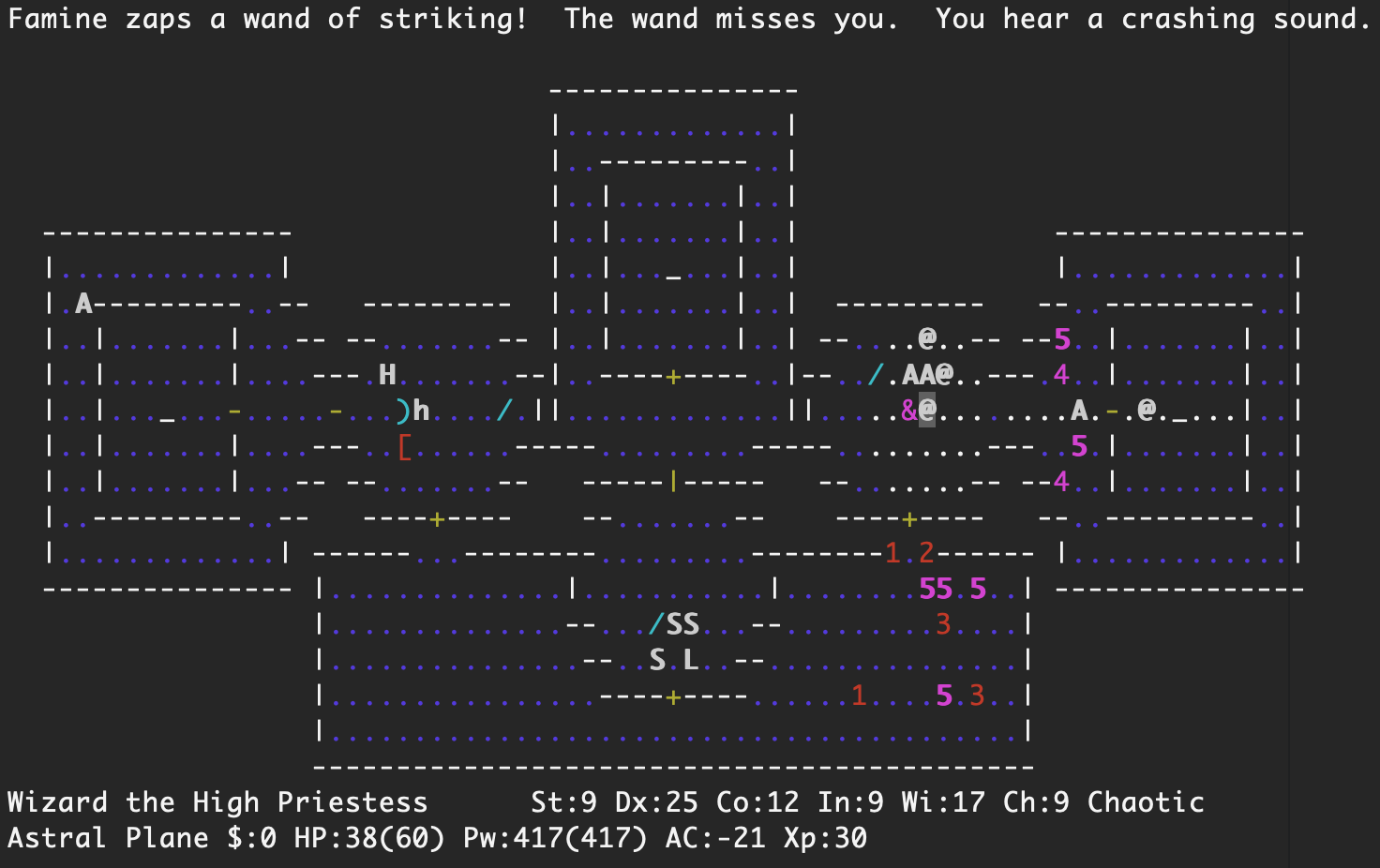 However, there are a couple of practical limitations to using this method to deal with the riders. One is that the priests and the angels on the Astral Plane level also love to pick up wands, and will often grab them before the riders do.

In fact, whereas the riders seem to ignore wands unless they just happen to step on them on their way to the player, priests and angels (and presumably other intelligent monsters) will actively seek them out within a radius of up to sqrt(5) blocks (i.e. up to a chess knight's move away), moving towards the wand as long as it's closer to them than the player is (and as long as they're not lined up with the player, as described below).

The other problem is that there's a deliberate check in the source code* that stops monsters from picking up items if they're "in combat", which basically means either adjacent to you or lined up orthogonally or diagonally so that they could throw something at you.** (It doesn't check whether the monster has something they could throw, just whether they could hit you if they did.)

Since the Astral Plane tends to be quite crowded, and since the riders normally charge straight at you (and will even displace other monsters to do so), it's quite hard to maneuver them into a position where they'll actually choose to stop and pick up items rather than attack you, at least not without clearing the area of all other enemies first. And if you can do that reliably, you can probably just run to the altar and ascend anyway.

*) I'm pretty sure that this is a new thing in NetHack 3.6. I remember that in earlier versions you could quite easily get monsters stuck in a loop where you'd e.g. throw a dagger at the monster and it would spend its next turn picking up the dagger you just threw, letting you throw another dagger on your own turn and so on, until the monster died with half a dozen daggers in its inventory. The "in line" check was presumably added to prevent that from happening; the fact that it also makes it harder to trick monsters into picking up wands is probably just an unintentional side effect.

Not the answer you're looking for? Browse other questions tagged nethack .

8
Can I pick a lock on a shop "closed for inventory"?
6
What can I do with artifacts I don't plan to use?
7
How can I get an item from a peaceful monster without the murder penalty?
8
Can monsters hallucinate?
10
What is this large room with an assortment of monsters, a swarm of bees, and some items?
11
Beginning nethack, how to use bags
7
Can I identify rings similar to the way I can identify wands?
3
Can dragons use Unihorns to heal themselves?
3
Can/will a pet actually USE Jumping/Kicking/Waterwalk/Levitation Boots?
4
Can an orc get Sting or Orcrist as a sacrifice gift?