Which was the first game to use multiple Rock Paper Scissors mechanics?

There are many games that use a tactical or elemental Rock Paper Scissors mechanic. Some of them try to make things more interesting by modifying the mechanic, such as by changing the number of options or the relationships between them.

For example, from the mobile game Empires & Puzzles: 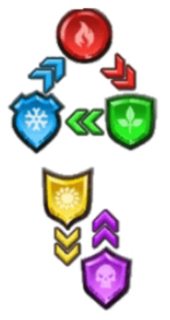 I do not consider Pokémon to be an example of this. There are 18 types and they cannot be divided into separate Rock Paper Scissors cycles.

Does anybody know the first game to implement a system of multiple Rock Paper Scissors mechanics?

There are many recent games using multiple Rock Paper Scissors mechanics, such as:

Fire > Earth > Thunder > Water then Dark - Light oppose each other

Probably (I can't find anything before) the first appearance of this mechaninc should be from Tales Series:

Fire, Ice, Wind, Earth, Lighting, and Water, in a cycle, then has Light and Dark, which were both strong against each other.

Introduces elements to the series. Elemental damage comes in four forms: neutral, weakness, resistance and absorption. There are degrees of resistance; the higher the resistance, the higher the chance to nullify the damage.
This system is also used in the PlayStation release of Tales of Destiny (1997)

Revolutionizes the system by reworking the concept of resistance. Resistance now means that the target takes decreased damage from the element rather than having a chance to nullify it. This system is then used in most games of the franchise.

I can't find any proof about Phantasia, but Dark and Light were already present in Destiny. The "elemental wheel" wasn't really changed in Eternia, only how resistance is managed.
So Tales of Destiny is my guess.

The answer above has mentioned a game from 1995, but it's unclear to me from the answer if it's exactly what you're describing.

In 1996 there was a relatively obscure MuD called Realms of Kaos that had a divinity system, whereby every player at character creation chose a divinity (fire, ice, night, earth, storm) and every monster in the game had a divinity too. You'd deal more damage to people/monsters that your divinity countered and you'd hit them more easily, and likewise the reverse was true for making it harder.