I don't know where to go next in Elden Ring! How do I find out?

The story telling in FromSoft games is cryptic at best, but in Elden Ring, you seem to need to talk to the NPCs just to figure out where to go next. The issue is, a lot of them are hard to find and easy to miss, and even if you do find them, you gotta be paying attention to what they're saying - because they do not repeat themselves. It's at this point that I'm keeping a journal to keep track of what everyone has said, and where they are so that I know where I should be going.

Is there an easier way to manage this? An NPC I should talk to to find out where I need to go next? (I want to keep my first playthrough wiki-free if I can)

EDIT: to give an example, the Glintsone Key is a fairly important item that needs to be found in order to progress through the game. I can follow the trails from the sites of Grace, but it won't get me through the gate(s) to the Academy, nor point me to the Item(s) I need in order to progress. A couple of NPCs mention a Glintstone Key, but I was either not paying attention when they first mentioned it, or they didn't give any clues as to its whereabouts. I had to ask a friend for clues.

PS: I am playing offline, so I cannot rely on messages left by other players.

I think you may be missing the purpose of the game. Elden Ring is a true open world game. That means you can go anywhere and do anything. The answer to "where to go next?" is wherever you want!

When I am unsure which area to approach next, I reference Fextralife's Game Progress Route

There's a map on that page that has minimal spoilers and offers recommendations on appropriate levels and weapon upgrades to have for each area: 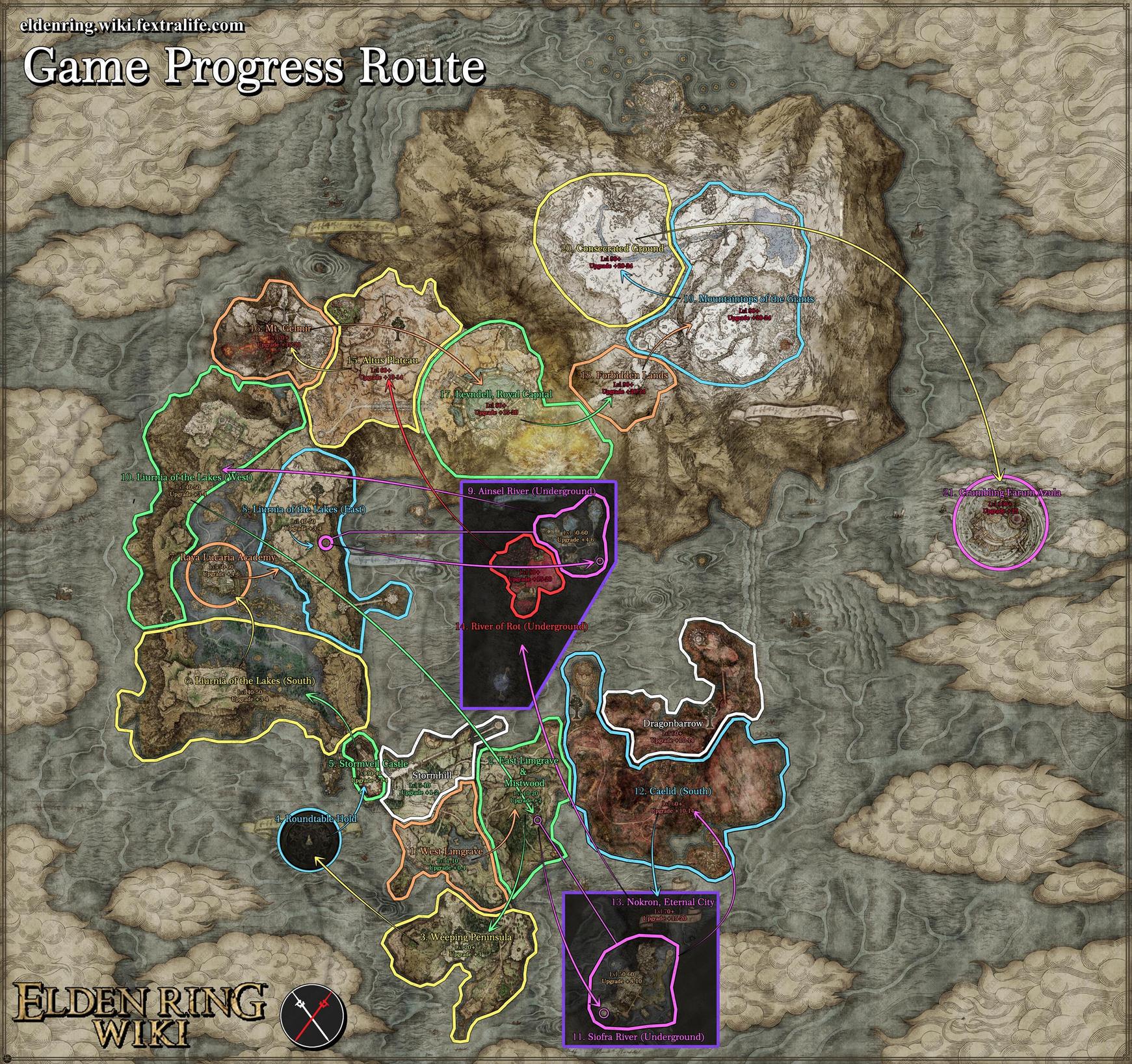 I generally prefer to just use the map rather than detailed guides. If I get stuck, I make a note of it in my notebook to return later.

I just started the game as well and this is my first game of this type and I would say I'm at the same position. Sites of Grace show you where you should be going with that dust like line at the "camp", an NPC mentions this as well if i remember correctly. For example at the beginning of the game it will "lead" you to Stornmveil Castle but i strongly recommend to explore all areas before going there because you really need to get some gear and levels to be able to pass through. I embraced the whole exploration side of the game to progress organically...

It's as simple as this really: pay attention.

As I provided in my example, I did not know where to find the Glintstone Key to enter the Academy tower. However there is an Item that does point the location out - the "Meeting Place Map" which does indicate the area you need to look. In my first playthrough, I picked up the item, but did not pay attention and missed the tool tip to investigate this item.

And to answer your exact question, you would have found a corpse near the Raya Lucaria gate. If you loot the corpse it will give you a drawing with the description, "The map was received from a person from Raya Lucaria. The marked Location must be important" And if you can find the location shown in the drawing you will get your Glintstone key.

And for the general question, you can always follow the sites of grace. For example, in this case, by strictly following the sites of grace you directly obtain a map indicating the location of Glintstone key. And as for NPC quests, you can keep journals, but it's ok not to keep it. You will miss things, but usually if you are going back and forth and talking to people again, you will progress through them. For example if you had talked to Rya in the lake gazebo, and you had forgotten about her, just if you follow the sites of grace, you will arrive at the next location after Raya Lucaria being Volcano manor. And she will be there. So don't worry much about missing things. You can keep a journal but don't stress. It's meant to be surprising when you discover new things by accident. It's not meant to be followed point by point with a through exploration.

Not the answer you're looking for? Browse other questions tagged elden-ring .