What does the embossed text say on the "empty milk bottle" in Fallout 4?

I know its a trivial detail, but I'm genuinely curious and struggling to find the answer. 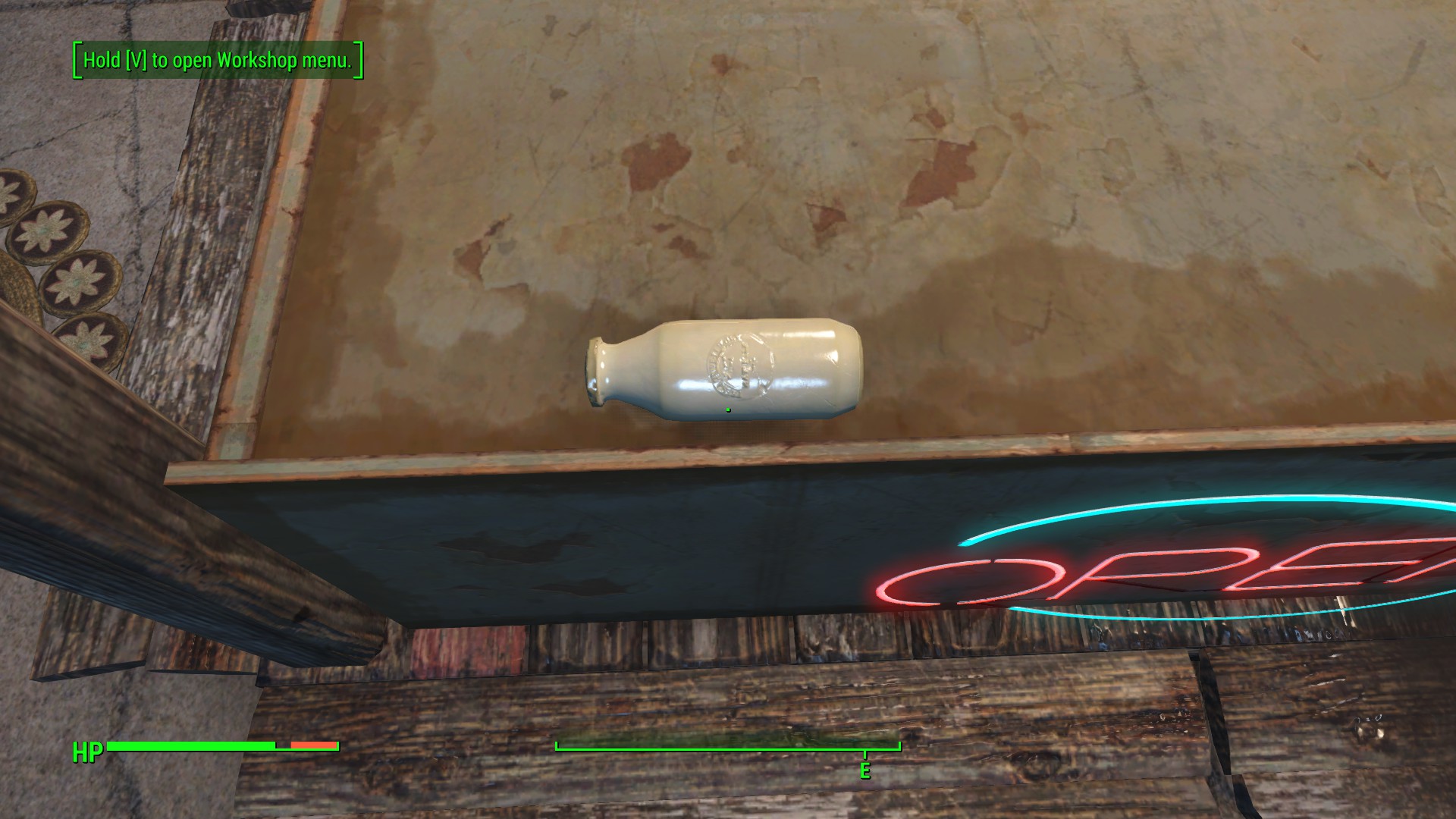 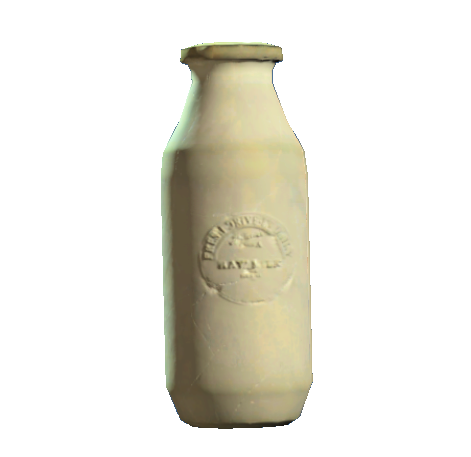 The Fandom page had a better, larger picture, but I still couldn't tell what it said. However, the description of the item says:

The empty milk bottle is a cylindrical, white glass bottle with the company's logo built in to the bottle's shape.

So I thought, "Great, all I need to do is look at the company's logo. Where do I find the company logo, though? Aha! From the vending machine!"

So I then looked at the Fandom page for the milk vending machine. However, this was less enlightening than I had hoped. The company named on the vending machine is "Little Cobb Creamery", which, as far as I can tell, doesn't seem to match the embossed text on the bottle.

Alright, so that didn't work. Maybe if I search for Little Cobb Creamery I'll learn something? From the company's Fandom page I only learned this:

They owned many milk vending machines across the streets, as well as at least one creamery, which provided milk for the Medford area.

Fortunately, "creamery" was a link to the Fandom page for Parsons Creamery. However, the page was not terribly informative.

Comparing the text to the name "Parsons Creamery", I thought I was on to something at first: I could see an argument for the letters "P-A-R" (depending on the typeface), but when it came to the supposed "S", the embossment looks a lot more like a "T" to me. So I don't think it says Parsons Creamery, either.

For me, this is where the trail runs cold. What does the embossed text say?

The other answer has some great imagery of the texture of the bottle from the game files. See that answer for the details.

I found this larger image, originally sourced from seekpng.com. I've circled the words that I was able to make out: 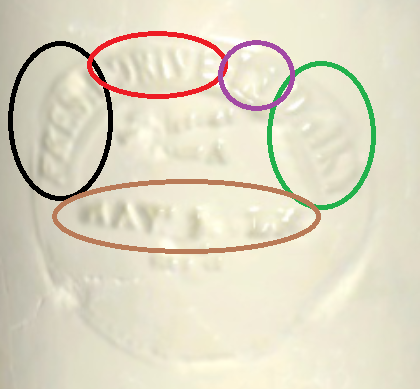 A higher contrast image can be seen here.

I'm pretty confident in the following:

As for the brown circle, I think it might be either an expiration or packaging date, possibly saying "May 1" and then the rest looks like the letters "LK". I originally though LK might be Roman numerals for the year part of the date, but "K" doesn't exist in Roman numerals. Alternatively, I can also see it saying "May Milk", which perhaps is the "company" that produced and packaged the milk, but no Fallout lore I've found has any reference to this name. From comments, it's been said that it looks like "Hay Milk", which in the dairy industry, would denote that the milk came from cows primarily fed dry hay. Some other comment pointed out "Raw Milk" and this seems to be what the text is (see other answer)

From some research, seems drive-in dairies were kind of like convenience stores of the 1940s and 1950s, which would suit the Fallout time period/theme (prior to the world being destroyed that is). One real life example I found was Rockview Farms. Their history page even shows pictures of what their drive-in dairies were like.

So, "Fresh Drive In Dairy" makes sense to me to be written on the bottle as a slogan of some sort. As for the rest of the words, it's way too small/blurry to make out. The part above the brown circle I can make out a capitalized "A", making me think is could say "Grade A" for Grade A Milk.

Everything else is small and blurry. The upper bit appears to be a hand-written bit. It might say Parsons Grade A, but I'm not sure. I have no idea what the lower bit says. 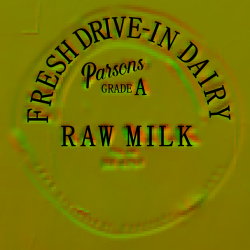 There are also full and pre-war versions. 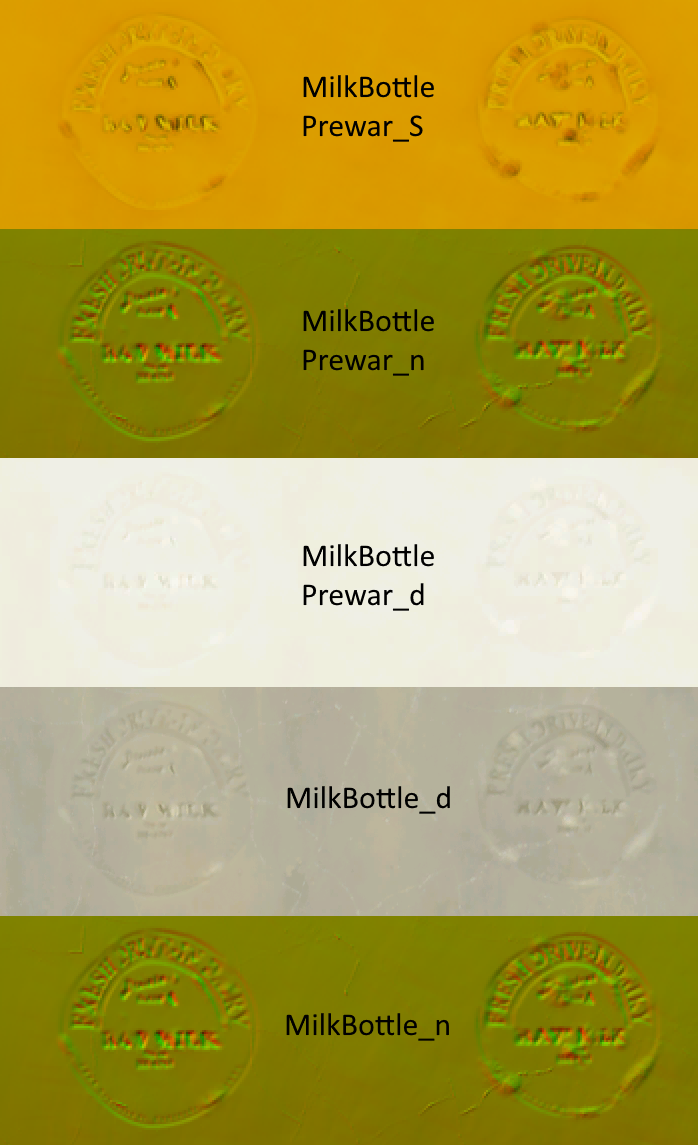 Here's a version I dramatically increased the contrast on that might or might not help at all. 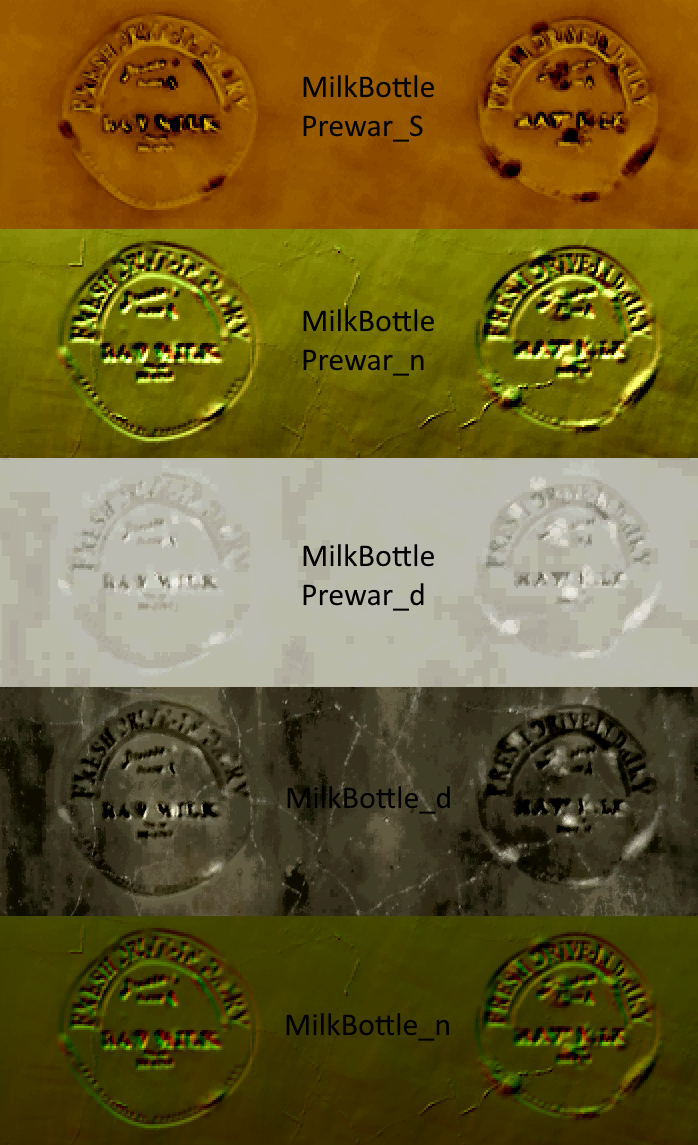