In the NES Game, StarTropics, in Chapter 4 - right after you escape the whale with Baboo, Nav-Com tells you to "Input Frequency!!": 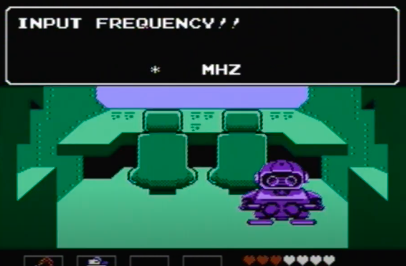 There does not seem to be any indication in the game for what the frequency should be.

The only clues come from Baboo's recalling of Dr. J's last words, "Tell Mike to dip my letter in water..." - complete with a "Do you understand?" prompt. If you say you don't understand, he tells you that "Dr. J sent you a letter with a map of C-Island a few weeks ago!" 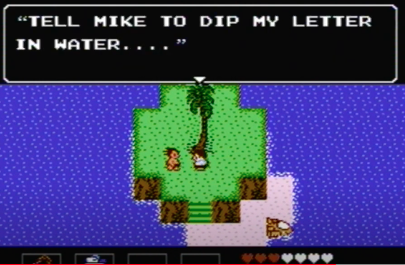 Enter the number "747" as the frequency to continue with the game.

There is no way to find this information within the game (see Full Answer below).

This is a question that one of my kids brought to me while playing the games that I grew up with, and - while you can find the following information on the internet - I thought it was worthy of documenting within Arqade. Interestingly, the method for getting the frequency has changed over the years.

To be able to continue with the game requires knowledge of a 3-digit code that originally was included as a hidden message on a piece of paper that came with StarTropics when purchased new and unopened...

From the original instruction manual:

Notice the footnote in the bottom right corner: "Please read the letter from Dr. Jones appended to this booklet."

Here is an image of the paper that was appended to the back (image credit): 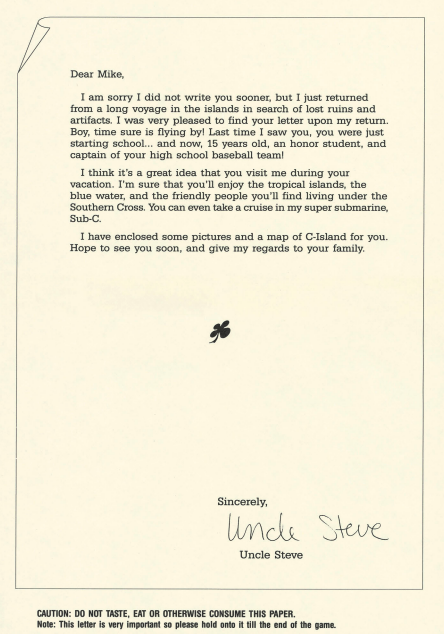 The basic gist of the letter is that Uncle Steve is responding to Mike and inviting him to visit him on C-Island. I will emphasize the extra words in the footnote at the bottom: "Note: This letter is very important so please hold onto it till the end of the game." As a kid, I remember thinking it was really cool to have this extra paper that was somehow important to the game.

Now that we know about this physical letter, Baboo's cryptic message makes more sense. When the paper was made wet with water, a hidden message would appear (image credit): 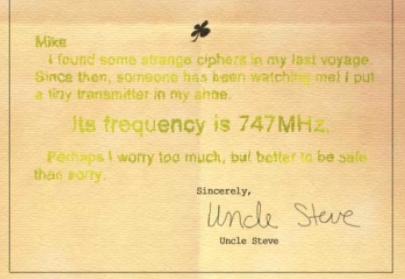 This was a real world component to a video game! Definitely a fun experience as a kid. Nowadays, you will likely buy the game used without the original packaging and manual - and crucial letter to Mike from Uncle Steve!

The content of the secret message in the letter contributed to the whole secret spy feel: Uncle Steve felt as though he was being watched and took a precaution to put a "tiny transmitter in [his] shoe" which was tuned to the frequency of 747 MHz.

When Nintendo released StarTropics for the Wii/Wii-U Virtual Console, they included an electronic version of the original letter in the Operations Guide, complete with a way to virtually "dip" the letter in water (by clicking on an image of a bucket of water) to reveal the necessary frequency:

Here is a video of what it looked like to dip the letter on the Wii. (Thanks to @Showsni for the video link.)

It is interesting to note that this virtual dipping only gave the minimum information to continue in the game (frequency 747 MHz), and did not include the hidden message from Uncle Steve revealing his (justified) paranoia and tiny transmitter. 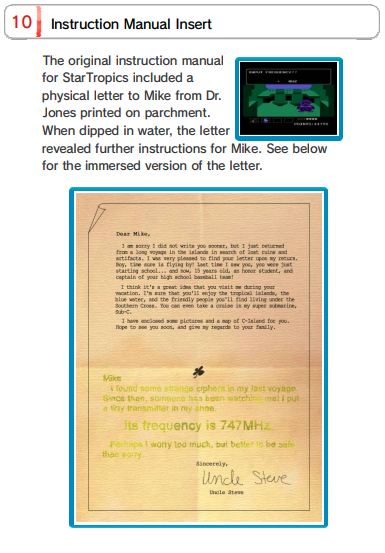 This gave all the same information as the original printed paper, complete with the secret message communicating Uncle Steve's spy-level precautions.

When the game was released for the Nintendo Switch Online, they apparently omitted any copy of the letter (virtual, digital, or otherwise). Oops!

Players who don't have any context to where that frequency was supposed to come from are forced to search online and find this answer:

As we have learned from the above, the frequency that Nav-Com should tune to is 747 MHz. Entering this number will allow you to continue the game of StarTropics past Chapter 4.

Not the answer you're looking for? Browse other questions tagged nes startropics .

68
What is the average battery life of an NES cartridge?
17
How can I replace the NES cartridge battery?
11
How does the Nintendo NES Four Score work?
4
NES screen blinking without a game
5
Is there in-game differences between 3 and 5 screws NES games?
33
How to find a specific NES pirate, unlicensed or bootleg game information?
10
How do I remove rust on my NES motherboard connector?
1
Garbled Graphics NES