How exactly were players meant to figure out special moves in games such as Street Fighter II?

I don't think I ever read the manual to any of those games, but maybe they contained a full list of all attacks per character?

And in the arcade, maybe it said them on the machine?

So it was all about memorizing and then the dexterity of doing it quickly in the game? Or was it also about actually discovering the right combination by aimlessly mashing buttons endlessly? I was never able to do any special move no matter what combination I tried in any of those games, except for some basic ones and only by accident.

Basically, would reading a guide online listing the attacks be cheating and bypassing the point of the game?

I was a kid back when Street Fighter II came out, and the Arcade Cabinets I saw did not have any moves on them, you just had to figure it out.

Though research on the internet suggests that the console version on the SNES did apparently have a list of moves in the manual, so other console versions may have.

As for similar games, I recall having to use a notebook and write down the moves we figured out for Mortal Kombat. That and buying gaming magazines (the internet wasn't much of a thing back then).

Even back before the days of wide spread Internet access you could often buy magazines/guides that listed the moves for stuff like this, so I doubt anyone cares about this being "missing the point".

The moves weren't listed on the cabs until later versions of the arcade. SF2:WW continued the Japanese tradition of hiding things in their games that rewarded a player for trying to truly master the game.

I.e., in Pac-man there's a hidden mechanic where Pacman can cut corners while the ghosts cannot. This allows Pacman to outrun even the fastest ghosts by zig-zagging through the maze.

In Donkey Kong there's a hidden mechanic where Mario can climb the ladder twice as fast by double-tapping up.

Nowadays the motions are intended as part of a balancing factor for an attack's strength and utility, and "the real game" part of fighting games is less about playing the game than playing the other player.

I first played Street Fighter II (world warrior) in the arcade around 91/92 time, before getting it as a pack-in game with my Super Nintendo.

I can't remember if the arcade cabinet had the moves printed on the cabinet in the version I played or not, but I remember being fluent with at least Ryu and Kens moves.

One thing to remember is that from the get-go SFII was getting major hype. This meant that it was getting extensive coverage in game magazines.

I would suggest that most people (including myself) learned the moves from magazines and word of mouth.

Word of mouth in the arcade especially as the SFII cabinet usually has a crowd of people around it waiting for their turn or simply watching the action, and many of these people were not shy about giving advice on how to play the game.

The first console version was the SNES (I think) in the NTSC and PAL versions of the games, the special moves were printedin the manual, which you can read here.

Extract from the manual: 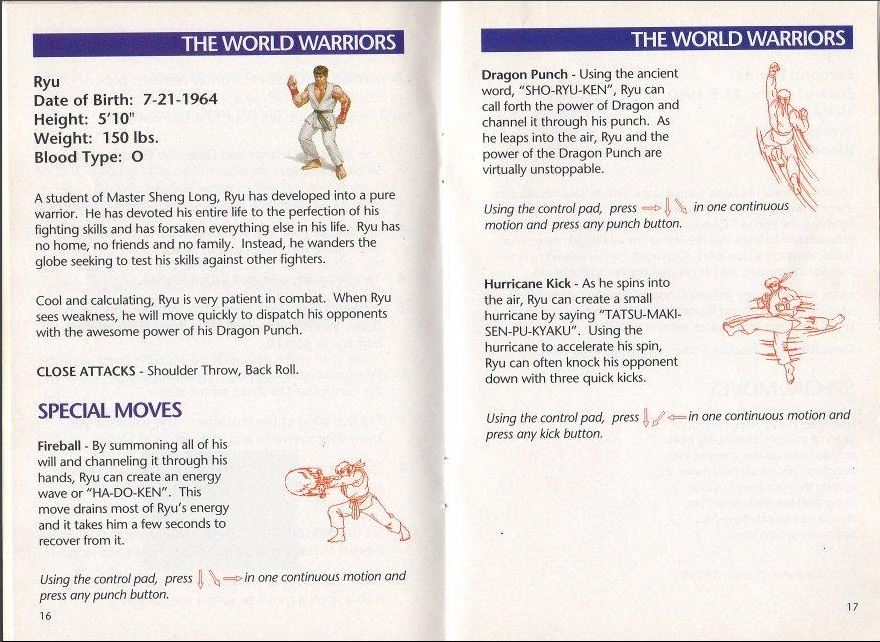 There were many ways to discover moves.

Gamers would methodically try combinations with different characters to discover new moves. These spread by word of mouth amongst local communities, which further spread globally.

Media would publish marketing pieces from the studios, or similar material produced in house. Studios wanted to build hype around their product to improve sales, so they would put out marketing with character biographies and moves in magazines. The magazines themselves wanted to sell ads, so even if a studio was not paying for the material it was in their own interest to write material covering top games. Books, play guides, and similar were also available with varying degrees of studio involvement.

While the modern Internet world wide web as we know it today did not exist, the pre-web Internet was thriving. Enthusiasts had access to pre-web communications such as Gopher, IRC, and messaging forums to exchange information on any topic including gaming. This was also the heyday of BBS bulletin board systems, which individually may or may not have also linked various types of Internet sources with more local content. It was easy to publish or download a walk-thru or study guide for many games.

For Street Fighter II specifically I recall my roommate staying up for hours many nights reading forums and studying downloaded FAQs, then dropping quarters like a waterfall at the arcade during the day.

In the arcades, some fighting games would list some of the moves on the cabinet, and sometimes list them in-game (such as on the demo when it is not being played, showing a few moves and the button inputs required).

Basically, would reading a guide online listing the attacks be cheating and bypassing the point of the game?

By this logic it would be "cheating" to play the game without a guide for 40 hours while your friend has only been able to play for 10.

Without practice and reproducible success, both button-mashing and reading a guide are useless methods of knowledge acquisition.

Cheating would be something more like a pre-programmed macro controller which requires just a single button press to execute a 7-button combo.

Albeit, if both players have a macro controller then it's no longer cheating but it certainly does bypass the point of the game.

However, if you were to ask:

Special moves are one thing. You can figure those out given enough free time and time spent playing the game. You just have to play it enough. I was able to figure out Marvel vs Capcom 2 and that was Playstation 2 era so long past the era of arcades.

It can also actually works against you in the beginning to be too coordinated. Mashing buttons you did not mean to mash can trigger special moves which tell you something is there and approximately what you did. Then you hunt it down.

But things like Finishing moves like Mortal Kombat are an entirely different story since the sequence is much longer, are distance dependent on your character and you only have a limited time window per fight to enter them. I think magazines were the source for these. They can be difficult to execute even if you know the combination.

Not the answer you're looking for? Browse other questions tagged street-fighter-ii .