What does the Piercing damage type do in Deep Rock Galactic

So with the latest Season 2 update, new weapons were added into the game. With that, a new damage type appeared unde Miner's Manual > Overview > Combat > Damage Types: the Piercing damage type. 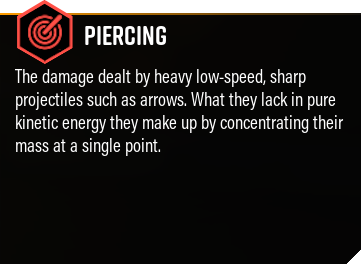 The tooltip says that this damage type is dealt by "heavy, low-speed, sharp projectiles, such as arrows", so it's pretty safe to assume this refers to one of the new weapons, the Nishanka Boltshark X-80 crossbow for Scout.

I was curious about what this damage type exactly does, but the Damage article on the wiki isn't quite caught up yet and has no mention of it.

Only the crossbow's wiki page mentions that because of dealing Piercing damage instead of Kinetic, this weapon deals 50% less damage to Oppressors and 30% less damage to Praetorians, but that was about as much as I was able to find.

When playing the game, I've noticed that the crossbow's damage tends to vary greatly. It appears as if the crossbow is capable of damaging Praetorians even through their heavy armor, though losing a big chunk damage in the process - this is noticeable when hitting Praetorians in the head, which is not a weakpoint, but also not armored. Hitting them in the back seems to deal even more damage than in the head, which makes me believe the default bolts have some bonus weakspot damage too, even though this is not mentioned in the weapon's stats in game.

How does the Piercing damage work? Does it just ignore armor (or does the reduced chunk of damage go into the armor, capable of breaking it)? How about the unbreakable armor of Oppressors? And how about Dreadnoughts?

Thanks to this reddit post detailing the workings of the Nishanka Boltshark X-80 crossbow, I was able to figure out answers to the questions I outlined above. Big thanks to @Timmy Jim for pointing me to the post in their comment!

How does the Piercing damage work?

Normally. Everything suggests that the Piercing damage doesn't have any special properties from Kinetic, aside from individual resistances/weakness of some enemies (i.e. Praetorians and Oppressors being resistant, Mactera being vulnerable). This is presumably just a balance decision made by the developers.

Does it ignore armor?

Does the reduced chunk of damage go into the armor, capable of breaking it?

Considering the previous remark, yes and no. The full Piercing damage component goes into armor as there is no "reduced damage". So technically it is possible to break enemy armor with it, however, the armor-breaking multiplier of the crossbow itself is unknown, to my knowledge.

How about the unbreakable armor of Oppressors? And how about Dreadnoughts?

Just as with the PGL, the same thing applies - the radial component goes through, the direct component gets absorbed.

Not the answer you're looking for? Browse other questions tagged deep-rock-galactic .

3
How does the Cryo Cannon's ‘Fragile’ upgrade work?
5
What are the rules for XP/gold gained, especially for mission requirements?
9
What do the various beers do?
3
Can I do a Deep Rock Galactic promotion assignment on a different class than the one I am promoting?
4
Does Pots O' Gold in Deep Rock Galactic yield a bonus for mining behind minerals (collapsing)?