Button mapping for PC-Engine on Fightcade2

I am using Fightcade 2 to try playing retro arcade games

One of those games is a PC-Engine / TurboGrafx-16 game

I am using a Nintendo Switch gamepad with Fightcade

For some NeoGeo games, the button mapping window is very specific, like P1 LightPunch, P1 LightKick or something like that for Street Fighter 3rd Strike for example

The mapping on the start and select buttons work just fine as I can pause in game, but my mappings for the six action buttons, it seems like it doesn't as only the mappings to Button 1 and Button 2 are responding, but my character seem to do the same thing whether I press the one or the other: a heavy kick

I have not tried mapping on the keyboard yet 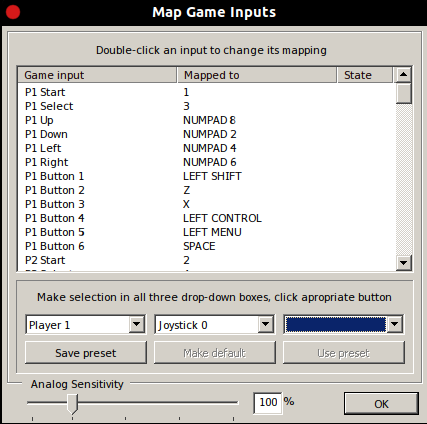 Can anyone give me an input mapping that would work?

1
How can I use a controller (designed for PlayStation) on a PC, with Xbox layout?
1
Analog movement when emulating keyboard/mouse with Steam controller
8
MAME shows 'the selected game is missing one or more required rom or chd image' error message
5
What are the differences between the TG16 games "Time Cruise" and "Time Cruise II"?
5
Why do some PS1 games not recognise the controller when the Analog button is pressed?
7
My two different controllers don't have the same button recognition ingame
1
If we do not have gamepad with autofire, can we have autofire anyway while playing games in steam?