While playing GTA: San Andreas today, I got to the Low Rider Challenge. It's seemingly impossible to beat this, as no matter how well I do, my opponent seems to one up me. I don't particularly care how I beat it - I just want to get to the next mission. How can I possibly accomplish this?

That was one of my favorite ways to make some cash.

Only advice, make sure that as the directions come along the screen that you hit AS they pass through the Circle. Not before, not after... make sure you're getting "awesome"

There are actually a couple missions where this same process applies.

The game's timing for the rhythm sections, (especially the Lowrider challenge but also when Dancing), is off by a fair amount. Even on the old PS2 version running on a CRT (with little to no image preprocessing), the off-beat display of the buttons in the sweet spot is noticeable.

From my years of playing, the beat seems to be about 0.4 of a second off from the music in the Lowrider challenge, and closer to 0.2 off in the Dancing sections. You need to almost ignore the beat of the music, follow the incoming buttons, and press slightly after when you should. 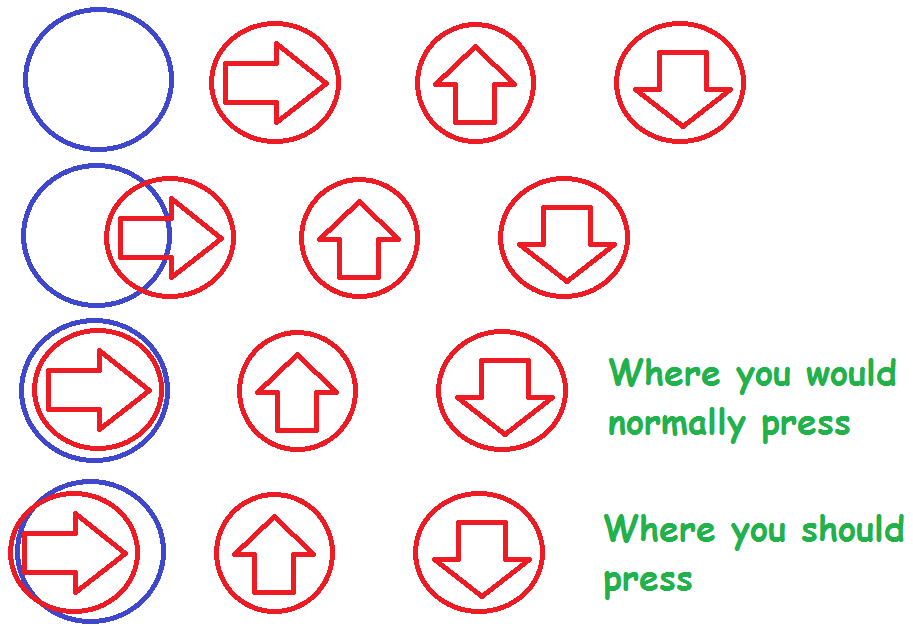 Normally you would push to the beat of the music, which (ideally) would be represented by the middle of the blue circle. However, you need to hold off just slightly enough to press the button as it leaves the circle.

Personally, for years I actually muted the game during the Lowrider challenge as I found it that distracting, it took me a while to be able to pass with the music on.

As always, practice makes perfect, so save beforehand and just repeat the challenge over and over. Pattern memorization also comes into play, as the buttons are in the same order every time.

Contrary to the right honourable ap_sims, I found it easier once I stopped concentrating exact position of the arrow in the circle, and just listened to the music (whatever you think of it). Press the keys on the beat. The same applies to the other dance mini games.

Not the answer you're looking for? Browse other questions tagged pc grand-theft-auto-san-andreas or ask your own question.

0
How to beat the time challenge in the first level of Dale and Peakot?
4
Low sound problems
10
Can I eliminate low-res Texture Pop-in?
8
Fallout 3 runs better on medium settings than low?
3
Low FPS and Performance Issues During Gameplay
3
How is Lung Capacity calculated?
3
What's the cause of consistent stutter in Quake4 across PCs?
4
How to circumvent game breaking bug in GTA: San Andreas (PC)
0
Dark Souls 2 Shutting Off Laptop on Low
2
Why is "Recruit" not working for Sweet's mission "Los Sepulcros" in GTA: San Andreas on Windows 10?