What should I look for when upgrading Nintendo Switch microSD storage?

For someone considering upgrading the storage of their Nintendo Switch — taking into account that a newer version of the Switch may be released in the future that supports microSD cards with faster read/write speeds — what should I look for when deciding which microSD card to upgrade to?

Excerpt from "The best Micro SD cards for Nintendo Switch 2022":

The console only supports UHS-1 cards, which have a maximum possible speed of 104MB/s, compared to the 312MB/s speed limit of the more modern UHS-2 standard.

The fastest MicroSD Cards will have a minimum speed class labeled V30, UHS-ii, and Class 10 on the SD Card’s details from the manufacturer.

The following types of microSD cards are supported on Nintendo Switch:

In order to improve your gameplay experience, using a microSD card with a higher transfer speed is recommended.

In order to get a microSD that will be as fast as possible, but also hopefully work with future Switch models, what specs should one look for?

There's not much point investing in storage if it's just going to end up being sub-par speed in the near future. If spending a little more now means not having to purchase a new card once faster ones are supported by the Switch, that makes sense to me. And although any talk about future hardware is speculative, perhaps those with a sense for where standards are heading (and how quickly) can offer some advice?

In order to get a microSD that will be as fast as possible, but also hopefully work with future Switch models, what specs would I want?

Based on the following assumptions:

You'll want to buy the fastest SDXC card (up to 2 TB) possible.

According to this site:

UHS-II cards are backwards compatible and can be used in any card that supports SD cards, but the cards operate at lower speed.

So the Nintendo Switch should be able to read UHS-II cards as well.

Also, according to Wikipedia, a new bus speed specification was released in 2018 named "SD Express", supporting speeds beyond UHS-III.

So the Nintendo Switch should still be able to read those cards.

Do note that UHS-II and newer achieve their higher speed by introducing a second row of pins [Source]: 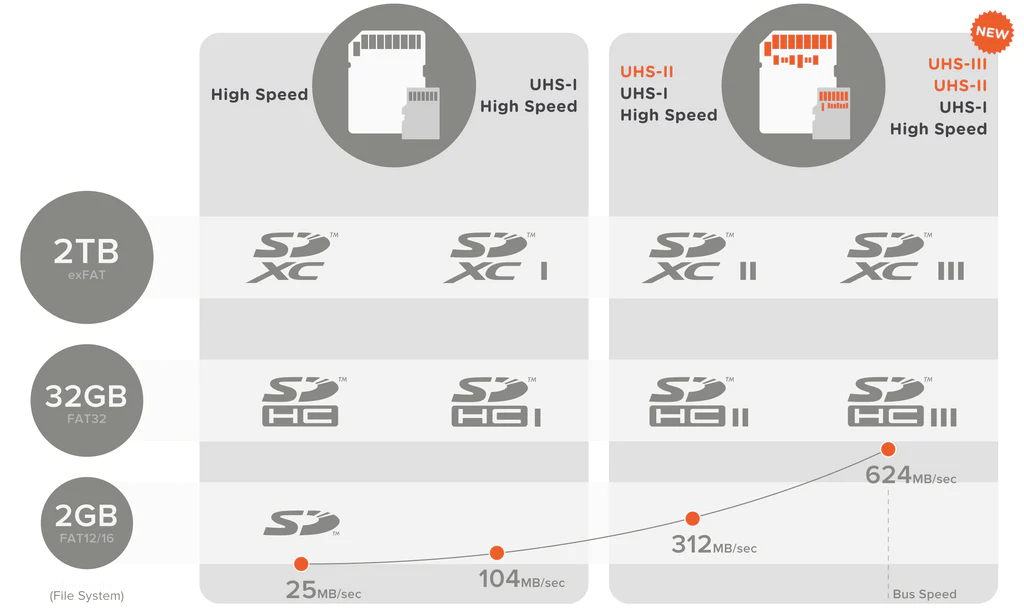 The Express bus re-uses the pin layout of UHS-II cards and reserves the space for additional two pins that may be introduced in the future.

These additional pins may increase the cost of an SD card. Considering the Nintendo Switch doesn't support them, it makes sense for Nintendo to recommend UHS-I over UHS-II for economic reasons.

As to whether Nintendo will support UHS-II or higher in the near future, if at all, that's another story entirely.