What strategies should the Protoss use against mass Medivac/Marine/Marauder?

I understand that prevention is better than cure but sometimes the game gets a little late and when I'm in this situation it's very hard to counter as Protoss. The picture below almost makes his ground troops invincible as if he typed power overwhelming. 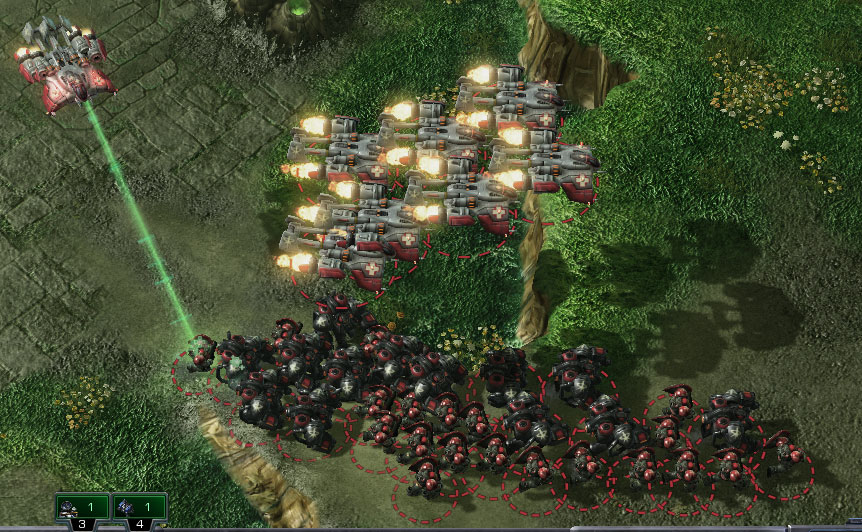 How do you usually counter this?

Edit: Thanks to all of you, I am able to finally counter it using mass Zealot + Colossi :

As a Protoss, you need to focus on a few objectives when fighting against bio Terran:

Some things you need to be doing:

Some other exotic things:

PvT is all about quick upgrades, tech switches, and strategically planned engagements. You need to be controlling the flow of the battle in order to be the last to gg in the end.

You'll need splash damage against this kind of army, because otherwise the Medivacs will heal up the army so fast, you won't stand a chance without hitting a lot of the bio units at once (hence splash damage).

Colossus and/or High-Templar with storm are great choices vs. bio. Maybe mix in some Archons (they also deal splash-damage and are great tanks). Use sentries to slice off parts of the bio ball or prevent them from running out of your storms. Colossus is probably a bit more beginner friendly than Templar.

In any case, you should have a large gateway army with good upgrades that can serve as a buffer between the MMM-ball and your splash-damage units.

In the very early game, usually before Medivacs, good Sentry usage is key: you don't want to allow the Terran to kite your units. Trap the escape route with forcefields then block him in with Zealots. Zealots (minerals) are expendable, but everything else is much less so- you don't want to lose gas units so retreat with them early enough to escape if a fight looks lost. In full out battles, be sure to use Guardian Shield to seriously cut into his damage.

MMM is most dangerous in TvP before you have splash damage (Archons, Colossi, or Storm) and during that time I personally find both Immortals and Chargelots to be very effective. They tank a ton of damage and can deal great damage against Marauders and Tanks. Make sure to focus Immortals on proper targets during battles; with 6 range it's much easier to do so.

In midgame, Upgrades are also extremely crucial, you absolutely need to be ahead of him in upgrades at this point because you don't have the splash damage to just melt stuff that comes within range. Chrono Boost the hell out of those Forges and the Twilight Council.

In the lategame with 200/200 3/3 armies, it all comes down to EMP versus Feedback/Storm. Use observers to keep an eye on his army and ensure he doesn't get any significant cloaked EMP's off, and send single High Templars to feedback and kill idle Ghosts from high ground or fog of war. Keep your army and especially your energy dependent units somewhat spread out in order to minimize the damage an EMP can deal to it.

Protoss, in my opinion, has an enormous advantage in these lategame engagements if they prepare properly: with tons of Gateways you can reinforce with 30 supply of Zealots in 5 seconds, or a similar supply of Archons in 10 seconds.

As others have said, splash damage is the best way to counter this. But I would like to suggest a tactical solution. 5 sentries, and as many phoenix as possible.

With sentries you can block the ramp indefinitely, and the phoenix will pick off any medivacs that fly past the army. Then harass the medivacs if they decide to pick up the units for a drop.

If you see the chance you can start picking off marines with gravitation beam if safe. If his army retreat you can always pick off the medivacs and harass his base by picking on mules and scv's.

I'm afraid you can't afford to be "late" because the only method to counter mass Marine + Marauder with Medivacs is high tier units. I know - it's a bit annoying that tier 1 Terran units can be countered in ZvT almost only by Banelings, but in PvT high tier units like Colossus and High Templars are required.

This Terran army composition (especially with 3 3 upgrades) isn't counterable with just an A-move - you need good micro as well. So the best way to counter it is to have a lot of "chargelots" (Zealots with charge) in front and then a few Colossi in back to deal high amounts of damage while the Terran is busy with the Zealots.

You can also try to use some force fields to block them from retreat and throw in some psi storms. If you have enough High Templars you can eventually deal with Medivacs by using Feedback on them.

7
Can protoss counter mass marines in the open?
15
What is the best Protoss counter for mass Stalkers?
5
Strategies against zerg when playing protoss
15
Why do Terran players use the Marine blob micro move?
9
How do you protect against Zerg and marine rush as Protoss?
12
What are Protoss counter options to Mass Marauder?
9
Can the Protoss Mothership Mass Recall Allies' units?
15
What is the correct method for the Marine Stutter Step?
3
Good practice for protoss player against MMM in PvT